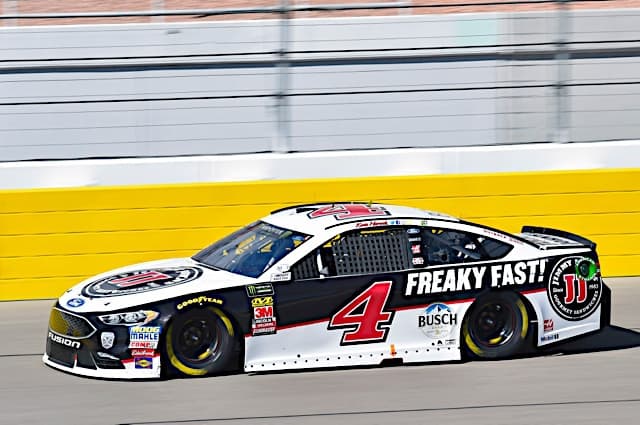 Stewart-Haas Racing’s No. 4 team received an L1-level penalty Wednesday (March 7) after two violations were found on Kevin Harvick‘s race-winning car during teardown at the NASCAR R&D Center in Concord, N.C.

NASCAR’s punishment to the No. 4 team is as follows. Harvick will not get the benefit of the race win towards playoff eligibility. He also loses the seven playoff points he earned Sunday by sweeping the stages in Las Vegas.

Crew chief Rodney Childers has been fined $50,000, and car chief Robert Smith has been suspended for the next two races.

The team was also docked 20 driver and owner points. Due to the penalty, Harvick falls from the points lead to third, 17 points behind Joey Logano.

According to NASCAR.com, officials decided to suspend Smith instead of Childers because the car chief plays a more prominent role in dealing with the intricacies of the car each weekend.

This is the second consecutive week that Harvick’s team has received a post-race penalty. After NASCAR found one loose lug nut following the Folds of Honor QuikTrip 500 at Atlanta Motor Speedway, Childers was fined $10,000 for a safety violation.

Stewart-Haas Racing has the ability to appeal the penalties to the National Motorsports Appeals Panel. As of press time, they have not indicated whether they will appeal or not.

Additionally, the No. 55 Premium Motorsports Chevrolet driven by Joey Gase received a safety violation of its own after it was caught with one loose lug nut during post-race inspection. Crew chief Todd Parrott received a $10,000 fine.

So…..They keep the purse money. Keep the trophy. Keep the play off spot. My boys standing in the corner or getting their mouth washed out with soap seems a little harsher.

No they dont get to keep the playoff spot

…..So does NASCAR still call this type of thing a “cucumbered” win? What is the new term…lol. Wonder if they would ever dream of doing this to a Toys, THE PAST FEW YEARS…lol. Not so far.

Not sure I agree with no suspension for the crew chief. Isn’t the crew chief ultimately responsible for anything that the crew does? Regardless, Havrick already has his playoff win from Atlanta so none of this really matters (although those lost playoff points could make a difference come September).