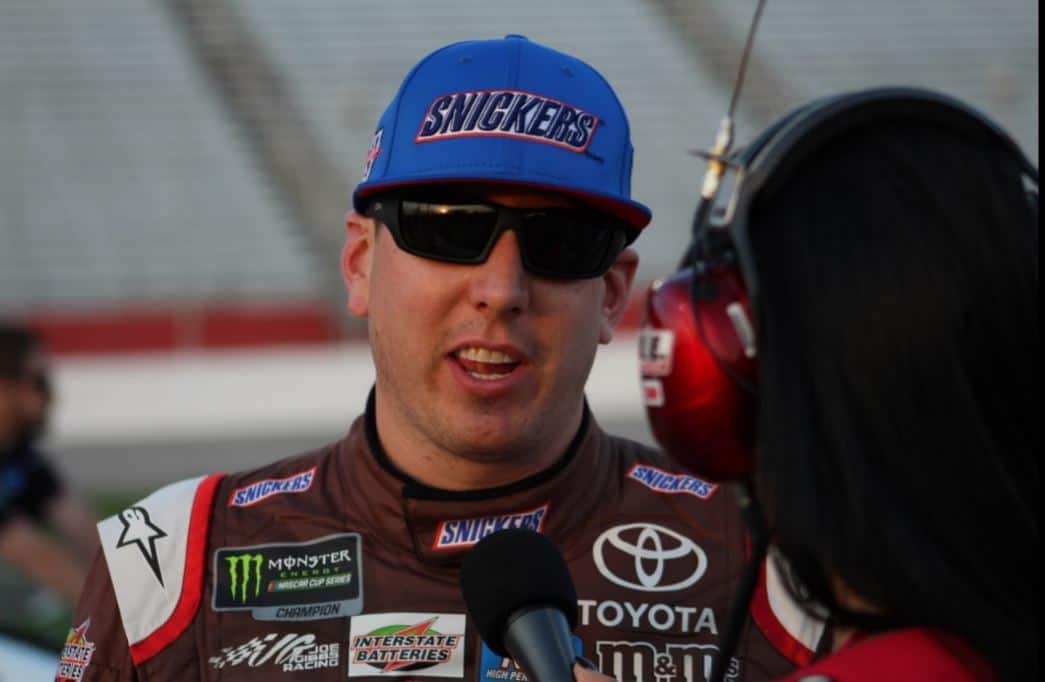 Kyle Busch is helping raise the next generation of drivers (Photo: Zach Catanzareti)

Whenever Kyle Busch starts on the pole or wins a race in the NASCAR Camping World Truck Series, Twitter lights up with all sorts of criticism of the driver/owner at Kyle Busch Motorsports.

One example of many: “Why you’re even competing in the trucks is beyond me. Let others have an opportunity that YOU already have! How many more lower level trophies does a full-time cup regular need?”

But the problem with this argument is that Busch has given plenty of other racers opportunities. Consider for a moment just how many drivers have competed in Kyle Busch Motorsports equipment in the Truck Series alone. Since its inception in 2010, the organization has hosted quite a few drivers, including the budding Cup stars.

Teams move drivers through their organizations all the time. Why is KBM any different? Simple. Four of today’s up-and-coming Monster Energy NASCAR Cup Series stars came from Busch’s team, and so did the driver who’s won the pole for the last NASCAR XFINITY Series races.

It’s still plenty early in his XFINITY career to gauge how Christopher Bell will perform long-term, but the 2017 Truck Series champion has already impressed while behind the wheel of Joe Gibbs Racing equipment in the series. Having scored his first career victory last season, Bell is in good shape to excel this year. That’s not to say there won’t be a learning curve. His first year with KBM wasn’t incredible, however, it wasn’t as awful as it seemed while it was overshadowed by the success teammate William Byron had that year.

Speaking of Byron, that’s another driver KBM has brought to the NASCAR fold and will likely have around for many years to come. After winning the 2016 Truck Series championship, he made the move to the XFINITY Series and promptly scored the championship there in 2017.

This year, Byron made yet another step up in his career, this time to the Cup Series where he’ll remain for many years to come, barring some epic unexpected collapse by the driver who’s shown to be relatively invincible once he gets past the learning curve.

Another first-year driver in the Cup series comes in Darrell Wallace Jr., who had an emotional runner-up finish at Daytona. Sure, he’s had his struggles along the way with sponsorship sidelining what had been a hopefully full-time season last year in the XFINITY Series. But after a successful time subbing for an injured Aric Almirola this season, he’s now full-time with Richard Petty Motorsports. It remains to be seen whether Wallace can help RPM become relevant on a regular basis again, but he’s yet another driver that came to Cup by way of KBM.

Meanwhile, the 2017 season saw former KBM Truck Series drivers Daniel Suarez and Erik Jones, both KBM alumni, battle it out for Rookie of the Year. Neither one has found Victory Lane in the Cup Series yet, but that’s not to say they can’t or won’t in the foreseeable future.

Not enough for you? How about last season when Ben Rhodes called racing against Busch for the lead a “dream come true?” Interestingly enough, Rhodes was also able to elaborate, explaining how much he learned from the 2016 Monster Energy NASCAR Cup Series champion.

Need a more recent example? Look no further than Robby Lyons commenting about Busch’s presence in the Atlanta race.

Unpopular opinion but I really like racing with @KyleBusch and learned a ton from being on track with him this weekend. Like needing to close up on the pace truck. ??? Look forward to having him back in the series and appreciate his commitment. ??

But what exactly did Lyons learn? He explained that too.

“How to arc it into Turn 3 better, how to hold the yellow line when running the bottom. Trying to keep his pace helped me figure out where our truck was off and what we needed to work on.”

Then, there was Brett Moffitt, who led 27 laps at Las Vegas, fresh off his Atlanta win.

“That’s fun racing with him (Kyle Busch) because he can drive,” Moffitt said. “Half of them can’t. It’s fun because I respect Kyle (Busch) a lot with everything he’s done. It’s fun to race door-to-door with him. People don’t like him coming and racing in the Truck Series, but I love it, because being able to run with him there and learn off him is really good for my career and helps me out, so it’s a lot of fun.”

But what about the argument that Busch could serve as owner in the series without actually taking a starting spot from someone who might have made the field otherwise? I have an answer for that one too. Sometimes, the best way to improve your equipment and your team’s setups is to put one of the best of the best behind the wheel.

In fact, as long as NASCAR allows Cup drivers to run in the lower series, Busch will always make a handful of starts with his team.

“It’s my own team and I’d like to always get out there and have the opportunity to race with my own team,” Busch said Friday during his media availability at Las Vegas Motor Speedway. “Everybody thinks I just like to go out there and pad my stats and everything else. It’s not like that. It’s entirely to work with the people and try to educate the people.

“I feel like every year we go into the season with new guys and I’m kind of regurgitating the same information sometimes. You have great leadership with the crew chiefs and stuff, but this is (Mike) Hillman’s (Jr.) first full season with us. Last year was Marcus (Richmond)’s first full season with us, so you know it’s hard for Rudy (Fugle) to be able to catch those guys up on exactly everything.

“So when I’m there with the team meetings and stuff like that, we always go over stuff to make sure that we’re a professional organization and we do our job and we hit all of our Ps and Qs and Is and Ts and everything else to make sure that we’re going out there and doing a really good job as if it was a Cup team. That’s what the professionalism of our team is trying to be.”

The point is that whether you like Busch racing in the series or not, his contributions are undeniable. He’s snagged incredible talent from the lower ranks and helped groom them to be a part of NASCAR’s future for many years to come. Sure, he didn’t give these drivers their talent, but he and the people he’s got in place at KBM recognize that talent and lock it down before another team does. And that’s something that I hope never changes in the series.

What a refreshing column, Beth! I never thought any FS writer would ever admit to Kyle’s contributions to the sport. And in addition to providing rides for young drivers and using his own experience to help set the trucks up to win, don’t kid yourself about the financial impact he brings. Sponsors want Kyle in their trucks. They will pony up for the unknown kids, but only if they get a piece of Kyle as well. The whole business model of NASCAR is in danger of falling apart because of sponsor defection. Yet Kyle keeps the sponsors interested in both his KBM rides and his NXS rides for JGR. Joe Gibbs knows how important Kyle is to his organization. He may have been a “project” for Gibbs at one time, but it seems he’s Joe’s favorite now. It’s time the NASCAR PTB also recognized it. And the fans? Well, haters gotta hate, but Kyle has one of the biggest fan bases in the sport to match up against the detractors. Not everybody is a fan of the well-mannered but boring vanilla beans at HMS.

I hate to admit it but i think kyle bushe is one of the best drivers to ever sit in a seat. That is the reason he gets by with all the attitude. Also its not bragging if its fact. And im a joey lagono fan so no bias here.

“But the problem with this argument is that Busch has given plenty of other racers opportunities.”

If he believed that he wouldn’t get in the truck. When he said he’s not trying to pad his stats why did he say he wants 200 TOTAL wins?

Oh, he wants 200 wins all right. But there is the sponsorship issue as well. Every time NASCAR has limited the times Kyle can race at the lower level, he has had to re-negotiate sponsorship. The costs of ownership eventually pushed Brad out of the Truck Series. Now KBM and a very short list of owners are keeping it alive. The sponsors want Kyle to drive their truck; they tolerate the kids if they can also get Kyle for a few races.

Kyle has done a ton for young drivers in the Truck Series. With the limits now in place, I have no problem with Rowdy wheeling a few races a year if it keeps sponsors happy and supporting the other young drivers on the team. The laundry list of talent that has come through KBM over the years is impressive.

Actually you could go down to the super late models as Kyle has fielded and raced a couple cars a year for a long time. I have watched him several times sign autographs at short track events till they actually have to go race.

Does he sign them because he wants to or because he has to? Every major short track event has autograph sessions.