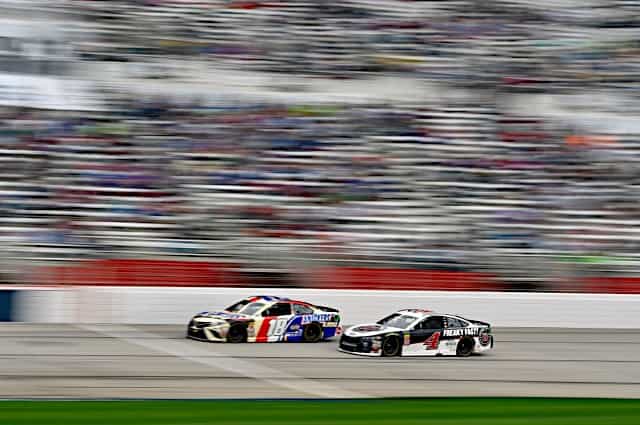 With Kevin Harvick’s win Sunday in Las Vegas, his career total of NASCAR wins reached a milestone mark of 100 wins. As a result, the graphs touting the win total along with Kyle Busch at 184, compared to Richard Petty’s 200 Cup Series wins and David Pearson’s 105 wins started appearing. Whenever the total “NASCAR” win total is used to equate success on par with Petty or Pearson, it becomes beyond irritating, and bordering on clickbait. Unless the main theme of the piece is that in no way should these absurd claims be made, likening a win total that combines lesser junior series comprised mainly of underfunded teams with inexperienced drivers, then don’t bother posting it.

Let’s take a look at Harvick’s NASCAR Cup Series career in its totality. 100 wins; 40 in the Cup Series, a championship in 2014, and victories in the Daytona 500, Coca-Cola 600, Brickyard 400 and Southern 500. That is a stellar career and first ballot Hall of Famer criteria and then some. Kyle Busch? 43 wins, a title in 2015 (albeit running half the season), no Daytona 500 triumphs, but he does have a Brickyard 400 win. For a guy that is 32 years old and just hitting his prime, there’s no way to tell how much more upside he has and what kind of damage he can do in the next 10 years. Can he eclipse Jeff Gordon’s 93-win total? I for one think he can.

All of which begs the question – why dilute these careers that are in motion by bringing in lesser series into the discussion that aren’t on the same plane as the two drivers (three if you thrown Gordon in the discussion) that are the benchmark for greatness?

How many times over the years have people rolled their eyes every time Kyle Busch wins a Truck Series or XFINITY Series race, particularly in the dark days of the 2009-2011 seasons of decimated fields and half-funded efforts? Harvick’s Busch Series Championship in 2006 was during a time when a good portion of the field were Cup regulars or Cup teams with Cup pit crews and technology – at the peak of the sport’s success. It was an accomplishment for sure, but on the same level of beating Jimmie Johnson and Jeff Gordon with essentially their own equipment when SHR fielded HMS powered and engineering supported Chevrolets?

When comparing stats, let’s try to keep things apples to apples and not lump in wins against the feeder series when you’re judging accomplishments against racing royalty.

Speaking of Harvick, the hammer came down rather harshly on the No. 4 team Wednesday, when fines were announced following his second consecutive win Sunday. While Reddit, Facebook, and Twitter were awash in angles of images of the Jimmy John’s Ford roof collapsing at the end of the straightaways, it was as if everyone had their own Zapruder film they were dissecting. While Rodney Childers did his best to soft-sell the obvious for a couple of days, the verdict was issued: loss of 20 driver and owner points, and car chief Robert Smith (not The Cure lead vocalist) suspended for two races. Many commenting on the car felt the penalties didn’t go far enough. First a missing lug nut in Atlanta, now this super-collapsible bendy roof and glass deal?

With fists clenched in defiance and filled with inconsolable rage, they were heard to shout, “…it’s not fair!”

This is a perfect example of, you can’t have it both ways. When you map out every square inch of the car, tightening the area the teams have to work in, you’re going to see weird stuff like this going on. While it might come as a complete surprise to some, it’s not just Chad Knaus that is out there trying to bend the rules and exploit every area possible to build the best racecar that they can. If you’re going to ask for all the cars to be measured by lasers, 10 templates and an aerial camera, the best minds will figure out a way to make it fit those parameters when it matters, but not necessarily at speed. The “Twisted Sister” Gen 4 cars may not have been symmetrical, but the engineering, art and science of the bodies that the fabricators worked their magic on was a sight to behold. Harvick’s roof dent is the modern day equivalent of bird shot falling out of the frame rails of cars pulling off pit road at Martinsville, or a backstretch at Darlington littered with discarded starter motors, designed to fall off to lose some weight after the race had started.

If anyone has the right perspective on this particular infraction, it’s Ron Burgundy. “I’m not even mad; I’m impressed!”

While Jimmie Johnson was getting lapped before the first stage was up last week (along with virtually half the field), it was beating another dead horse of “What’s wrong with Hendrick?” Frankly, very little is wrong with HMS. It’s a matter of priority, and addressing when needs to be the focus for the time being. Does anyone really think the No. 48 team can’t reel off “a” win in the next six months? The playoff format of win and in helps serve teams in a number of ways, not just those who can only win on restrictor plate tracks or road courses.

The number one priority right now at HMS, is to get Chase Elliott a win. He cannot go another year without winning, after having lost at least five wins in the past two years. Next up on the checklist is getting William Byron and Alex Bowman up to speed. Bowman was impressive in his substitute role for Dale Earnhardt, Jr. in 2016, but a new car and a teammate who has three Cup Series starts to his name has a bit of a challenge himself with his team this year. Speaking of Byron, don’t let the number change confuse you – that is not the Alan Gustafson No. 24 from last year – that is the much-maligned No. 5 team that Kasey Kahne struggled with for the past two seasons.

In short, fear not, 48 fans. Jimmie and Chad will have things squared away before Charlotte. He seems to do okay at Martinsville – would be a fitting place for their first win this season.

Interesting that the #4 passed prerace as well as postrace inspection yet during the race something was “amiss”. Obviously it wasn’t accidental.
But that’s just another day in the wacky world of nascar.

I think most fans agree that Kyle Busch reaching ‘200 wins’ is in NO WAY comparable to The Kings’. However, I’m sure Kyle will think differently.

Vito, I see your point about total wins. But consider some things. Richard Petty raced in an era where there were far more Cup races one could win in a season, and he also didn’t face anywhere near the level of competition that drivers face today. Back then there were maybe five or six drivers that won in a given week. Today that number is closer to 15-20.

Is it unfair to make the comparison of Kyle Busch’s total wins to Petty’s 200 Cup wins? Of course…but it works both ways. There’s no way anyone will win 200 races in the Cup series today. As dominant as Petty was in his era, he would not dominate like that today.

And I say that someone who was grateful to Jeff Gordon for stopping Dale Earnhardt from winning eight championships and passing my childhood racing hero.