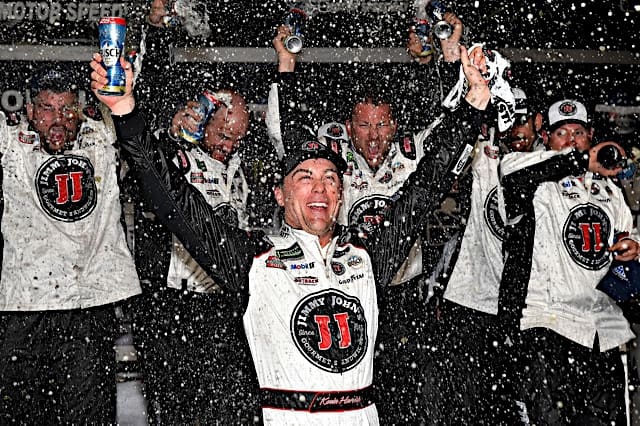 From TV to Twitter, everyone is talking about the “west coast swing.” It started in 2015, and is a three week period where the Monster Energy NASCAR Cup Series goes to Las Vegas, Phoenix and Fontana. This was made to give teams an option to stay out on the west coast instead of going back and forth from Charlotte. In years past, NASCAR would start out by going to Las Vegas and Phoenix, go all the way back to Bristol, then back out to Fontana. After much discussion with the race teams, NASCAR decided to change it in 2015.

Las Vegas Motor Speedway, ISM Raceway (formerly Phoenix International Raceway), and Auto Club Speedway are all different in their own way. Vegas, a fast track with lots of grip, can be a good indicator on how each team will run in the future mile-and-a-half races. Phoenix is especially important because the MENCS returns to that track in the last race before the Championship 4 at Homestead-Miami Speedway. Lastly, Fontana is a two-mile track that has transformed into some of the best racing on the circuit. The track surface is old and takes a toll on tires as the original asphalt still remains from its opening in 1997.

With all three of these tracks presenting many challenges for teams and drivers, is the west coast swing a good indicator of how well they may succeed for the rest of the season?

Las Vegas was won by Kevin Harvick, sounds familiar right? Harvick went back the next race at Phoenix and won again. Fontana was won by Brad Keselowski, as Harvick finished second. With a first, first and a second, Harvick earned the most points during these three races. He ended the year finishing second in points to Kyle Busch, who did not participate in these three races because of the injury he suffered at Daytona in the XFINITY Series race.

2016’s West Coast Swing started off by Keselowski winning at Las Vegas followed by his teammate Joey Logano in second. Harvick went back-to-back in the spring races at Phoenix as he won the following week. Fontana went to Jimmie Johnson, in a wild race as Harvick dominated, leading 142 of the scheduled 200 laps. The race went into overtime because of a Busch blown tire with three laps to go as Harvick was leading. Johnson, restarting third, passed Harvick coming to the white flag and held him off for the victory. For the second straight year, Harvick earned the most points during the West Coast swing but failed to capitalize during the MENCS playoffs, finishing eighth to eventual champion Johnson, who during the three race span, had finishes of third, 11th and first.

Last years West Coast swing was won by three different drivers. At Vegas, Martin Truex, Jr. led 150 of the 267 laps and held off Kyle Larson for the win. The craziest of the 2017 races out west was Phoenix. It started with six laps to go when a blown tire from Logano caused the caution, as Busch had a three-second lead over the rest of the field. During the caution, all the leaders went to pit road and took tires but Ryan Newman, Ricky Stenhouse Jr. and Truex. As they went back to green during the overtime finish, Larson was the first one on new tires, but didn’t have enough time to catch Newman, coming home second. Newman who broke a 127-race winless streak, dating back to the 2013 Brickyard 400. Larson finally broke that runner up streak as he went on to win the final race out west at Fontana. Larson led 110 of the 200-lap race, Keselowski finished second. Larson earned the most points during this period with finishes of second, second and first, but struggled in the playoffs, finishing eighth. Truex won the 2017 championship and finished first, 11th and fourth.

Can the West Coast swing predict the future of the 2018 season?

Kevin Harvick won last week at Las Vegas and looks to claim another one at Phoenix this week. Will the results be similar to his 2015 season out west and can it capitalize into something much more? Time will tell.

Not a fan of Harvick’s but MTJ should be compared to Harvick, not the other way around…and for records sake….MARTY has a lot of catching up to many…including KEVIN!. PPFFFFTTTTT.