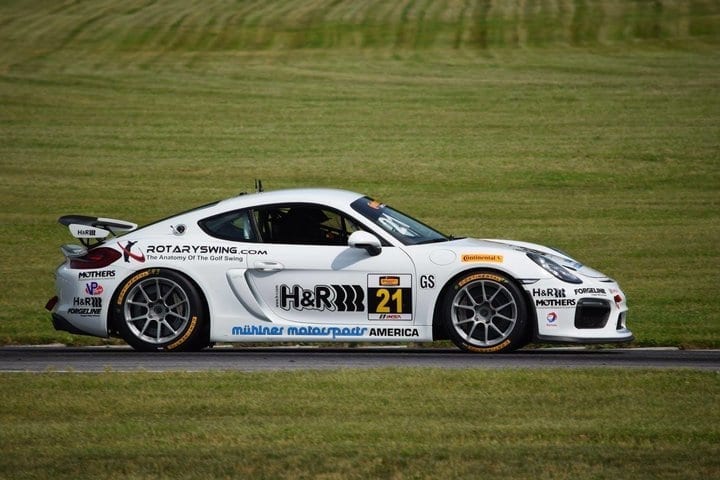 Mühlner Motorsports America’s Gabriele Piana was fastest overall in the two GTS practice sessions Friday in St. Petersburg, Fla.  Piana’s lap of 79.099 seconds (81.923 mph) in the afternoon session was the fastest GTS lap of the day.

Prior to the race weekend, a number of class shifts were made.  When the entry list was released, the class split was 10 GTS cars and 18 GTSA cars.  Now, it is 12 and 16.  Allegretta and Orey Fidani were shifted to the pro division in the past week.

In the morning session, Piana put his Porsche Cayman GT4 Clubsport MR at the top of the chart with a lap of 79.298 seconds (81.717 mph).  This came despite a period of time during the session that the car was “missing” according to timing and scoring.

Piana’s lap was nearly three-eighths of a second faster than PF Racing’s Jade Buford.  James Sofronas was third in the No. 14 Audi, followed by defending champion Lawson Aschenbach.  Vinnie Allegretta was fifth quickest.

In the afternoon session, Piana was once again fastest overall with his lap of 79.099 seconds.  That lap was more than a quarter of a second faster than Buford.  Aschenbach was third quickest, followed by Sofronas and Allegretta.

In GTSA, Ian Lacy Racing’s Drew Staveley was quickest with a lap of 80.038 seconds (80.962 mph).  Staveley’s lap was good enough for fourth overall.  This performance could put Staveley in line for a mid-weekend class change.  Something similar occurred last year at Utah Motorsports Campus after turning in laps near the top of the charts.

Staveley’s lap was nine-tenths of a second faster than Grahovec in second.  GMG Racing’s George Kurtz was third in the Crowdstrike Audi, followed by Hedlund.  Mark Klenin rounded out the top five.

GTS and GTSA teams are scheduled to qualify Saturday morning at 9:40 a.m.  Race No. 1 is scheduled for 5:05 p.m. and will be livestreamed at World-Challenge.com.