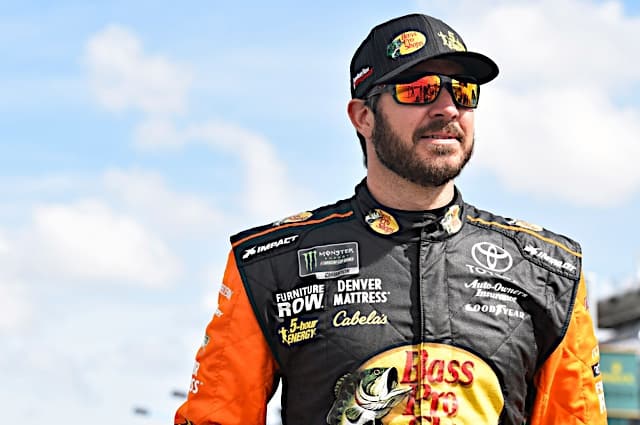 Martin Truex Jr. captured his 16th career Monster Energy NASCAR Cup Series pole on Friday (March 9) for Sunday’s TicketGuardian 500. The pole position is his first since Kansas last October. In that race, he went on to earn his seventh of his eight victories last season.

“We worked really hard coming here, knowing what we’ve done here in the past,” Truex said. “We’ve run well, but we never could quite get it just right to go for the pole. I think we were fifth here last fall. We had a good game plan coming here and I had to adjust my driving a little bit and then adjusted the way they set the car up and it all played into our hands. Just really proud of everybody on this 5-hour ENERGY/Bass Pro Toyota and definitely a good starting spot.”

Truex turned a lap of 136.945 mph to secure the pole ahead of second place Kyle Larson.

“I’m a little disappointed in second because I always qualify good here,” Larson said. “I think I’ve been like in the top eight every single time I’ve qualified at Phoenix and still don’t have a pole yet. I thought today was going to be the day. I thought my first lap was okay, but Martin (Truex Jr.) obviously, their team hit it there for that final round. Sunday’s race will be fun. We’ve been fast here the last few years, so it would be nice to close out the weekend with a win.”

Alex Bowman, who qualified fourth, almost duplicated his performance from 2016 after having front-running speed in both sessions. His Hendrick Motorsports teammate Chase Elliott qualified third while Joey Logano qualified fifth.

Denny Hamlin will start sixth, followed by Kyle Busch and Jamie McMurray. Erik Jones and Kevin Harvick round out the top 10. William Byron and Ryan Blaney were the final drivers to qualify in the final round.

Defending race winner Ryan Newman just missed moving onto the final round and will start Sunday’s race from 13th. Jimmie Johnson showed speed and topped the first round. He’ll start the race in 17th.

The session was only slowed once for an accident in the first round involving Jeffrey Earnhardt. Earnhardt will start the race in 37th on Sunday.

Since only 37 drivers were entered, no one failed to make the race.

There will be two practice sessions Saturday at 12:05 p.m. ET and 2:30 p.m. ET. Both of those will be televised on Fox Sports 1. Coverage of the TicketGuardian 500 begins at 3:30 p.m. ET this Sunday (March 11) on FOX. The race will also be broadcast live on the Motor Racing Network and on SiriusXM NASCAR Channel 90.

Chase Elliott qualified 3rd and Bowman 4th. Is it too much to expect accuracy in reporting?