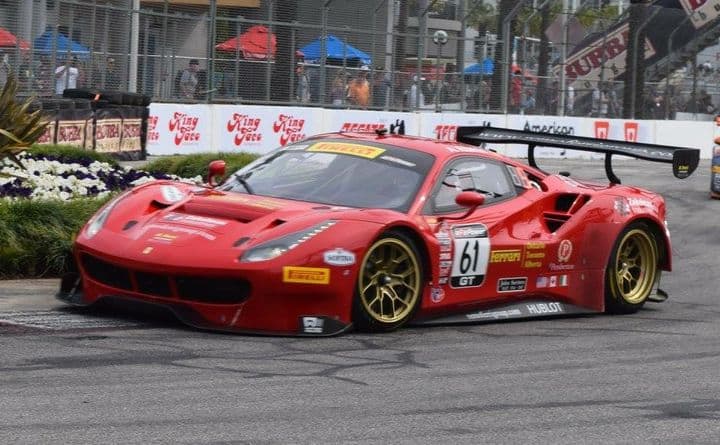 In the morning session, Vilander was fastest of all in his Ferrari 488 GT3 with a lap of 72.086 seconds (89.893 mph).  That lap was a little more than two-tenths of a second faster than Pfaff Motorsports’ Scott Hargrove in the No. 96 Castrol Porsche.  The debutante Canadian squad showed significant pace out of the box on Friday.

In GTA, TruSpeed AutoSport’s Parker Chase was fastest in the sole Audi entered.  Chase’s lap of 73.759 seconds (87.854 mph) was good enough for ninth overall.  His time was more than a quarter of a second faster than K-PAX Racing’s Rodrigo Baptista.

In the afternoon session, Vilander, Keilwitz and Hargrove each alternated quick times in the session.  With less than three minutes to go, Vilander set the aforementioned 71.601 second lap that topped the day.

Vilander’s lap was just a couple of hundredths of a second quicker than Hargrove, who will be making his Pirelli World Challenge debut on Saturday.  Keilwitz was third quickest, just over a tenth of a second off of Vilander.  Christensen and TR3 Racing’s Daniel Mancinelli rounded out the top five.

In GTA, Baptista turned a lap of 72.584 seconds (89.276 mph) to top the sub-class.  The lap was actually more than two-tenths of a second faster than the best his more experienced teammate (and past St. Petersburg race winner) Àlvaro Parente could muster.  In the sub-class, Baptista’s time was nearly six-tenths of a second faster than Squadra Corsa Garage Italia’s Martin Fuentes.

Pirelli World Challenge GT and GTA teams will take to St. Petersburg’s 1.8-mile street course at 9:15 a.m. Saturday morning for Race No. 1 qualifying.  The race is scheduled for 3:50 p.m. Saturday.  The race will be livestreamed at World-Challenge.com.