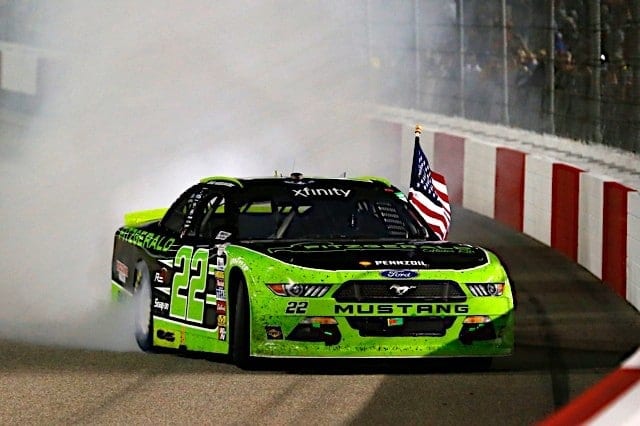 Keselowski’s pit crew got him the lead from Christopher Bell on the final pit stop of the day, and the No. 22 led the rest of the way. The win marks Keselowski’s second win in Phoenix.

“It was a good car,” Keselowski told FS1. “I feel like the car was better than me today.”

Keselowski said in Victory Lane that most of the No. 22 team is new this year, as many crew members moved up to the Monster Energy NASCAR Cup Series to work on Team Penske’s new No. 12 car.

“Now there’s a new class, and it’s good to see them get some success,” Keselowski said.

Bell finished in fourth place after he was passed late by Justin Allgaier and Kyle Busch.

“I don’t know if the track changed or if my car changed,” Bell told FS1. “I’m really bummed we didn’t get a better finish.”

Allgaier’s runner-up effort made him the highest-finishing NXS regular. It is the third time in NXS history that Allgaier finished 1-2 with Keselowski.

Allgaier, last year’s spring Phoenix winner, won the pole award and led the field to green, and Keselowski grabbed the lead from him on lap 11.

A caution for David Starr‘s blown engine grouped the field back up for a restart with 12 to go in stage one. Keselowski chose the high line for the restart and lost the lead to Allgaier when the 2010 NXS champion wiggled in Turn 1.

Keselowski caught back up to Allgaier a few laps later and went underneath of him, but Keselowski’s car got loose and slid up into Allgaier. Keselowski fell back to finish stage one in third, while Allgaier cruised to the stage win.

The race was halted after the first stage when rain brought out the red flag. The race was delayed for one hour and 34 minutes.

When the red flag was lifted, Keselowski beat Allgaier out of the pits but had to go to the tail of the field after receiving a speeding penalty.

Busch took the lead from Reddick, who inherited the lead by staying out, shortly after the start of stage two. Allgaier worked his way back into second but was not catching Busch as the second stage came to a close.

Matt Mills hit the wall with seven laps left in the stage to bring out the caution, and that is when the rain started back up again.

Allgaier, Christopher Bell, Keselowski and a few others pitted under the caution, but Busch and 11 other cars stayed out. The red flag flew again with just two laps left in stage two. The move prevented it from being called an official race.

After a 25-minute red flag, the race restarted with a one-lap shootout to end stage two. Busch gapped Hemric to win the stage, while Hemric was the highest-finishing NXS regular in second. Allgaier went from 13th to seventh in the one lap to salvage a few stage points.

Busch gave up the lead when everyone who did not pit on the prior caution had to pit. Allgaier took the lead for the third time, as he and 13 other cars stayed out.

Allgaier took off on the restart, but Keselowski stayed on his heels for much of the next 40 laps. With 58 laps to go, Keselowski finally maneuvered around Allgaier.

“We just needed that extra little bit there at the end,” Allgaier told FS1.

Bell gradually tracked Keselowski and Allgaier down as they battled through lapped traffic. Bell overtook Keselowski for the lead with 36 laps to go.

Four laps later, the leaders pitted under green flag conditions for the final stop of the day. The No. 22 crew got Keselowski out ahead of Bell by a nose. The two raced side-by-side around the track during their get-up-to-speed lap, with Bell on the preferred inside line. Keselowski held Bell off and set sail for the checkered flag.

“Justin Allgaier, quite honestly, outdrove me for the most of the day,” Keselowski said. “But at the end, we connected it with a great pit stop, great pit work, good strategy and got out there on the brand new tires and just barely got by [Bell] there. I knew once we got by ourself the car would carry me a little bit.”

Next week, NXS heads to Auto Club Speedway for the Service King 300.

They probably will too. Unfortunately, they will continue to stink up the show in Xfinity and the trucks. Gotta pad the win numbers somehow with the easier pickings.

think maybe its more the Cup Lite teams than the drivers?