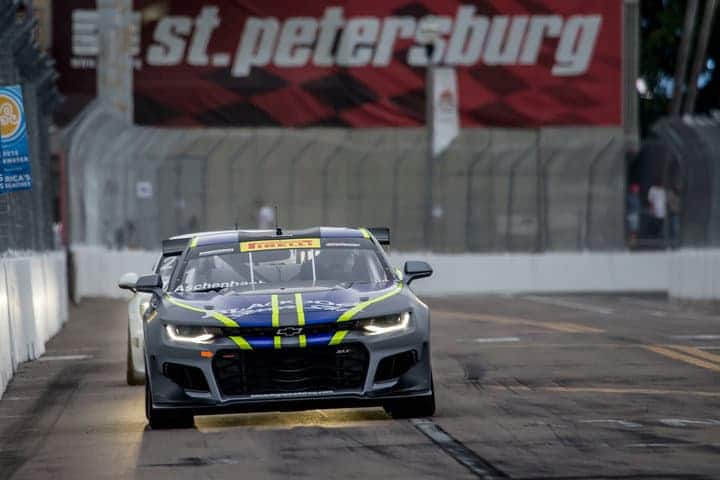 On Saturday (March 10), Blackdog Speed Shop’s Lawson Aschenbach passed pole sitter Gabriele Piana on lap 3 for the lead.  From there, Aschenbach was able to hold off Piana’s Porsche to win the first Pirelli World Challenge GTS race of 2018.

Even though Aschenbach led nearly the entire race, the race was not easy by any means.

“If I could make that move early and make that lead, I was hoping I could hang on to it at the end but Gabriele (Piana) kept me honest and he did a great job in the Porsche,” Aschenbach said in the post-race press conference.

Aschenbach and Piana were essentially in a race of their own.  Early on, their primary competition was GMG Racing’s James Sofronas and PF Racing’s Jade Buford.  Those two drivers had their own fierce battle for third that ended in tears when the two collided in turn 1.  Both drivers dropped all the way to the rear.  Sofronas was able to continue, but Buford suffered broken suspension parts in the crash.

There was only one full course caution in the race.  That was thrown when Frank Gannett spun and hit the wall exiting turn 3 in his Ginetta.

Once the green came back out, Aschenbach and Piana simply drove away from the field, opening up 20 seconds on third place as they settled the victory by themselves.  While Piana breathed in Aschenbach’s exhaust for the whole race, he simply could not put a move on Aschenbach for the win.

“The Camaro is very powerful; but the car doesn’t drive itself, and Lawson took the chance when he had it, so I tip my hat to him,” Piana said after the race.  “Having said that, I really tried everything. I had a lot of fun driving and I was really pushing hard.”

M1 GT Racing’s Jason Bell was third in GTS in his Audi, followed by Sofronas.  Sofronas had to charge all the way from the 20s back into the top five overall after his spin.  74 Ranch Racing’s Shane Lewis was fifth.

In GTSA, Ian Lacy Racing’s Drew Staveley was able to take the subclass lead from GMG Racing’s George Kurtz early in the race.  When Buford and Sofronas collided, that moved Staveley up to fourth overall.  A couple of laps later, Staveley passed PF Racing’s Vinnie Allegretta to move onto the overall podium.

For a good chunk of the race, Kurtz gave chase.  After the restart following the Gannett crash, Staveley slowly but surely pulled away from the defending GTSA champion.

Kurtz had second-place in GTSA locked up, but he cut a left rear tire and pulled off with a couple of laps to go.  That gave Staveley an 18-second lead, so he backed off and sauntered to the class victory, finishing third overall.

GTS/GTSA Race No. 2 from St. Petersburg is scheduled for 9:30 a.m.  The grid for that race was determined by the fastest lap times in Race No. 1.  As a result, Aschenbach will start Race No. 2 from the pole.  The race can be seen at World-Challenge.com.