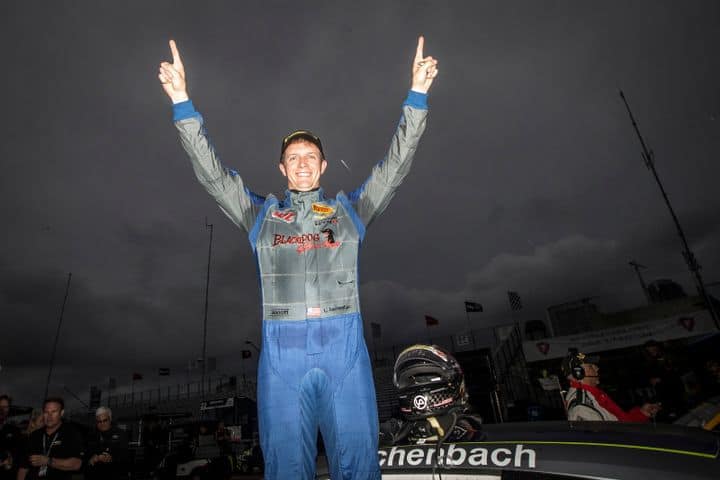 “The [Chevrolet] Camaro GT4.R was on rails today,” Aschenbach said after the race.  “Fortunately, they were battling behind me, so I had a little breathing room [at times].  They kept me honest out there.  Really happy with the double win and hope to keep the momentum going to COTA.”

Both drivers were ok and walked away.  The crash did not block the track, but the cleanup from the crash could not be completed before time would have expired.  As a result, the checkered flag was displayed early.

Piana finished in a hard-fought second for the second day in a row.  GMG Racing’s James Sofronas was right behind them in third.  Team Panoz Racing’s Ian James was fourth, while PF Racing’s Jade Buford was fifth.

In GTSA, the race ended up being a back-and-forth affair between Ian Lacy Racing’s Drew Staveley and Fast Track Racing/Classic BMW’s Toby Grahovec.  Staveley led from the class pole early on, but Grahovec was able to get past.

As the race wound on, Grahovec and Staveley were in a pack with a number of pro drivers.  With less than 10 minutes to go, the pack approached the slower Ginetta of Burns.  It appeared that Grahovec was held up by Burns.  That allowed Staveley to re-take the class lead.  Less than a lap later, Burns spun and collected Allegretta, creating the aforementioned crash that ended the race.

For Staveley, the early checkered flag gave him his second win of the weekend.  Grahovec had to settle for second, while Blackdog Speed Shop owner/driver Tony Gaples was third.  Flying Lizard Motorsports’ Mike Hedlund and JCR Motorsports’ Jeff Courtney rounded out the top five.

Pirelli World Challenge’s GTS and GTSA classes will be back in action for the first standalone GTS SprintX races Circuit of the Americas in less than two weeks.  Practice is due to start on Friday, March 23 with races on Saturday and Sunday.