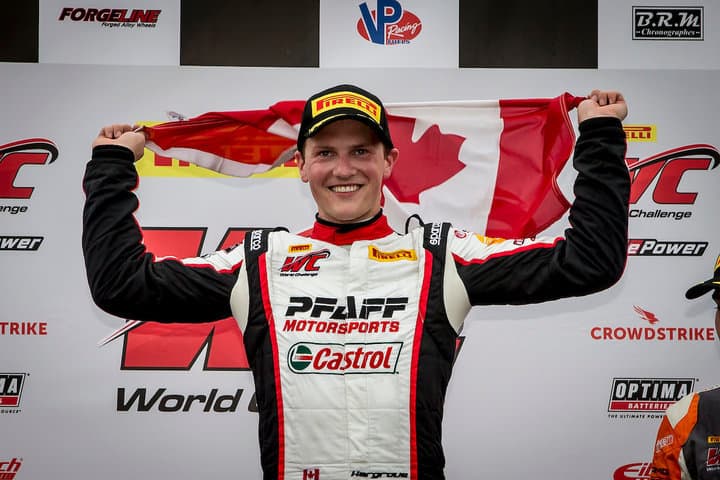 Scott Hargrove may not have had a perfect introduction to Pirelli World Challenge, but he gets to fly home to Canada with everything that matters.  Hargrove led flag-to-flag Sunday afternoon to win Race No. 2 of the Grand Prix of St. Petersburg for the GT and GTA classes.  That gives the rookie driver a weekend sweep.

From the start, Hargrove pulled out to the lead over Daniel Morad.  However, Callaway Competition USA’s Daniel Keilwitz was able to take advantage of a mistake by Morad to move up to second.

The remainder of the race was a start-and-stop affair.  First, R. Ferri Motorsport’s Toni Vilander clipped the inside wall in turn 3, then shot into the outside wall.  Vilander was ok, but his Ferrari was done for the day.

Shortly after the restart, Spencer Pumpelly went through the same turn a little bit too fast and hit the outside wall.  Another yellow was thrown due to the fact that he left his rear wing behind.

After Pumpelly’s wreck, Keilwitz put substantial pressure on Hargrove for the lead.  At one point, Keilwitz was able to get to Hargrove’s inside on the run to turn 4.  Ultimately, Keilwitz had to jam on the brakes and could not make the move work.

Any chance Keilwitz had at snatching victory ended when K-PAX Racing’s Àlvaro Parente had the biggest crash of the weekend.  Parente’s No. 9 Bentley suffered some kind of mechanical failure that prevented the 2016 GT champion from braking.  As a result, Parente flew off the road and smashed into the tires.  Parente walked away, but his car was thrashed.  The race was red-flagged with slighly more than 10 minutes remaining, then declared complete.

Unlike Saturday’s race, Hargrove had to work for his spoils Sunday.

“At the first restart, I had a good jump and I tried the exact same thing the second time but, of course, [Keilwitz] is smart and he figured out what I was going to do,” Hargrove explained after the race.  “So he got around me [briefly] and then it was a fight side-by-side a couple of times, both slipping and sliding.”

Keilwitz had to settle for second, followed by Morad.  Michael Christensen was fourth, while Parente was classified in fifth.

Pirelli World Challenge teams will take next weekend off before traveling to Texas for the start of the SprintX season.  Teams will pull in on Wednesday, March 21, then have a test day on Thursday prior to the actual race weekend.