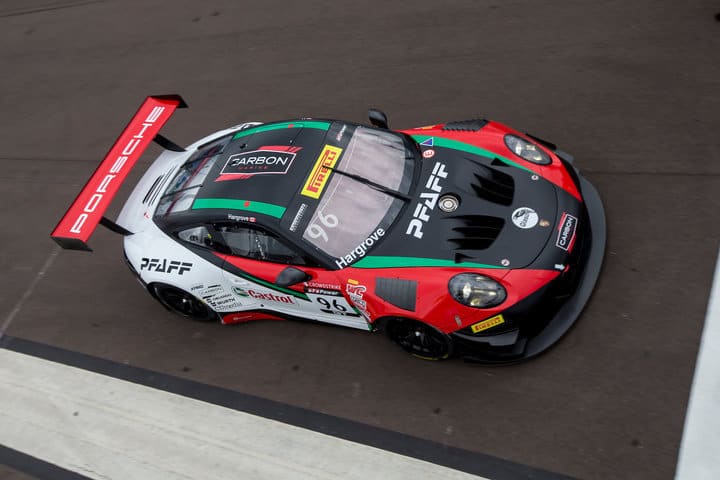 Pfaff Motorsports’ Scott Hargrove had to start Saturday’s Pirelli World Challenge GT/GTA race at St. Petersburg in the rear after hitting the wall in qualifying Friday.  However, he was able to dodge a crash at the very start of the race and put himself in position.  He was able to get past CRP Racing’s Daniel Morad and hold on to take his first career PWC victory in his first start.

Naturally, an instance like Friday would put a rookie driver down in the dumps.  He’s not there anymore.

“In qualifying, I clipped the wall just enough to collapse the front suspension.  But my mood has done a 360,” Hargrove said after the race.  “I’m thrilled with the win because the car is flawless.  I was able to put the laps down when I needed them and I’m pretty excited for [Sunday].”

R. Ferri Motorsport’s Toni Vilander started from the pole, but the race got off to an auspicious start.  St. Petersburg is known for opening lap wrecks and Saturday was no exception.  Callaway Competition USA’s Daniel Keilwitz made an ultra-aggressive move to the inside for the lead, but missed the turn.

Vilander got loose trying to defend Keilwitz’s move, allowing Morad to get to the inside of a four-wide situation.  Ultimately, Morad got the lead here, but K-PAX Racing’s Àlvaro Parente and TRG’s Spencer Pumpelly had contact.

Much of the rest of the event was a three-car race between Morad, Vilander and Hargrove.  Hargrove haunted Morad for much of the event before taking the lead on the 18th of what turned out to be a 34-lap race.  From there, he pulled away.

Hargrove’s margin of victory was 3.918 seconds over Vilander.  Morad was third, followed by Keilwitz and Michael Christensen.

In GTA, the first lap crash eliminated a threat to win in Chase.  In the aftermath of the crash, Squadra Corse Garage Italia’s Martin Fuentes was able to get past pole-sitter Rodrigo Baptista for the subclass lead before the full course yellow came out.  After the restart, Fuentes pulled away to take the victory by more than eight seconds over the former GTS racer.

In addition to claiming his first victory, Hargrove turned in the fastest lap of the race with a time of 72.059 seconds (89.926 mph).  As a result, Hargrove will start from the overall pole in Race No. 2.  Race No. 2 is scheduled for 3:15 p.m. Sunday afternoon after the conclusion of the Verizon IndyCar Series’ Firestone Grand Prix of St. Petersburg.  The race will be streamed live at World-Challenge.com.