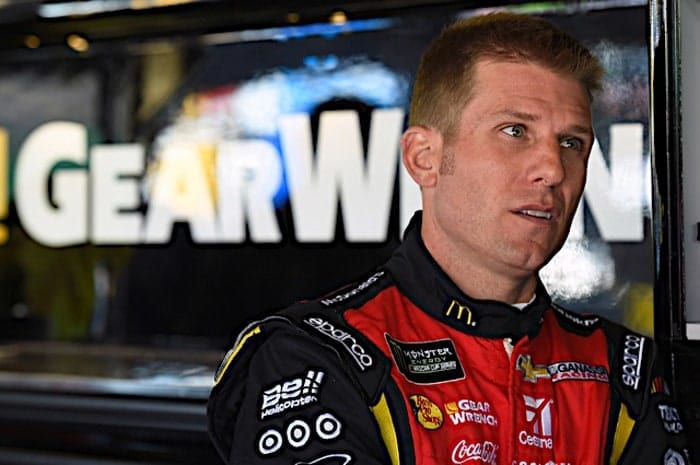 ONE: Harvick’s Not the Champ Just Yet

Four weeks into the new season and you’d be forgiven for thinking this is the Monster Energy NASCAR Harvick Cup, especially given dominance of the Stewart-Haas veteran who has won three straight following the season-opening Daytona 500. Making matters more concerning for the chasing pack, Kevin Harvick has won at two of the tracks in the playoffs (Las Vegas Motor Speedway and ISM Raceway) leading 433 of a possible 1,111 laps (a dominant 39 percent clip). In short, Harvick is eviscerating the field.

Is it all doom and gloom for the rest? Absolutely not. On the most basic of levels, the season is very long with plenty of races still to run and teams that are currently a little off will find speed.

“We’re playing a little bit of a catch-up game to see where we needed improvements to get our stuff going better,” said Kyle Busch of his start to the season and Harvick’s fine form. “It’s pretty good to know we’re a little bit off now, but we’re finishing second each week. Our cars were pretty evenly matched [at Phoenix].”

“At times, we were off a little. If you think about it, we’ve been getting those results, which is great. Everybody hasn’t really been home [given the West Coast swing], to work on their stuff, so there’s still a lot to do and a lot to see.”

Add to that more miles under the hood of the new Chevy Camaro in the coming weeks, which will certainly see the car become more competitive, so there’s every reason to think that Harvick can be caught. Most prognosticators would have had Harvick winning multiple races and making a deep run in the playoffs – likely all the way to the final four – prior to the season so I’m not sure three straight wins really changes much. Of course, if Harvick stretches this to four, five or even six straight wins maybe I’ll have to change my mind.

Sunday’s race at ISM Racing was a milestone for Jamie McMurray: his 550th straight Cup start. McMurray made his debut with six races to go in the 2002 Cup season at Talladega Superspeedway, finishing 26th, just as he did this weekend. The following week he won at Charlotte Motor Speedway, the first of his seven Cup victories, but it would be quite a wait until 2007 in the summer Daytona race before he notched a second win. In total, McMurray has made 763 starts in NASCAR’s top three series (550 Cup starts, 188 XFINITY and 25 Truck). This weekend, at ISM, he ran a rare double, finishing fifth in the XFINITY Series race and marking his first start in the second series since September 2013.

Only four active drivers have raced more than McMurray. Atop that list is Kurt Busch with 616 starts, closely followed by Harvick (614), Ryan Newman (588) and Jimmie Johnson (583). Running in his 17th season at the top level of stock car racing, McMurray is one of just three drivers to have won the Daytona 500 and the Brickyard 400 in the same season (2010) and one of just four drivers to have won both the Rolex 24 At Daytona in 2015 and the Daytona 500. The other three to have achieved that same feat are racing royalty – Mario Andretti, A.J. Foyt and Jeff Gordon.

McMurray has made the playoffs for three straight years finishing 13th in both 2015 and 2016 and 12th last season. But it has been a long time since his last win some 152 races ago at Talladega. McMurray more than anyone will want to snap that particular streak sooner rather than later.

Racing is a cruel mistress and no one knows that better this week than Robert Wickens. Making his debut in the Verizon IndyCar Series in the No. 6 Schmidt Peterson Motorsports Honda, the Canadian veteran of the German Touring Car Series, grabbed pole in a wild qualifying session, and dominated the race, leading 69 of the first 110 laps.

A caution came out with seven to go for Max Chilton’s spin and as Wickens led the field to green with four to go, a hungry Alexander Rossi was ready to pounce. The rookie nailed the start and looked to be headed to an epic maiden victory, but Chilton stalled as the leader was coming to the line with two to go bunched up the field again. This time, Wickens did not get away so smoothly and Rossi dived for the inside of Turn 1, slid up the track and spun the Canadian, allowing Sebastien Bourdais to sneak through for an emotional victory, his first since his terrible practice accident in the lead up to the 2017 Indy 500.

“I thought I gave him enough space that actually would have held P1,” said Wickens afterward. “I went very late on the brakes, and he tried to stay beside me, but the track is so dirty on the inside he couldn’t keep the line and just slid into me. I don’t know. Just super disappointed.”

Making matters just a little spicier, Wickens and Rossi are friends away from the track.

“Honestly, I knew it wasn’t going to be over until it was over, but I just hate how the day ended. I expect more from Alex. I thought we would have had a good fight.

FOUR: Next Up – Auto Club Speedway

Next up we head to Fontana and the two-mile, low-banked superspeedway. It will be the 29th Cup race at Auto Club Speedway, a streak that extends back to the inaugural event in 1997. Winning that day was Jeff Gordon, one of 10 victories he had that year en route to his second championship. For eight seasons (2004 through 2010), the track had two races, switching to one a season in 2011 due to attendance issues.

Johnson leads the way among active drivers with six wins with Kyle Busch trailing behind in second with three. Five other drivers have a solitary win: Kasey Kahne, Brad Keselowski, Harvick and Kyle Larson, who won the race in 2017, his second career Cup victory. But as the track surface has aged, the racing we’ve seen at ACS has typically been excellent, with cars able to run all over the track up to five wide in places.

One driver to watch this weekend might just be Clint Bowyer, who, like his fellow Stewart-Haas teammates, has made a solid start to 2018. This time last year, Bowyer finished third at Fontana and career-wise he runs well at the SoCal track. He is long overdue a win (189 races and counting). Maybe this weekend is when he finally gets it done.

It was an eventful last week for Matt DiBenedetto, who came home a creditable 25th on Sunday at ISM Raceway in his Go Fas Racing Ford. DiBenedetto started the week with an unusual request for sponsorship help on Twitter. It flooded in from the likes of Darrell Waltrip, Harvick and Denny Hamlin who got things started with a pair of tweets promoting DiBenedetto’s cause.

Because of @dennyhamlin starting a huge wave of support for us, it landed us @zyngapoker as a primary sponsor and gave us many more leads to work on for the rest of the season. A simple thank you will never express my gratitude https://t.co/MEiUCkfxKW

Here’s hoping this leads to funding throughout the season for DiBenedetto. He’s one of the good ones, that’s for sure.