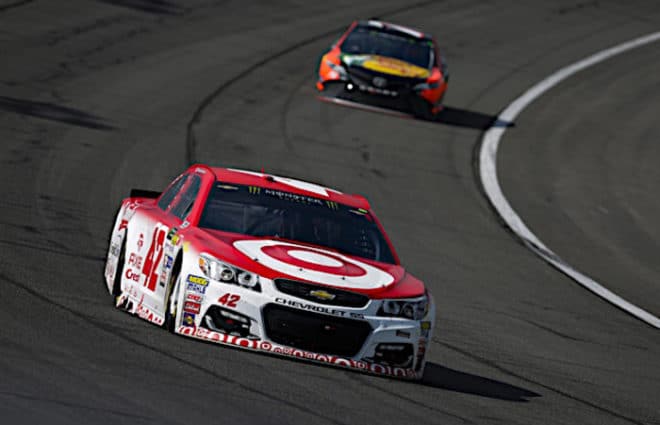 This weekend, the Monster Energy NASCAR Cup Series heads to the Auto Club Speedway in Fontana, California for the final race of the “West Coast Swing.” 37 cars make up this week’s entry list, meaning once again, everyone who shows up will qualify for the race.

The only addition is Premium Motorsports adding a second entry for the second time this season.  Veteran Reed Sorenson will be behind the wheel of the No. 55 entry for Premium as he makes his season-debut.  Joey Gase drove the same car to a 32nd place finish at Las Vegas Motor Speedway.

Ross Chastain will return to the No. 15 entry for Premium Motorsports as well for the second week in a row, after scoring a 27th-place finish this past weekend at the ISM raceway.

Cole Whitt will be back in the No. 72 entry for TriStar Motorsports.  As noted before the season began, Whitt and Corey LaJoie will share the ride in 2018.  This will be Whitt’s third start this year after scoring a pair of 28th-place finishes at the Atlanta Motor Speedway and Las Vegas Motor Speedway a few weeks ago.  LaJoie drove the car this past weekend, but unfortunately, had an engine let go only 23 laps into the race.

DJ Kennington is not on this week’s entry list after making his second start this year in the No. 96 for Gaunt Brothers Racing at ISM Raceway, earning a 31st-place finish.

Timmy Hill will return to the Rick Ware Racing No. 51 entry for the second straight week after finishing 33rd in this past weekend’s race.  This is the first time this season that the No. 51 has had the same driver in the car back-to-back weeks.

Brandon is a 22-year-old from NY and has been a passionate follower of motorsports for 14 years now. He recently graduated from Molloy College on Long Island with a BA in Communications. Working within NASCAR has been a dream for Brandon for a while, and he hopes to be able to live out the dream in the very near future.
Previous Entry List: 2018 California 300
Next 5 Points to Ponder: Vets, Rookies & the Power of Twitter

There was a surprising winner in victory lane on Sunday night (Sept. 27) following the …

Matt DiBenedetto flexed his muscles Sunday night (Sept. 29) in the South Point 400 at …