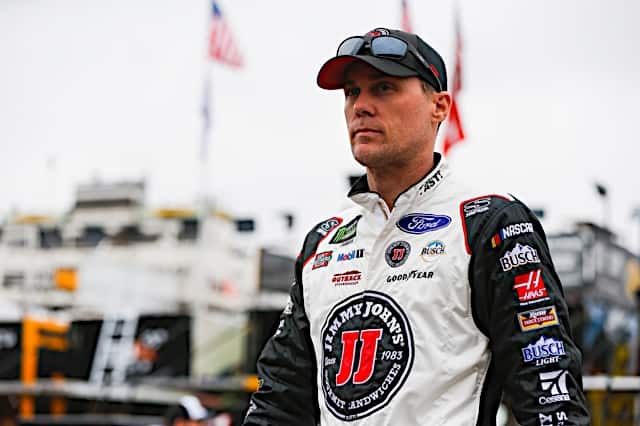 Monster Energy NASCAR Cup Series: Happy Harvick Makes 42 The New 21 – Kevin Harvick is making this young gun ad campaign for NASCAR look like a waste of time. Harvick laid waste to the field at Phoenix, besting Kyle Busch and Joe Gibbs Racing a second straight week. The competition was stiffer this time, but the No. 4 Ford fixed its Achilles’ Heel – pit road – en route to a track record ninth victory at the one-mile oval out in the desert.

His reward was a piece of NASCAR history. Harvick has won three straight Cup races for the first time in his career, spanning all the way back to 2001. He’s won three of the first four Cup races this season, a feat last accomplished by Bill Elliott in 1992. Now, he’ll look to earn four straight victories at Fontana next Sunday, a feat achieved just once in NASCAR’s postseason era (Jimmie Johnson in 2007).

But perhaps the biggest number is 40, Harvick’s MENCS career win total. At this rate, he’ll approach his age and then beat it in 2018 with a Ford Fusion that’s fused together at Stewart-Haas Racing better than anywhere else.

Could you imagine if Harvick stayed at Richard Childress Racing? His resume was good – not great. But now, with 17 wins in four-plus seasons at the No. 4 car, Harvick’s turned into a surefire Hall of Famer. He’s earned one career title (2014) with the team and he’s far from being done yet.

Chevy? What new Chevy? William Byron? Chase Elliott? Their ages combined total Harvick’s. But no one is a match for this SHR team more comfortable than ever with Ford in year two.

“Last year, we weren’t able to focus on anything for the first four months because everything was a problem,” Harvick said. “These guys at Stewart-Haas Racing have worked on Chevrolets for a long time, and that’s the only car that they knew. So learning the nuances of a different manufacturer and I think as you look at the second year for us….”

Harvick didn’t need to explain. He’s done his talking on the racetrack. Chevy, Toyota. They may have new cars, but the gritty, veteran experience of SHR, which put all four cars inside the top 10 for the first time Sunday, is putting Ford over the top. Like it or not, an old dog running circles around the field is the 2018 MENCS story that just won’t stop.

“I’m just fortunate to be riding the wave,” Harvick said. “You can call me old, you can call us old, but cars are fast and things are going well.

“There’s a lot of good teams, but I’d put our bunch up against anybody.” – Tom Bowles

XFINITY Series: Brad Keselowski Beats the Rain in the Desert – Out of the 33 races on the XFINITY schedule, the two at ISM Raceway should not be a threat for stoppage due to rain, as it sits in the middle of the desert. However, that was not the case in Saturday’s DC Solar 200.

The race was red flagged twice, for over two hours, both in the opening 88 laps. For more than 20 laps in the second stage, cars were slipping and sliding, but when a caution came out with Matt Mills making contact with the wall, NASCAR called the drivers to pit road, where they sat for over a half hour.

When the race was resumed, Justin Allgaier had the quickest car on the track, leading a race-high 76 laps. But with 58 laps to go Brad Keselowski caught the No. 7 machine, passing Allgaier with ease.

Before the final pit stop with 31 laps to go, Christopher Bell got around Keselowski for the lead, but the No. 22 crew had a quick stop and made an adjustment giving the 2012 Cup Series champion what he needed to score the victory. It’s Team Penske’s first XFINITY win of the season, and Keselowski has won two in a row, dating back to Richmond Raceway last September. – Dustin Albino

Sebastien Bourdais won on the West Coast of Florida for the second consecutive year. Once again, he ran on an alternate pit strategy and completed the final 34 laps on fuel. Meanwhile, Robert Wickens dominated a majority of the race but was taken out by Alexander Rossi in Turn 1 on a GWC attempt. Wickens finished 18th while Rossi came home third. Graham Rahal ended up second.

Will Power started on the outside of the front row but spun on the first lap. He backed his No. 12 Chevrolet into the wall and replaced his rear wing. He salvaged a 10th-place result.

Takuma Sato and Scott Dixon made contact on Lap 34. Dixon overdrove Turn 1 and hit Sato, although both drivers were able to finish the race. Dixon finished sixth and Sato 12th.

The IndyCar Series’ next stop is in one month at ISM Raceway in Phoenix. It will be the final event at the one-mile oval before the track undergoes a reconfiguration which will move the start/finish line to the straightaway currently between Turn 2 and the backstretch’s dogleg. – John Haverlin

Sports Cars: Àlvaro Parente Walks Away from Huge Crash – The 1.8-mile circuit in St. Petersburg, Fla. seems to be prone to having huge crashes, dating back to the earliest races there in the 1980s.  Sunday was no exception.  K-PAX Racing’s Àlvaro Parente had a huge crash in Turn 10.  It was plain to see that Parente lost the ability to stop his Bentley at the second fastest point on the course, and all he could do was simply brace himself for the almighty impact.

Even with a tire barrier in the runoff, it was a sudden stop for the Portuguese racer.  Parente was able to exit the car with assistance from a track worker, which was mainly necessary because his Bentley was propped at a 60-degree angle.

In the clip above, you can see Parente appear to be in some discomfort after exiting the car.  However, K-PAX Racing tweeted good news about his condition.

Team statement regarding incident in the second round of @WCRacing Sprint GT competition at @GPSTPETE: pic.twitter.com/mcMxHQojUq

Ultimately, Parente won’t have that much time to rest up after the crash.  The Pirelli World Challenge SprintX season starts in under two weeks at Circuit of the Americas in Texas. – Phil Allaway

Small correction: the Wickens/Rossi wreck was not on a “GWC attempt.” Indycar does not do that and will finish on a yellow flag if need be. It was on a restart with one lap to go.

I think the new car is awesome. The race was entertaining and very competitive. How much it will remain so as the crews and drivers become accustomed to the aero kit remains to be seen, but it certainly is a car that is more racy and has more equality between engines.

Correction, there were two laps to go, but the race was the regulation length. The officials threw a bit of a curveball at the drivers by deciding to restart with two laps to go in the middle of a pace lap, turning off the lights not at the beginning of the final yellow flag lap, but halfway through it due to their hasty decision to restart more quickly than normal.

Rossi was sloppy coming into the turn too hot and Wickens got screwed. More interesting and entertaining than Nascrap.