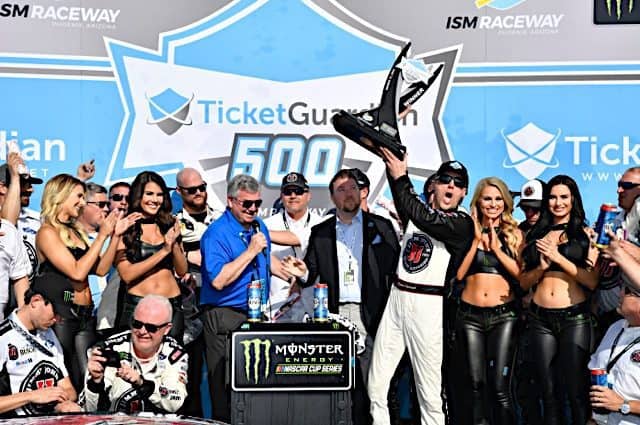 Stop us if you’ve heard this before: Kevin Harvick wins at Phoenix. For the ninth time in his career, Harvick was the first to take the checkered flag. The Bakersfield, Ca. native wins for the third time in a row this season. The Busch brothers, Kyle and Kurt, took the stage wins with Kyle grabbing stage one and Kurt securing the green and white checkered for stage two.

The first stage of the race was interrupted by a caution for Corey LaJoie blowing up. NASCAR designated that as the competition caution, as there was precipitation overnight. From there, the race went green to the end of the first stage with Kyle Busch scoring his first stage win of the season. Busch dominated much of the stage, but a late caution for Chris Buescher hitting the wall set up pit stops before a dash to the stage end. Kurt Busch was one of five drivers who stayed out instead of stopping, restarted on the outside of the front row and led the one lap to the stage finish.

Once the final stage began, Harvick worked his way to the front and took the lead for the first time in the event on lap 178. Ryan Newman and a couple other drivers attempted to stay out and hope for a caution in the final stage, but it never came. When Newman finally pitted with 23 laps to go, it was Harvick at the point who cruised to the win.

While Harvick has proven to be the dominant car on intermediate tracks to start the year, (and we all knew he’d be a force at Phoenix) it is the rest of the field that made the statement about their position in the sport. The Hendrick Motorsports cars of Chase Elliott and William Byron were both strong during the event. Kyle Busch and Denny Hamlin were both stout all day with Busch finishing second to Harvick for the second straight race. The season is lining up to be ultra competitive with all three manufacturers very close.

The television race officials were out in force last weekend when Harvick’s rear window was caving in under speed. The Twitterverse was abuzz with screen captures and pictures of the window collapsing and the obvious advantage that Harvick was gaining. It wasn’t anything sinister, just a broken brace. The greater issue was that the side skirt on Harvick’s car was not made from aluminum. Harvick’s car chief has been suspended for two races, his crew chief was fined $50,000 and the team lost 20 driver and owner points. The interesting aspect is that Harvick has a legal win. Is he better served by “pushing the gray area,” scoring wins that he loses the points for in the end because it prevents other drivers from accumulating those points?

2019 NASCAR Hall of Fame nominees were announced this week. New nominees included Harry Gant, Kirk Shelmerdine, John Holman, Ralph Moody and Jeff Gordon. The debate immediately began over who should make it into the Hall. The question needs to be raised again: is it time to reduce the number of people inducted each year or change the process to a percentage of voters? When debates are raging over drivers with less than 20 career wins, the standards have become pretty low.

I say it every year, but there still needs to be a revamping of the Hall of Fame process. The fact that all 22 members of the nominating committee also are on the voting committee is ludicrous. The two entities need to be completely separate so there is no bias during the voting process. If that is done, then Smokey Yunick might possibly get the realistic consideration he deserves.

Fans have a say in what song will play when their driver walks out for this Spring’s race at Bristol. For the fans who want to have a say in the song choice, they can go to the track website and select from three songs available for their favorite driver.

Matt DiBenedetto took to Twitter with his hand out this week to plead for assistance in getting sponsorship for the No. 32 Go FAS Racing entry for Phoenix. Harvick and Hamlin agreed to step up and help the situation which drove attention to DiBenedetto’s need. Multiple companies inquired and several may end up on the car before the end of the year. Interestingly, no one who was applauding the effort and decision of Zynga Poker to help out took the time to mention that a car with a charter is having to beg for sponsorship. The No. 32 was going to be in Phoenix whether they were sponsored or not but having someone on the hood is certainly helpful. It makes you wonder though, if this was the old days and 47 cars were coming to the track, would so many people be jumping on board to try and help out?

LaJoie is driving a limited schedule in 2018. His first race was the Daytona 500 and his second was this weekend at Phoenix. For the second race in a row, LaJoie’s engine expired early in the event. The power plant let go in Daytona on lap eight. Phoenix saw LaJoie turn 23 laps before his engine grenaded again. LaJoie knows that he’s paying his dues and earning his stripes, but it would be nice if he could complete a full race to gain a little more experience.

Paul Menard has started the year off with two top-10 runs and a 17th at Atlanta. Sunday he was running in the teens again but struggling with braking. Shortly after the conclusion of the second stage, Menard went into Turn 2 and blew his right rear tire on exit. His No. 21 pounded the outside wall tail first and his day ended in a 36th place finish.

Aric Almirola continued his strong start to the season in his new Stewart-Haas Racing ride. His seventh-place finish at Phoenix was his first single-digit run in the No. 10. Almirola is hoping to prove SHR right in its decision to put him in the car. With the success of Harvick so far this season, Almirola very well could become another SHR entry in Victory Lane.

Daniel Suarez was third in class among his Joe Gibbs Racing teammates, but he had his best run of the season with an eighth-place finish. The run at Phoenix was Suarez’s first lead lap finish of the season. He has one career top-five finish in the Cup series but he is poised for more as the JGR camp continues to fine-tune its entries in 2018.

That victory ties him with Mark Martin for 18th on the All-Time win list.

Harvick now has nine career wins at ISM Raceway, which is more than double what any other driver has at the track.

Harvick joins the other three drivers over 40 years of age that won three consecutive races in a single season. They are David Pearson, Bobby Allison and Harry Gant.

Kyle Busch finished second for the second race in a row and the second time in 2018.

Busch has come home in the top two four times in his career at ISM Raceway.

That ranks Busch in a tie for 14th on the All-Time list with Buddy Baker, Rusty Wallace and Terry Labonte.

Rounding out the top three was Chase Elliott.

Elliott scored his first top three of the season. He’s had finishes of third, fourth and sixth in three of the four races in 2018.

This is Elliott’s second consecutive top three at ISM raceway and the second of his career.

Elliott has finished on the podium 14 times in his career. That ranks him 90th on the All-Time list in a tie with Pete Hamilton, Ralph Moody and Eddie Pagan.

William Byron was the Rookie of the Race.

For the year Byron and Darrell Wallace Jr. have each won Rookie of the race twice.

Kevin Harvick scoring win No. 9 at Phoenix with a three-quarter second advantage over second place might not be an instant classic, but Sunday’s race was really close. The race saw a four-car, nose-to-tail battle for the lead, for over 20 laps. It saw a mix of strategies that almost saw last year’s winner pull off another win. The second stage ended with pit strategy giving a win to the stage winner. There was intense racing throughout the field and there was doubt until the final 10 laps. As a result, this one earns five ice cold Old Skool IPAs from Mother Bunch Brewing.

The west coast swing wraps up at California on Sunday, March 18. Coverage starts at 3:30 p.m. ET on FOX. You can also stream the action on the Fox Sports Go app. To listen to the race it is available on your local MRN affiliate, www.motorracingnetwork.com or SiriusXM NASCAR Channel 90.

What is it that Mike Neff doesn’t do? The writer, radio contributor and racetrack announcer coordinates the site’s local short track coverage, hitting up Saturday Night Specials across the country while tracking the sport’s future racing stars. The writer for our signature Cup post-race column, Thinkin’ Out Loud (Mondays) also sits down with Cup crew chiefs to talk shop every Friday with Tech Talk. Mike announces several shows each year for the Good Guys Rod and Custom Association. He also pops up everywhere from PRN Pit Reporters and the Press Box with Alan Smothers to SIRIUS XM Radio. He has announced at tracks all over the Southeast, starting at Millbridge Speedway. He's also announced at East Lincoln Speedway, Concord Speedway, Tri-County Speedway, Caraway Speedway, and Charlotte Motor Speedway.
@MNeffShortTrack
Previous Lawson Aschenbach Wraps Up PWC GTS Sweep in St. Petersburg
Next The Big 6: Questions Answered After the 2018 Ticket Guardian 500