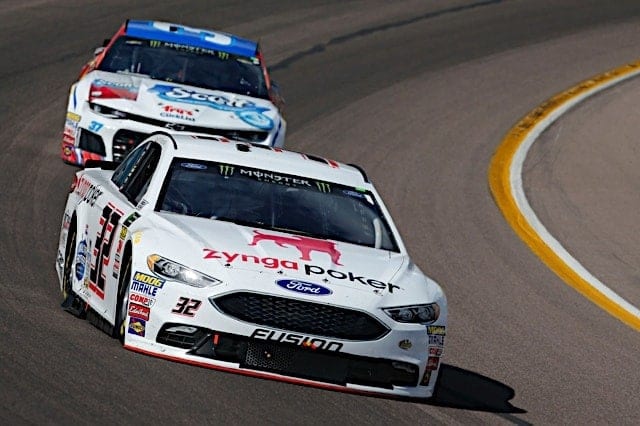 You can say anything you want about social media — there are plenty of positives and negatives — but the weekend at ISM Raceway showcased one big positive: support. And in this case, it took the form of racecar logos for one of our underdog teams who were in major need.

Matt DiBenedetto reached out via simple solo video on social media platforms to discuss his situation. It wasn’t fun, but it was reality and something he knew he could use to get some help. The No. 32 Go Fas Racing Ford was unsponsored on the day of the posting on Monday, March 5.

“I know it’s a last-second effort, but it’s worth a shot. You never know until you try,” DiBenedetto said.

And nearly 2,500 retweets later, the help was found. Not only by sponsors Zynga Poker, Enlisted Nine Fight Company and Pit Stops for Hope, but from drivers Denny Hamlin and Kevin Harvick along with FOX announcer Darrell Waltrip and a private donation from another “big-name” driver.

“For them to think that much of me and want me to be a big part of this sport,” he said. “I’m not kidding, I rode home in my truck like in silence because I was just floored.”

The car was wrapped and they were ready to go racing in the desert. Just like that. And long before the car was unloaded for the weekend in Arizona, we were given another glimpse into not only the power of online exposure but the condensed, impenetrable nature of the NASCAR garage. It’s a feel-good story that would not have been possible in this regard years ago.

In a race that had tire strategy, melted beads, both long and short runs and all three manufacturers packing the punch, Sunday’s TicketGuardian 500 was a difficult day for the small teams to keep up. Heck, only 14 cars finished on the lead lap come lap 312, steadily keeping all these teams one step behind.

AJ Allmendinger was leading underdog of the race, finishing 21st. It was the second straight week the leading underdog was out of the JTG Daugherty Racing camp. His teammate Chris Buescher, who earned the spot in Las Vegas, struggled mightily to 29th, however.

This continued a good start for Chevy, who has been the leading underdog manufacturer in all four races in 2018. Then again, they do field 10 of the 14 teams represented here, Front Row Motorsports’ Ford duo along with DiBenedetto’s Ford and Gray Gaulding’s Toyota are the only non-Chevys.

Still, it was David Ragan and his Ford team who led the underdogs in qualifying. The veteran lined up 16th for the race and fell to a decent 22nd.

To wrap up the Top of the Class, DiBenedetto made the most of his resources even before strapping into the car on Friday morning. He earned support and it came together for a 25th-place result on Sunday. A top-25 isn’t bad, as the No. 32 had just 10 in 26 races in 2017. They now have two in the first four this year.

For the second time in the opening four Monster Energy NASCAR Cup Series this year, there were no underdogs in the top 20. The track conditions on Sunday gave — what seemed like — most of the field handling issues that made it difficult to make quality ground.

Kasey Kahne was the leading underdog two weeks back at Atlanta, but couldn’t top the group again here, finishing 24th. The No. 95 Leavine Family Racing team put the pit game to test late, staying out to run up front before one more stop.

Ross Chastain also played that game, running as high as second before coming home two laps down in 27th. The result was his best through three starts this year for Premium Motorsports.

Ty Dillon has also been off to a woeful start for Germain Racing, finishing 24th or worse for a fourth straight race. This time, 30th place.

It may have taken a while, but the XFINITY Series did get a full race in Saturday at ISM Raceway. For a fourth straight weekend, the series ran tandem with Cup, and the rain-punished event gave us some repeat underdog guys running near the top 10.

For the second time in 2018, rookie Kaz Grala was the leading XFINITY underdog, finishing 12th for JGL Racing. The 19-year-old stayed out during green-flag pit stops to lead his first career laps (eight) before the checkered.

Spencer Gallagher continued a strong start to his sophomore outing for GMS Racing, finishing 14th on Saturday. The finish was a fourth straight top-15 finish for the guy, the first time he’s done so in his 44-race career. Additionally, a fourth top 15 is especially robust, having scored only six in all of 2017. Marked improvement in these early races.

Thanks again @AllWaltrip for your support, we are proud to have the Waltrip Brothers Charity Championship on the car! Such a cool, overwhelming weekend of support ? pic.twitter.com/khvBnOnq8Z

Really solid day for us here @ISMRaceway. Grabbed some stage points early and got our best finish of the season (since Daytona). Great points day, and a seriously fun race. Thanks @JGLRacing and @NETTTSTraining! ?? We’ll keep on diggin’

Great to have @KLOVERadio at the track with us in Phoenix. Thanks for supporting @Mc_Driver. pic.twitter.com/s1yOoXSHQY

Had a blast as a guest analyst for @MRNRadio today during the @NASCAR_Xfinity race! pic.twitter.com/RLdLYb14tZ

While the DiBenedetto story may be a feel good one, that masks the real story. That of the chartered teams, one is in, and likely will never exit bankruptcy, one has to appeal to social media to get the funds, presumably, to race, while a third is to some degree dependent on nascar and other interested parties who wish to ensure that there is at least one driver who shows some diversity in the field.
Long term it doesn’t bode well.

But Brian says everything is good. I guess that’s because he’s getting his money.

Brian isn’t the real problem. Part of it – absolutely. But there are so many things wrong that its hard to point at just one. A death by a thousand cuts I suppose.

As I have said before why should I spend hours watching something that is boring when only the last few minutes is important, and that not all the time?
On the other hand as long as it is the most watched sports event on Sunday the TV money will continue to flow in.

I said years ago that it was like an NBA game. Watch the last two minutes and it’s all you need to know.

So now Matt DiBenedetto gets the Sally Field award for his “The like me. They really like me.” comment. No, Matt, you got money from other drivers because they know you are no threat to win anytime ever. And just perhaps, they thought having a backmarker in their back pocket could be a useful thing to have in the event they needed a late caution or a fellow competitor needed “holding up” by a lapped car.

I call BS on the whole thing. Face reality and get a real job, Matt!