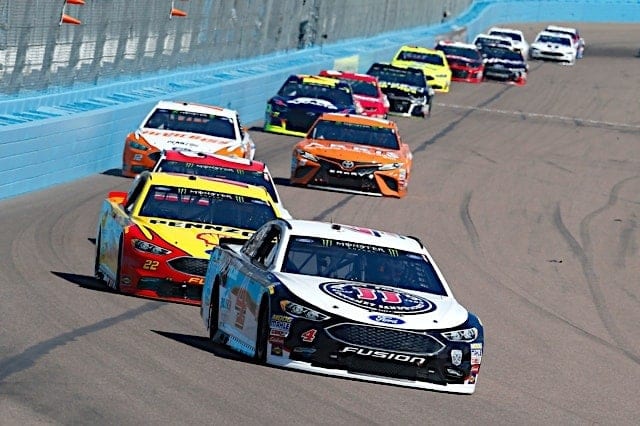 Kyle Busch won the opening stage of the TicketGuardian 500 and led a race-high 128 laps at the newly-renamed ISM Raceway (formerly Phoenix International Raceway), but Kevin Harvick earned his third straight Monster Energy NASCAR Cup Series victory, and ninth overall at the track, which tied him with Mark Martin at 40 MENCS wins.

Busch finished runner-up for the second week in a row, while Elliott was the only Chevrolet in the top 10, finishing third. Hamlin was fourth, followed by Martin Truex Jr. to close out the top-five finishers.

In other news, Hendrick Motorsports put all four of its cars in the top 15 and on the lead lap to go with Elliott’s third. Rookie William Byron led laps before finishing 12th, Alex Bowman was 13th and Jimmie Johnson left with a 14th-place result. Kyle Larson dominated early before fading to 18th.

It was a good day for teamwork. Stewart-Haas Racing had the best day in its history, as all four cars finished in the top 10 for the first time ever. Harvick’s win, Clint Bowyer was sixth, Aric Almirola seventh and Kurt Busch 10th with a stage win.

Jamie McMurray‘s 25th-place finish on Sunday was another disappointing run to start the 2018 season. He’s finished 16th at Daytona, 19th at Atlanta and 36th at Las Vegas for an average result of 24th, which puts the Chip Ganassi Racing driver at 28th in the standings with 53 points.

Elliott earned Hendrick Motorsports’ first 2018 top-five finish with his third-place result. His Phoenix finishes in the Cup Series are eighth, ninth, 12th, second and third, an average of 6.8, which isn’t too shabby. He now has both of Hendrick’s top 10s this season, but he’s only led four laps so far and sits just outside the playoff bubble at 17th place, tied with teammate Alex Bowman with 91 points.

Through four races, Darrell Wallace Jr. has finished second, 32nd, 21st and 28th. He’s a rookie, and Richard Petty Motorsports did change manufacturers from Ford to Chevy during the offseason, but at this time last year, Almirola’s finishes in the No. 43 were fourth, 27th, 14th and 17th.

Taking care of those in the extended NASCAR family when they need it. After Matt DiBenedetto and Go FAS Racing posted a video on Twitter last Tuesday asking for sponsorship, Harvick, Hamlin and Darrell Waltrip all stepped up to pitch in to help the No. 32 out, and primary sponsorship came from video game company Zynga (the makers of Farmville and Words With Friends), advertising its Zynga Poker game. DiBenedetto finished one lap down in 25th, which was a solid day for his underdog team.

The 500 in TicketGuardian 500 stood not for miles or laps, but kilometers – the race distance was 312 miles. That excursion to the metric system felt overly confusing. Considering that the outcome was fairly predictable, it felt like the race stretched out forever, even though it’s one of the shorter events on the calendar and there was hard racing throughout. Maybe that will change in November when the start/finish line moves to the current Turn 2?

Nothing especially stood out, in particular, this week, but I’ll go with Brad Keselowski‘s Alliance Truck Parts No. 2 for this space. The black and yellow looked sharp and had enough contrast to easily read the number and sponsor, and that two-and-a-half stripes template Team Penske uses makes it instantly clear which team any of its cars belong to, which is helpful when the sponsor changes every week.

This week the Cup Series goes to Auto Club Speedway in Fontana, California, for the Auto Club 400 on Sunday, March 18, at 3:30 p.m. ET, with coverage on FOX. Harvick and Kyle Busch should be good picks, having won there before. Plus there are their recent hot streaks. Keselowski has also won at Fontana and should be able to bounce back from a lackluster race, and Larson is the defending race winner. They would all be good bets for your fantasy team. Johnson has won six times at Auto Club, and his finishes have been improving to top-15 form the past two weeks.

Again, in the interest of accuracy in reporting, please note that Chase Elliott is 16th in the points standings. Ties are broken by highest finishing position and Chase’s 3rd place finish is higher than Bowman’s highest finish. What do you use, alphabetical order?

Accuracy and correct spelling in reporting, surely you jest.

Bubba hasn’t finished on the lead lap since they left plate racing. At least that has shut DW up about bubba this & Danic a that. Can’t wait till Aric takes the #10 to victory lane. Tony got his dig in, proud of how all 4 of his drivers are now contributing feedback that helps the team

the zl1 camaro is one of the fastest production car in the world ,getting its lunch handed to it by two groscery’s getters chevy got to be happy

You cant seriously think these things have anything to do with production cars?

“Nothing special stood out?” Seriously?!? #18 Skittles Heat! Black car, Skittles rainbow on hood and side panels, then flames around skirt and on front nose and rear!