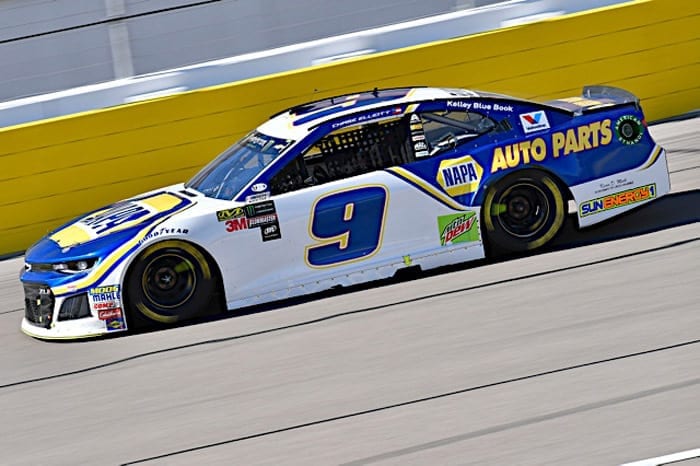 The Penalty Report revealed that the truck trailing arm spacer/pinion angle shim surfaces on the Elliott’s rear suspension was not in complete contact at all points at all times, thus violating Section 20.14.2 of the Monster Energy NASCAR Cup Series Rule Book. This rule is in place, because if these surfaces fail to adhere at all times, it can create additional sideforce on the car.

As a result, Chase Elliott has been deducted 25 driver points, dropping him from 16th to 23rd in the points behind Trevor Bayne. The Hendrick Motorsports No. 9 team will also lose 25 owners points. Car chief Josh Kirk has been suspended for two races. Crew chief Alan Gustafson has been fined $50,000.

As with most penalties, Hendrick Motorsports has the right to appeal to The National Motorsports Appeals Panel. They have not indicated whether they will do so at this writing.

Five more Cup teams received penalties for having one loose lug nut during post-race inspection Phoenix. Joe Gibbs Racing’s No. 11, Penske Racing’s No. 12 and No. 22, Roush-Fenway’s No. 17, and Furniture Row Racing’s No. 78, were in violation. Respective Crew Chiefs, Mike Wheeler, Jeremy Bullins, Todd Gordon, Brian Pattie, and Cole Pearn each received a $10,000 fine from NASCAR.

In the XFINITY Series teams, Penske Racing’s No. 22 (race winning car), and Joe Gibbs Racing’s No. 18 also received penalties for having one lug nut not secured during post-race inspection. Respective Crew Chiefs Brian Wilson, and Eric Phillips were each fined $5,000.

Finally, JTG Daugherty Racing’s former car chief on the No. 47 Chevrolet, Brandon J. Lee, and Wayne F. Kanter, a Tuner for JGL Racing’s No. 24 in the XFINITY Series, violated the Substance Abuse Policy. Both men have been suspended indefinitely from NASCAR. They can only be reinstated upon completion of the Road to Recovery program.

Wow, maybe the little tattle tail should pay attention to what is going on with his own team..PFFFTTTTT.

Hendrick will appeal to the completely unbiased panel and guess what? The penalty will disappear with apologies to Mr. H for the embarrassment this has caused this pillar of NA$CAR.