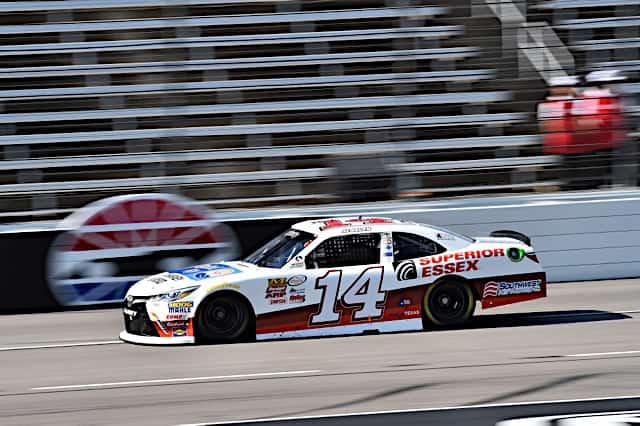 In 2014 and 2015, TriStar Motorsports had five NASCAR XFINITY Series teams. Fast forward three seasons and the team no longer fields any entry in the division.

Last season, J.J. Yeley ran full-time for the organization, finishing 14th in the series standings. However, the organization was working with a limited budget as the No. 14 car went unsponsored in 15 of the 33 races.

Had the team made the playoffs in one of the last two seasons, maybe TriStar would still be competing full-time in the XFINITY Series. But then again, maybe not.

Yeley finished 14th in the standings each of the past two seasons, and though the team didn’t make the post-season, it took a lot of pride in trying.

“We were close to making the playoffs both years, and that’s something we’re really proud of,” Bryan Smith, owner of TriStar Motorsports, said. “In all honesty, for the amount of people and the budget that we have, we shouldn’t even be considered to be a playoff team on paper.

“We just came up a little bit short, but I don’t think it’s anything we’re upset about – we’re more proud of the fact that we were in contention for it.”

Though Yeley posted a sixth-place finish at Iowa Speedway last July, the team was working with a small budget. The car was nicknamed Black Betty, because it was unsponsored. As for any other small NASCAR team, it’s difficult to survive while working with limited resources.

“Not having quite as many guys in the shop building the cars when the guys were on the road definitely hurt,” Smith said. “We’re very fortunate that we have very good people. The facts remain that we don’t have the budget to be building as much stuff and trying some stuff on the stuff we have. I think that’s the hard part of not just having the ability to try enough stuff and test as much stuff to try and get ahead.”

Heading into 2018, TriStar Motorsports had competed in the XFINITY Series during the previous eight seasons. In 2010, Tony Raines ran a full schedule for the team, finishing 17th in the championship standings, while Jason Keller ran in 27 events, finishing 22nd at year’s end. Out of the 34 drivers to compete in at least one race for the team, Keller owns the highest finish of fourth, which came in its first year of existence at Talladega Superspeedway.

As for 2018, it wasn’t until after the season finale at Homestead-Miami Speedway that Smith realized the team wasn’t going to be able to run an XFINITY program this year, switching the focus solely to the Cup side.

“It was something that we discussed as we looked through our options and kind of what we wanted to do for this year,” he said. “Early into the off-season, we had several different directions we could go, and as things happened and our pictured started getting clearer, it wasn’t real late into the off-season that we realized it wasn’t the best move to try and do two series full-time, again.”

Corey LaJoie and Cole Whitt are splitting time in the No. 72 Cup car this season for the team. The organization also had to switch race shops as in the past it leased a GMS Racing shop.

In order for the team to focus on putting the new Chevrolet Camaro ZL1 to test and moving equipment from its old shop to its current garage in Mooresville, N.C., it had to drop long-time XFINITY program.

“We believed our season was shaping up with having the new shop and having to put new bodies on all of our Cup cars and having the new composite bodies,” Smith said. “It just seemed like the work force and from a budget standpoint, it was going to be very, very difficult to get all of that done and still feel like we’ve short-changed it. To be competitive like we want to be, it just didn’t seem like it wasn’t going to be able to be done in the time frame we had to get all the work that we had to get done. It seemed like the right move at the time was to scale back and focus on the Cup effort.

“I would still like to be around the XFINITY garage and would like to run some races this year. It’s not like we’re totally trying to get away from the series. It just didn’t seem like doing a full-time effort with what we were going to be able to put together workload with all cars needing new bodies and having to move shops and all that comes along with that, it just didn’t seem like we were going to be able to contend at the level we wanted to do it.”

Smith confirmed that he would like to run at least a handful of XFINITY races this season “just to have a presence in the series.” The company still has its fleet of cars from 2017 that it used for Yeley, with seven or eight cars built in-house.

TriStar Motorsports did sell some of its chassis to the newly-formed JP Motorsports, though those are a bit dated.

As far as 2017 and Yeley being sponsored for just 18 races, Smith declined to answer whether or not the company made a profit from competing in the XFINITY Series last season. That discussion goes hand-in-hand with the current economic climate in the lower divisions of NASCAR.

“In all honesty, the Cup Series, the XFINITY Series, both of them are expensive series to run in,” he said. “It’s getting harder and harder on either side to find partners that are looking to come in and that this matches their marketing strategies.

“I feel like a lot of things that are being done in an effort to save costs and to try and even some of that stuff is going to be a big benefit and will help a lot of the smaller teams. I don’t know that we have seen the benefit of that just yet, but I think some of it will be a plus to the teams at our size.”

I have a friend who owned an XFinity team for many years. He moved to Cup a few years ago solely because the race purse for finishing in the back half of a Cup race paid over FIVE TIMES MORE than running 25th every week in XFinity. Easy call…

I think Dustins bio should say 2018 (as in ‘18’) is his 3rd season, etc
Thanks for interesting article

I no longer watch truck series racing. I am not interested in watching when all trucks have chevy engines.