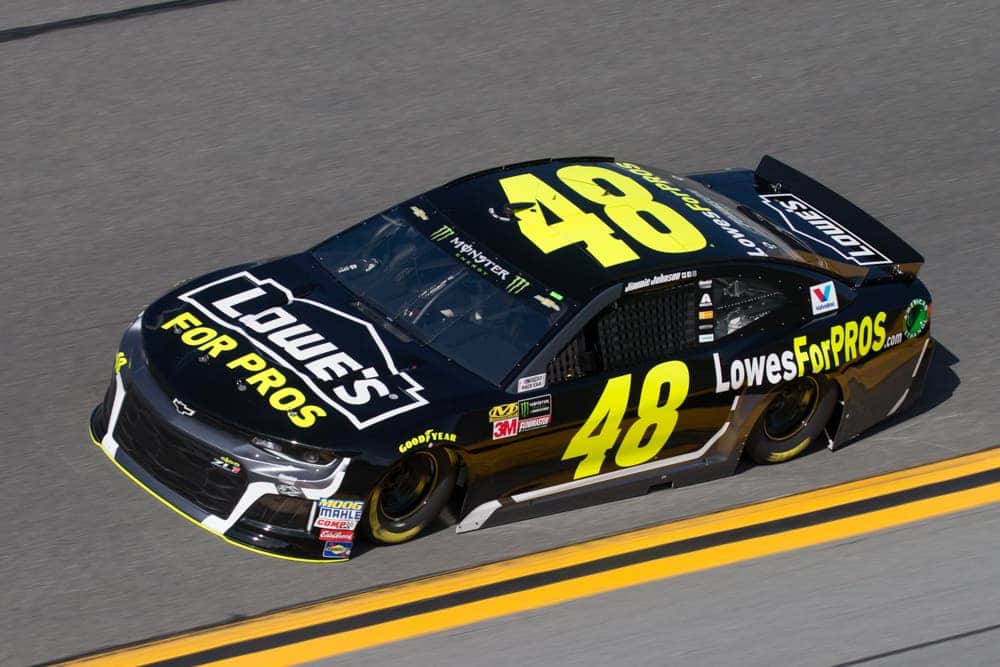 On Wednesday (March 14th), long-time NASCAR Sponsor, Lowe’s, announced it will end their sponsorship with Hendrick Motorsports’ seven-time Monster Energy NASCAR Cup Series Champion Jimmie Johnson at season’s end. The Home-Improvement chain will be leaving NASCAR entirely after 2018, according to The Associated Press.

“The No. 48 team is a valuable property and has been an integral part of building the Lowe’s brand, which makes today’s decision difficult as we now look to invest in other strategic initiatives,” Lowe’s chief customer officer Michael P. McDermott said in a statement.

Lowe’s was one of the few sponsors that funded most of the MENCS 36-race schedule. When four-time MENCS champion, Jeff Gordon, convinced team owner Rick Hendrick to take a chance on a young Jimmie Johnson, Hendrick sold the idea to Lowe’s. Ever since Johnson’s Cup debut in 2001, the pairing of Johnson and Lowe’s have gone on to win a record-tying seven MENCS championships, as well as 83 race wins and counting.

“Jimmie is one of the greatest champions and ambassadors in all of sports and still at the top of his game,” Hendrick said. “This change opens up all kinds of possibilities, and we look forward to having conversations with potential new partners. It’s a special opportunity with an iconic athlete and team.”

Lowe’s admitted that they felt like they won the lottery with their initial contract with Johnson. According to The Associated Press, they also signed on as an associate sponsor for Jeff Gordon in case Johnson was a bust. Lowe’s would’ve used Gordon as their brand ambassador.

“I’ll always be grateful to Lowe’s for taking a chance on me and believing that I could win,” Johnson said. “I’m not sure where I’d be right now if they hadn’t committed to the No. 48 team. It’s hard to see them move on, but we’ve made history together and celebrated so much success on and off the track.

“I have more to accomplish in this sport. I feel the best I’ve ever felt physically. I’m motivated. I’m focused on winning races and chasing more championships. Someone will be a big part of writing that story with us. I’m not going anywhere.”

Before sponsoring Johnson, Lowe’s also sponsored Charlotte Motor Speedway from 1999-2009. Before that, they were the primary sponsor of Mike Skinner’s No. 31 car run by Richard Childress Racing from 1997-2001.

If this isn’t a statement of the sport then nothing is!

Given business conditions today its quite a statement that they stayed committed to the sport for that long.

Little by little, NASCAR siphoned off potential team sponsors by signing up companies as the ” official widget sponsor of NASCAR”. This greed by NASCAR over the last two decades landed us where we are today with teams unable to find willing partners. This was so predictable– Greed, pure greed by Brian & Co.

I have always been a hater of the cheating 48 team. That being said, Lowe’s announcement, IMO, has little if anything to do with either the 48 team or Hendrick, which remains one of the more valuable commodities in NASCAR.

This has everything to do with the sorry state of the sport and its mismanagement by Brain Fart France and his band of lackeys. Attendance is down, Tv ratings are significantly down, marquee names have retired, and there is no indications that things will uptick anytime soon. It is just a simple matter of Lowe’s believing its marketing $ are more effectively spent elsewhere.

This is another canary dying in the coalmine. Wonder if Brain Fart will finally wake up and realize that he is ruining the sport? I doubt it.

Who’s going to be next?