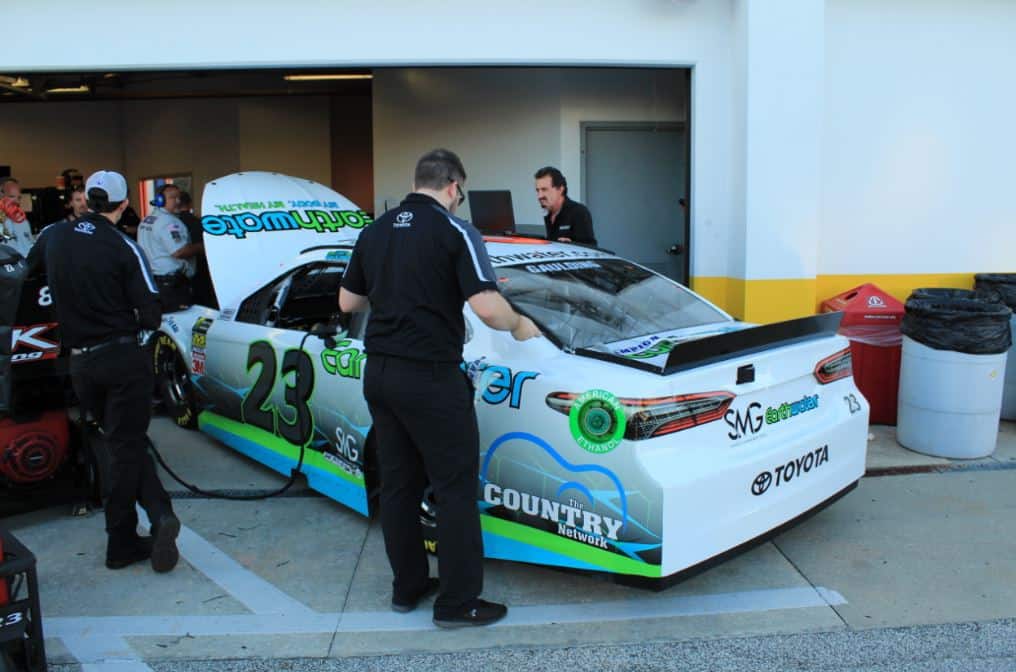 There is no NASCAR team hotter right now than Stewart-Haas Racing.

The organization is hitting its marks each week it seems, with all four of its drivers having at least a pair of top 10s through the first four Monster Energy NASCAR Cup Series races. If it weren’t for some unfortunate incidents, we might very well have seen some extra top fives thrown in there as well.

This is a big year for Stewart-Haas Racing, in the midst of its second season under the Ford umbrella. With Kevin Harvick taking control of the Cup Series over the past three races, it’s looking like SHR has improved significantly from last year.

On the other side of the garage, it appears as if the storm may be clearing around BK Racing’s shop. There hasn’t been as much news surrounding the team as of late.

And, finally, Earthwater has considerably stepped up its partnership with the No. 23 team to start the year and Gray Gaulding is entered for the fifth straight race. However, there still has been no official word from the organization as to whether Gaulding will be in the car for the entire season.

Q: Do you think the mess at BK Racing will be settled by the end of this year, and do you expect Gray Gaulding to stay with the team the whole season? – Zach C.

A: We’ve seen this time and time again. Just because a driver says they are running a full season doesn’t necessarily mean that’s what will happen.

Let’s recall that Gaulding thought the same thing last year. Guess what? That didn’t happen either.

I highly doubt Gaulding will be with BK Racing for the whole season. BK Racing has been looking for additional sponsors and driver combinations for the remaining portion of the year. The team did indeed have plans to put someone else in the car for ISM Raceway, a source close to the situation told me at Daytona, but requested anonymity on the degree that it could hurt a future partnership.

Gaulding has been doing a respectable job given the equipment he is in to start the season. He started the year off with a solid top-20 finish at Daytona.

The following two races saw the No. 23 car face mechanical issues, recording DNFs at both Atlanta Motor Speedway and Las Vegas Motor Speedway. Come ISM Raceway, Gaulding was able to finish the race without going to the garage but ended the afternoon eight laps down in 34th.

As far as the entire situation surrounding BK Racing, expect that to be solved in the coming months. Unless we see the bank take away literally everything Ron Devine owns, the organization should be at the track for the rest of the season.

Devine has stated multiple times that the team will continue to race, and there is reason to believe him. Look at the circumstances the organization faced to start the year. They didn’t even have a driver and sponsor until less than a day prior to the first Daytona 500 practice. Yes, it was that late in the going.

Gray and the @EW_Racing team faced adversity but kept their heads up and will move on to @ACSupdates.

Q: Why is Stewart-Haas Racing so strong to start the 2018 season? – Kelly B., Charlotte

A: It’s SHR’s second year with the blue oval, and expectations were higher entering the season. Sure, the organization had months to prepare for the 2017 season given the time frame for when it announced the move to Ford. But the organization still only had two months for SHR to fully focus on prepping its new Fusions.

Besides Kurt Busch’s win in the 2017 Daytona 500, it was a growing year for SHR, one full of adjusting to a new manufacturer and everything that came with the change. Harvick only had a pair of wins, with Clint Bowyer and Danica Patrick both missing the playoffs.

Now that SHR has had a year to get comfortable with the manufacturer switch, the team is geared up and has come into the 2018 season stronger than ever.

Not only does Harvick have three straight wins, but Bowyer, Busch and new teammate Aric Almirola are all running well. Combined, they have an average finish of 12.25. They currently hold first, and ninth to 11th in the Cup Series standings, one of the strongest starts — if not the strongest — in team history.

Almirola is definitely the most surprising of the group, nearly winning the Daytona 500 and finishing no worse than 13th through the first four contests. Clearly, that No. 10 team is seeing major improvements to start the year.

The No. 41 team is also off to a solid start — without the crashes at both Daytona and Las Vegas. Even then, Busch was running well and proved to be a factor in each event.

At ISM Raceway, the No. 41 team struggled early before managing to finish its day with a top-10 finish.

These results are a slight improvement from the three races following last year’s Daytona 500, when Busch only finished seventh at Atlanta before earning results of 30th and 25th, respectively, in the next two contests.

Then, there is the curious case of Bowyer. He’s in a contract year, and as we’ve discussed before, he definitely needs to make the playoffs and win at least a race (if not more) if he wants to keep his job.

Bowyer has improved in each race this season with the exception of Las Vegas, where he went down eight spots compared to last year and finished 18th. He’s ninth in the standings, and that No. 14 car was quite strong at Atlanta, too.

Overall, the team has invested in Ford, and Ford has invested in the team. Thanks to the strong relationship that is developing, expect not only Harvick to enter Victory Lane this year, but all four of the team’s cars. There is no reason why each driver can’t win at least one race with the speed they have shown early on.

Given the bankruptcy by BK Racing, and the apparent unlikeliness of their emerging from it it would appear their days are numbered.

Not many companies can succeed with 25% deadwood. The driver change on #10 has fixed that problem.

ford teams payola checks are being cashed by brain fart. last year it was toyota.

Same old crying baby line when your manufacturer you like does not win. Stop crying!

the zl1 is one of the fastest production cars in in the world getting its clock cleaned by two grocery getters chevy has to be happy. its worst than the SS . THE EXPERTS SAID THE FORD WAS THE OLDEST AND WAS AT A DISADVANTAGE! THE CAR ARE SUPPOSED TO AERO EQUAL AND HP/TORQUE EQUAL NOW THE DRIVERS WILL MAKE THE DIFFERENCE ……….. NASCAR RELEASE ALL AERO/HP/TORQUE NUMBERS AND SOME WRITER OUT THERE COVER THE REAL STORY QUIT BEING BUTT BOYS /GIRLS..