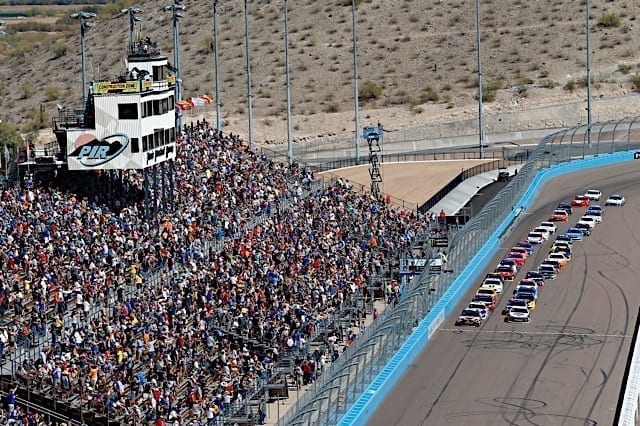 Four races into 2018 and only two winners.

Though Kevin Harvick didn’t show the same dominance in Phoenix as he did in Atlanta and Las Vegas, he still managed to find Victory Lane for the third consecutive week this past Sunday. The landscape in the desert may have looked a little different, but Harvick had to largely go through the same competitors to claim his third win in four races.

Meanwhile, Hendrick Motorsports showed a little more speed than in recent weeks, but it’s clear the organization is still a little off.

Harvick remained in the points lead while Kyle Busch and Martin Truex Jr. leapfrogged over Joey Logano for second and third. Meanwhile, on the other end of the spectrum, Darrell Wallace Jr. and Chris Buecher had less than stellar runs, allowing Chase Elliott and Erik Jones to sneak into the top 16.

The real contenders have begun to emerge following NASCAR’s second race of the West Coast Swing.

After penalties were handed out on Wednesday, the No. 4 team was docked every benefit from the victory the prior weekend at Las Vegas. All of the hard work was basically thrown away due to a window brace failure and steel skirting on the car. Though the team took full responsibility for the steel side skirting, the window brace failure left many members of the organization angry.

Harvick is one of those guys in the NASCAR garage that you don’t want to make mad. Whether it be an on-track issue with another driver or taking a win away from his guys who worked so hard to get it, on Sunday, Harvick proved he is a force to be reckoned with. The win was, in essence, a statement that said “you can knock us down but we’ll just come back even better”.

Following the race in Victory Lane, Harvick explained how the penalty affected him personally.

“I’ve been mad as all get out because this team does a great job,” he said. “This organization does a great job and we’ve got fast race cars. And to take that away from those guys just really pissed me off last week. To come here to a race track that is so good for us is a lot of fun and everyone was just determined this week and we just wanted to just go stomp them. We didn’t stomp them, but we won. That’s all that really matters.”

Harvick also adressed his supporters and his haters during the Victory Lane interview on Fox.

Kevin Harvick has a message for the haters. pic.twitter.com/7RTcAdZuDA

You know that feeling when you are so close to victory that you can almost taste it? Kyle Busch knows this feeling all too well and for the last two weekends, he’s led the most laps only to finish in the runner-up position.

Another weekend of struggle in the XFINITY Series leaves Busch zero-for-three this season, which is definitely a treat for all of those “haters.”

This was yet another weekend where, if Busch would have had just a few more laps, he very well may have been in Victory Lane. Instead, he was once again left frustrated.

Busch, Harvick, and Denny Hamlin all battled for the lead toward the final pit stop. Hamlin earned his third top-five finish of the season on Sunday and had a Toyota that would compete for the victory in the end. It’s unknown at this point if that speed will carry into California, an aero-reliant track, but if it does, look for Hamlin to be a contender for his first Auto Club Speedway victory.

Hamlin was in the headlines at Auto Club back in 2013 when he and Joey Logano made contact at the exit of turn four, sending Hamlin head first into the inside wall. The impact would result in four races on the sideline with a back injury. Can Hamlin make it in the headlines for a different reason on Sunday?

I once received financial help from a competitors team owner… it was the end of the road for me, He kept me going. https://t.co/egtXKlDDMg

Keselowski had to take some risks this weekend for the sake of track position. He started 25th and was able to work his way into the top 10 where he remained for most of the afternoon.

Late in the race, Paul Wolfe and team made a fuel gamble that didn’t pay off and would hurt their overall finish (15th). Keselowski remained seventh in points with the performance, which was a good thing that came out of the weekend.

Fun first stage of the @NASCAR_Xfinity race. Hope the rain blows away soon so we can get back going.

We have a real fast car, gotta be a little more aggressive to make it count.

Entertained by Scarlett videos while we wait ? pic.twitter.com/7NMKoHLXgd

Keselowski also earned the victory in Saturday’s DC Solar 200 XFINITY Series race. Two red flags for rain left the driver with some free time. During the rain delay, drivers found many different ways to occupy their time. Keselowski was entertained by videos of his daughter Scarlett, like this one!

Logano seemed a little off this weekend in the speed department. He failed to lead a lap for the first time since Homestead last November along with earning his worst finish since Martinsville last October. A 19th-place finish wasn’t what Logano wanted to see but what made that a little sweeter is Harvick taking the checkered flag. He now sits fourth in points heading to a track he has had success at.

Logano needs to start clicking away at better finishes if he’s going to avoid missing the playoffs for the second year in a row.

Who knows — a victory could be just around the corner for the Middletown, Connecticut native.

That was a rough one. We got work to do before we come back out here in the fall. We will learn from this and get better.

How do you rebound from two straight weekends of issues during qualifying? You go out and win the pole the next week and that is exactly what he did. Truex earned his first pole since Kansas last October and overall had a good weekend.

Truex still has some catching up to do if he wants to compete with Harvick, Hamlin and Busch for the victory but moving up to tie for second place in points seems to mean he’s moving in closer to the front of the field.

Last November, Blaney won the pole and led some laps, but on Sunday, that November magic seems to have vanished into thin air. Like his Team Penske teammate, Blaney was off during the weekend, failing to earn any stage points during the race. The fact that all three Ford from Team Penske struggled this weekend could add some concern for future races, but Auto Club presents an opportunity for back to normal for the organization.

Everybody on the 12 worked hard all weekend, can’t thank them enough for that. Those days happen. 364 mile drive to LA begins, have some exciting things this week. Looking forward to showing it. Have a good one.

Busch had a fast car on the long runs and seemed to have the car to beat during the first two stages of the race. He managed to pull off the victory in stage two, but after that, it seemed like the No. 41 team just couldn’t catch a break. Still, a top-10 finish is something to smile about, especially following a weekend where he was involved in a crash with Chase Elliott.

Solid day. Stage win, 10th overall, and unofficially passed the most cars. Thanks @Mobil1 for the weekend, love the technology support pic.twitter.com/PGpSCx1uSp

Elliott led the charge for Hendrick Motorsports on Sunday, something one of the four drivers needed to do eventually. He ran up front a majority of the afternoon and even competed with Kevin Harvick in the final laps for the victory. The third-place finish would be his best since his second-place result last November at ISM Raceway.

The third place finish pushed the No. 9 team into the top 16 in points and a neon light at the end of a dark tunnel for Hendrick Motorsports that could result in the Dawsonville Pool Hall siren going off in the next few weekends.

The day started off so promising for Larson and the No. 42 team, but it went downhill fast and resulted in an 18th-place finish, hindering any move on the power rankings. After qualifying second, Larson led a good chunk of laps and finished third to end stage one, but after that, he seemed to dissapear from the front and would never make it back up there.

One positive for Larson is that the series returns to Auto Club Speedway this weekend, a track that has been kind to him in the past.

Tough race for us yesterday. We’ll be good this coming week.

No Dillon? About time!