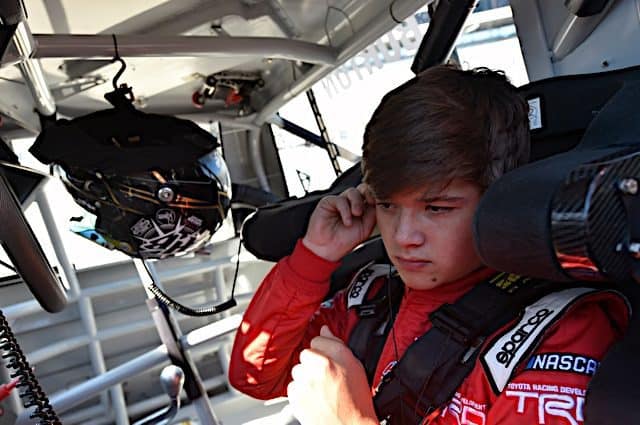 In the press conference following their win at ISM Raceway on Sunday (March 11), Kevin Harvick and Tony Stewart were critical of NASCAR’s and the Phoenix track’s commitment to regional and local racing.

Harvick chided the track for getting rid of the K&N Pro Series West race and NASCAR for setting its sanctioning fees too high. Stewart questioned ISM Raceway for spending $170 million on renovations, but not putting up money for regional races.

Is NASCAR doing plenty for grassroots racing, or does the governing body need to step up the support?

Where Did That Guy Come From?

All too often, when a relatively new driver in one of NASCAR’s top three national touring series makes a splash, an interesting thing takes place. Many race fans, some who could be considered “diehards”, spend a few moments opening a search engine and entering the name of this newcomer. They want to know who this driver is, where they came from, and what other levels of racing they’ve participated in.

But should they need a search engine to tell them that?

Years ago, one could turn on their TV and click to ESPN, TNN, or Speedvision and find all kinds of lower divisions of auto racing. There were racing tours from across the country. American Speed Association (ASA), Hooters Pro Cup, Busch North Series, Goody’s Dash Series, Winston West, and others were featured from tracks of nearly every variety. Want to see the Winston West cars race at Mesa Marin Speedway in California? It was on TV. How about the Pro Cup at USA International Speedway in Lakeland, FL? Yep, that was televised too.

For example, in 1998, I watched an ASA race from Memphis Motorsports Park. It was the first time I heard of one of the drivers. He ended up scoring the win and I took note that he might end up being pretty good. Who was the driver that I was introduced to that afternoon? Jimmie Johnson.

Now fans have to do most of the work to learn about up and coming drivers. Few of the feeder series are televised with any regularity. Fans initially gravitate towards drivers like Todd Gilliland, Harrison Burton, Ryan Blaney, and Chase Elliott not because they admire their hard-charging style or impressive accomplishments in late models or the K&N series. It’s because fans are already familiar with their successful fathers.

These drivers deserve the opportunity to earn fans based on their own attributes, be it personality, driving style or success. Their last name shouldn’t be a primary calling card. But it’s hard to build a following in a series that, quite frankly, doesn’t have much of a following to begin with.

NASCAR does have programs in place, such as NASCAR Next. NASCAR Next is designed to introduce fans to a group of young talent under the premise that they will be the future stars of the sport. The idea is commendable but it isn’t without some hard to ignore flaws.

First, the group is selected by NASCAR. Fans don’t vote on the matter. Short track officials don’t nominate their picks, just NASCAR, evaluating drivers in the lower tiers based on past success, potential, and (most importantly) marketability. So the future stars of the sport are who NASCAR tells you they are.

Additionally, the tours they race in are generally not televised and if they are, it usually isn’t live. It’s great that driver so and so is a top NASCAR Pinty’s Series competitor. Have you ever seen a Pintys Series race? I haven’t. I wouldn’t even expect most fans to know the tour competes almost exclusively in Canada. I wouldn’t be able to tell you anything about a driver from that series. Well, other than what NASCAR tells me about them. But I bet most fans would prefer to make up their own mind about that sort of thing.

The way to build support for grassroots racing is to expose more people to it. An amazing thing happens every year at Infineon Raceway. The Monster Energy NASCAR Cup Series runs a companion weekend with the NASCAR K&N West Series. Not Xfinity or trucks but rather a series that greatly benefits from the exposure. Why this isn’t done more often through the season is beyond me. These lower divisions could easily race at tracks from Bristol to Darlington to Homestead. Thus, offering ticket holders value of multiple events in a weekend without subjecting them to 300 miles of “Cup Lite”.

They might even pick out their own future stars of NASCAR. – Frank Velat

Should NASCAR Hold Their Hand Too?

No other professional sport on the planet promotes its minor leagues as well as NASCAR.

When I watch a Houston Astros game, I don’t hear the commentators give updates on the Fresno Grizzlies or telling people to support their local minor league team. Major League Baseball stars only play in minor league games when they are on a rehab assignment; they certainly don’t do it to draw attention to their AAA counterpart. It would be illegal for an MLB player to suit up for a little league or varsity game to support grassroots baseball.

NASCAR, in comparison, does a great job of getting the word out about its lower tiers. In fact, it goes too far in attaching the Monster Energy NASCAR Cup Series drivers and teams to the grassroots.

Every NASCAR XFINITY Series and Camping World Truck Series race is televised, as well as most of their qualifying sessions and practices. Those races are commonly hyped up alongside the Cup race, and the race results are almost as widely publicized as in MENCS.

NASCAR drivers and teams go overboard in their “support” of those series by racing in and winning nearly every event. If they didn’t have Cup-affiliated drivers and teams hogging the top of the leaderboard, then guys like Matt Crafton and Timothy Peters might have gotten a lot more looks when they were new on the scene. Having Cup drivers in an NXS or CWTS race every once in a while is good for the drivers of those series, and it does spark some excitement, but having them there nearly every week has an adverse effect.

The MENCS invasion is encouraged by NASCAR and its tracks, hence the numerous companion weekend where all three of the top series are racing. It’s exciting for the NXS drivers to race at legendary tracks such as Daytona International Speedway and Darlington Raceway, but having their races the same weekend as the Daytona 500 and the Southern 500 greatly takes away overshadows those experiences.

I do not wish to see the same thing happen to grassroots racing. The regional series get a decent amount of exposure. Most of the races of the ARCA Racing Series, K&N Pro Series and Whelen Modified Tour air on national television. Not all of them air live, but that’s still national exposure for a regional event.

NASCAR has a “Home Tracks” tab on its website that will take you to pages about these series, as well as the international series and the local racing’s NASCAR Whelen All-American Series. These pages provide tons of information to teach you all about these series.

The MENCS telecasts could always stand to advertise these series more, but other than that, the big dogs of NASCAR should keep their hands off of grassroots racing. Right now, those series have their own characteristics that make them special: their own tracks, teams and driver personalities.

Sure, it might be fun and bring more exposure to have a Cup driver race in those series every once in a while, but if they get too involved, and Cup teams start throwing a lot of money into those races, then those series will lose their identities and become what XFINITY and Trucks have become.

Having Harvick in the K&N Pro Series West race at Sonoma Raceway last year was interesting, but that race was even better two years ago when two full-time racers in that series, David Mayhew, and Dalton Sargeant, duked it out for the win.

Even though he lost, I learned a lot about Sargeant’s drive and determination that day, and I’ve watched his climb to Trucks.

And having these tours race on tracks like Sonoma is cool for them, but it’s even better when they race on their own tracks, like the K&N Pro Series East race at New Smyrna Speedway, which is an instant classic every year.

William Byron and Justin Haley didn’t establish themselves by having famous racing fathers, they did so by dominating K&N East. They wouldn’t have dominated had Harvick or Chase Elliott been at every race in superior equipment.

NASCAR and its drivers and teams are as involved in grassroots racing as they should be. If Cup drivers want to draw attention the drivers of the lower levels, then don’t infiltrate their series, steal wins from them and alter the championship race. Instead, do like Denny Hamlin and host an exhibition charity race. Hamlin’s method allows for him to draw attention to local tracks, for local racers to compete against him and for his charity to raise money.

Michael Massie is a writer for Frontstretch. Massie, a Richmond, Va. native, has been a NASCAR superfan since childhood, when he frequented races at Richmond International Raceway. Massie is a lover of short track racing and travels around to the ones in his region. Outside of motorsports, the Virginia Tech grad can be seen cheering on his beloved Hokies.
@m_massie22
Previous Frontstretch Podcast: Happy Times for Happy Harvick
Next Did You Notice?: NASCAR’s ‘Lowes’-t Point