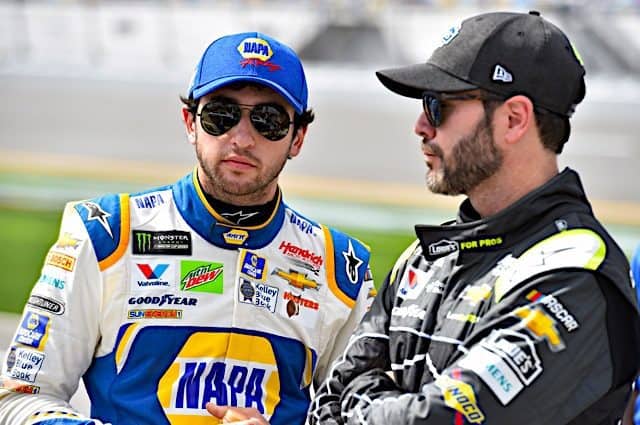 Did You Notice?: NASCAR’s ‘Lowes’-t Point

Did You Notice? … One of NASCAR’s biggest sponsors over the last two decades is choosing to abandon a seven-time Cup Series champion? Lowe’s is leaving Jimmie Johnson after the 2018 season, making it the sport’s most recognizable driver/sponsor pairing headed toward divorce.

For Lowe’s, the decision ends over 17 years of sponsorship of Johnson and the No. 48. They’re one of the few sponsors left that pay for a full season; and it’s a premium cost to pair up with a seven-time series champion. (Some have the contract, though itʻs never been publicized, pegged as costing upwards of $25 million a year.)

But there’s little reason for Lowe’s to continue this marketing strategy. For one, their biggest competitor, Home Depot, stopped sponsorship in the sport several years ago. Menards, which backs Paul Menard and the Wood Brothers is the only other main rival still in this space. But their income is nearly six times less than Lowe’s; NASCAR presence aside, they’re getting walloped on and off the track.

That means Lowe’s is paying a premium price in a shopping center where no one else is renting. Not only that, but as NASCAR’s ratings have declined, so has the power and influence of the team it’s aligned with. Since the end of 2015, Hendrick Motorsports has seen Jeff Gordon and Dale Earnhardt Jr. retire and their replacements have gone winless in those cars.

That leaves the pressure (and sole marketability) on Johnson himself to perform, a stage in which the No. 48 team has stumbled. Johnson’s 2017 season was a disaster, period, everywhere you looked down the stat line.

Johnson followed up this downward trend with a 2018 start peppered with goose eggs all across the board: poles, top 10s, laps led. The team sits 26th in points, is adjusting without longtime car chief Ron Malec and hasn’t earned a top-10 finish in ten races. For some drivers, that’s no big deal; for Johnson? It’s the longest stretch of this seven-time Cup champion’s career.

Less time up front means less time in front of the camera. Consider, too, that Johnson falls victim to a new NASCAR marketing strategy of putting their “young guns” front and center. A move to push fresh faces forward sends a message to major companies backing the veterans: if your guy doesn’t win, well, don’t expect us to keep him relevant.

That can’t work with a sponsor who spends more per season than two or three underdog teams combined. So Lowe’s, with Johnson now the oldest driver in the series (aged 42), feels like they’ve maxed out on their investment. Only time will tell if they’re cashing out on just Johnson or NASCAR itself.

Either way, it’s the type of negative news cycle the sport didn’t need. Lowe’s joins Target, Dollar General, Farmers Insurance, and plenty more top-tier companies bailing on primary backing of a race car. NASCAR title sponsor Monster Energy is also giving the runaround on whether they’ll actually renew following the 2018 season. In their place, we’ve yet to see a major Fortune 500 company put the hammer down and say, “I’m backing a car for all nine months.”

No, I don’t want to hear about Click ‘N’ Close. Real talk. NASCAR needs a big-name company to come calling. Microsoft. Amazon. Walmart. Someone who will actually move the needle. Big business needs to stop the bleeding here by hedging their bets on the sport. The only way you stop negative branding now is to get a major corporation to pump out positivity. (A new manufacturer wouldn’t hurt, either. There’s nothing that triggers a spending spree more than a new car and full chassis reset).

Right now is a moment, then where NASCAR CEO Brian France must lead. The sport’s top executive needs to publicly reassure fans, owners, and drivers the sport is on a strong financial footing. And then? He has to deliver.

Here’s the problem: France isn’t exactly the world’s best public speaker. A well-documented series of gaffes, peaking with an awkward November 2016 State of the Sport had NASCAR President Brett Dewar sharing the mic with France at Homestead last year.

So maybe it’s Dewar, then, that comes out and makes a strong statement on the sport’s future. But rumors of new sponsors, teams and manufacturers must be replaced by a different word: reality. Until there’s hard, factual news of fresh money entering the sport NASCAR keeps getting swallowed up by the earthquake of people leaving. Whether it’s ratings down, drivers retiring or sponsors bailing departures become the real story.

Hendrick and Johnson were quick to claim they’re not going anywhere. If there are a team and driver that can weather the storm, it’s them; HMS has done a yeoman’s job at staying fully sponsored. But old favorite Axalta (think: DuPont and Gordon) bailed them out when Farmers left the No. 5 at the end of 2017. New blood and new backers have to be found this time for a veteran that may be in top physical shape but is showing his age on the racetrack.

Long-term, Johnson could easily recover and win that eighth title, just like NASCAR thinks it’s headed back in the right direction. But until they get a corporation to believe in them, shouting their love from the rooftops it’s a moot point. Sports is a business, after all, and these news bites give the impression that business isn’t exactly booming as of late.

Did You Notice? … NASCAR’s resurgence in popularity rests in part on another Hendrick Motorsports driver, Chase Elliott. But Elliott, who along with Kyle Larson have been the only Chevrolet wheelmen without shouting distance of Kevin Harvick, got hit with an L1 penalty Wednesday for a rear suspension violation. Elliott lost 25 driver points, HMS lost 25 owner points and car chief Josh Kirk is suspended for the next two races. HMS says they’ll appeal.

It’s the latest chapter in a career that, to date, leaves Elliott winless. He’s now gone 81 Cup starts without a victory despite 922 laps led and 14 podium finishes. That means once out of every six races, Elliott has run third or better and he still hasn’t found his way to Victory Lane.

So many have compared the young driver to his dad, Awesome Bill, who won in his 116th career start. I’d say the Hall of Famer’s career still turned out OK.

But Elliott’s career is also an anomaly. Take a look at when these Hall of Fame drivers won their first career Cup race.

Elliott’s also a step back from fellow “young guns” he came up the ranks with who’ve already won. Ryan Blaney and Chris Buescher have already cashed in; Larson, Ricky Stenhouse Jr. and Austin Dillon have made major strides. Joey Logano, just a few years older at age 27 is a bona fide title contender.

Sure, Elliott’s come close. But when do we get to a point where close doesn’t cut it? Hard to make the bridesmaid the star of the wedding, right? It’s a window of opportunity for both Elliott and NASCAR that may be closing. Most high-level stick-and-ball coaches nowadays get about three years to win before high expectations turn to impatience.

Elliott is in the midst of year three. The pressure to perform for him couldn’t be higher.

The author of Bowles-Eye View (Mondays) and Did You Notice? (Wednesdays) Tom spends his time overseeing Frontstretch’s 30 staff members as its majority owner. Based in Philadelphia, Bowles is a two-time Emmy winner in NASCAR television and has worked in racing production with FOX, TNT, and ESPN while appearing on-air for SIRIUS XM Radio and FOX Sports 1's former show, the Crowd Goes Wild.
@NASCARBowles
Previous 2-Headed Monster: Is NASCAR Doing Enough for Grassroots Racing?
Next Trent Hindman, Spencer Pumpelly Pace CTSC Sebring Practices