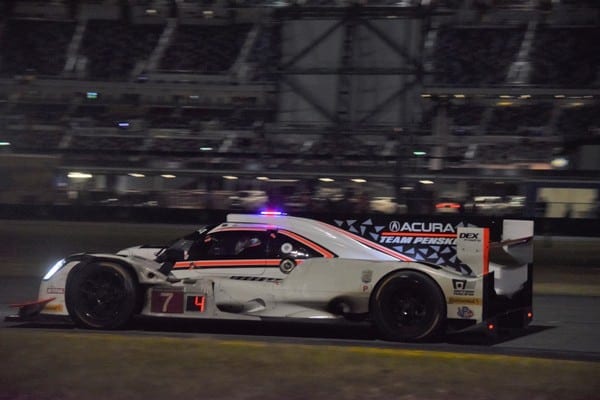 In the morning session, Acura Team Penske’s Helio Castroneves put his Acura ARX-05 on top of the speed charts with a lap of 108.237 seconds (124.394 mph).   Castroneves’ lap was a tenth and a half faster than Spirit of Daytona Racing’s Tristan Vautier in the best of the Cadillac DPi-V.R.s.  Wayne Taylor Racing’s Renger van der Zande was third quickest, followed by Tequila Patron ESM’s Olivier Pla in the No. 2 Nissan.  Mazda Team Joest’s Jonathan Bomarito was fifth quickest.  The top five drivers were separated by just over three-tenths of a second.

While the DPi cars were clustered together to a fair degree, the Global LMP2 cars were off the pace.  Performance Tech Motorsports’ Patricio O’Ward turned in the fastest LMP2 lap, but that was only good enough for 11th, two seconds off the pace.

There was one red flag during the session due to a crash.  Chris Miller spun the JDC-Miller MotorSports No. 99 ORECA 07-Gibson in turn 1 and made contact with the barriers.  Miller was ok, but the car needed repairs in the paddock.

CORE autosport’s No. 54 ORECA 07-Gibson did not set a time during the session.  The team spent the session dealing with brake issues.

Only one lap turned in practice 1. We’re working on a brake issue that lingered despite master cylinder change on pit lane. We’ll get it sorted before practice 2 at 3:10pm ET #Sebring12 pic.twitter.com/EOccuSQcI5

In GT Le Mans, the tight confines of the class continued.  Ford Chip Ganassi Racing’s Dirk Müller was fastest with a lap of 117.567 seconds (114.522 mph) in the No. 66 Ford GT.  That lap was a quarter of a second faster than Toni Vilander in the Risi Competizione Ferrari.  Vilander was only two-thousandths of a second faster than Richard Westbrook in the No. 67 Ford.  Porsche GT Team’s 911 RSRs were fourth and fifth with Frédéric Makowiecki in front of Laurens Vanthoor.

In GT Daytona, Michael Shank Racing with Curb-Agajanian’s Lawson Aschenbach, fresh off the Pirelli World Challenge GTS weekend sweep in St. Petersburg, was quickest with a lap of 120.337 seconds (111.886 mph).  Aschenbach’s lap was nine-hundredths of a second faster than Spirit of Race’s Daniel Serra in a Ferrari.  Montaplast by Land-Motorsport’s Christopher Mies was third quickest, followed by Andy Lally in Magnus Racing’s Audi.  3GT Racing’s Jack Hawksworth rounded out the top five.

In the afternoon session, Acura Team Penske kept up the momentum.  This time, Ricky Taylor put the No. 7 Acura ARX-05.  Taylor’s lap was a full nine-tenths of a second faster than Bomarito.  Action Express Racing’s Filipe Albuquerque was third fastest in the No. 5 Cadillac, followed by Tristan Nunez in the second Mazda RT24-P.  CORE autosport cured the braking issues that effectively eliminated them from the first practice.  Colin Braun put the No. 54 fifth in the chart, best of the LMP2 cars.

In GT Le Mans, it was once again very tight at the top of the class.  Westbrook was fastest in the No. 67 Ford GT with a lap of 117.566 seconds (114.523 mph).  Yes, you read that right.  It was one-thousandth of a second faster than Müller managed in the first session.

Westbrook’s lap was four-hundredths of a second faster than Risi Competizione’s James Calado.  Müller was third quickest, followed by Jesse Krohn in BMW Team RLL’s No. 24 BMW M8 GTE.  Connor De Phillippi in the No. 25 BMW was fifth quickest.

However, that was about where the good times ended for the Shank squad.  With 12 minutes remaining in the session, Justin Marks spun the No. 93 Acura and hit the wall in turn 13, significantly damaging the car.

One of the biggest road racing impacts I’ve ever had today. Freak brake part failure at 130mph. Luckily for we have the @MichaelShankRac team behind us and will attempt a miracle over the next 36 hours to get the number 93 @acura NSX on the grid for the 12 Hours of Sebring. pic.twitter.com/LckaJbd4uD

Despite the huge hit, Marks was ok and walked away.  The crash ultimately ended the session early.  The team has an uphill battle ahead of them to get the car repaired in time for the race on Saturday morning.

Wright Motorsports’ Robert Renauer was third quickest in his Porsche, followed by Philipp Frommenwiler in the No. 14 Lexus.  Sheldon van der Linde was fifth fastest in the Montaplast by Land-Motorsport Audi.

Once the sun went down, it was time for the teams to venture back out for night practice.  A number of drivers had mandatory laps to complete in order to drive at night during the race Saturday night.

Mazda Team Joest was able to break Acura Team Penske’s stranglehold at the top of the timesheets.  René Rast put the No. 77 Mazda RT24-P on top with a lap of 108.233 seconds (124.398 mph).  It was fastest in the session, but slower than the best times put by the No. 7 Acura in both of the daytime sessions.

Rast and Harry Tincknell combined to create a Mazda 1-2 on the charts.  Tincknell’s lap was more than four-tenths of a second off of Rast.  Action Express Racing’s Felipe Nasr was third quickest, followed by Pla.  CORE autosport’s Romain Dumas was fifth.

In GT Le Mans, Müller turned the fastest GTLM lap of the day (117.371 seconds, 114.713 mph) to lead the class.  The lap was two-sevenths of a second faster than BMW Team RLL’s Alexander Sims.  It appears that the recent BoP changes have cured BMW’s power issues (namely, the lack thereof).

Porsche GT Team’s Vanthoor was third quickest in the No. 912, while Westbrook was fourth.  Risi Competizione’s Alessandro Pier Guidi was fifth fastest.

For Westbrook, Thursday was a busy day.  The British racer was tasked with doing all of the on-track preparation as his two teammates were unavailable.  Ryan Briscoe was sick and voluntarily sat out the day, while Scott Dixon was at Texas Motor Speedway testing the Dallara IR18.

Teams have one more practice session on Friday.  That session is scheduled for 8 a.m. and will last for 60 minutes.