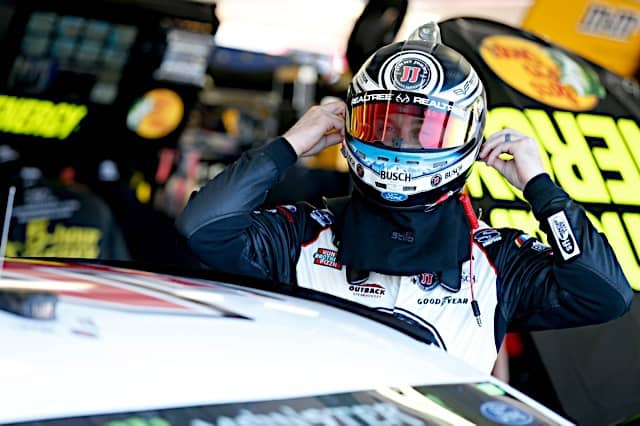 Can Kyle Larson stop Kevin Harvick from winning four in a row?

Jimmie Johnson was the last driver to win four Cup Series races in a row, winning four during the 2007 playoffs en-route to his second Cup championship. History records that Richard Petty won 10 straight in 1967, six in 1971 and Bobby Allison also won five straight in 1971. But this was before the start NASCAR’s modern era (1972), back when there were upwards of fifty races on the schedule and only a handful of drivers running full time. Since 1972, only eight times among eight drivers has the record of four been achieved, and it has only been done twice (Johnson in 2007 and Jeff Gordon in 1998) in the past 25 years.

Harvick has won at Auto Club before; the native Californian emerged victorious in a great three-way duel between himself, Johnson, and Kyle Busch back in 2011. He’s followed it up in the years since with three top-three finishes in six races.

But when it comes to recent success at Auto Club, all eyes are on Kyle Larson, a fellow Californian and the defending race winner. In the three races held last year between Auto Club and its sister track of Michigan, Larson won all three. Even though many Chevrolet drivers have struggled to begin the season, Larson has been good enough to be eighth in points- by far the highest ranked Camaro driver.

This weekend is shaping up to be a big race between the youth and exuberance of Larson and the experience and momentum of Harvick. This is, unless Toyota has anything to say…

Will Martin Truex Jr. or Denny Hamlin break out and dominate?

Toyota of America treats this race much like Chevrolet and Ford treat Michigan. With the track practically being in the company’s U.S. backyard, this is circled on both Joe Gibbs Racing’s and Furniture Row Racing’s calendars every year.

Martin Truex Jr. and Denny Hamlin have both been very consistent to begin 2018. Their average finishes of eighth and seventh respectively are the best in the field, even ahead of Harvick’s 8.5. But they haven’t either had the stage points, race wins, or laps led that Harvick has had.

Last year Truex won the championship off the strength of leading over 2253 laps, but in four races in 2018, he’s led all of 14. He’s third in points, but so far he hasn’t been very dominant at all in 2018. Hamlin has led more laps than Truex, but also hasn’t gotten as many stage points as his fellow Toyota driver and sits sixth in points.

This week, these two and perrinal Auto Club Speedway contender Kyle Busch will be looking to bring home yet another win for Toyota at what they refer to as their home racetrack.

There has been a lot to do about Jimmie Johnson’s struggles to begin the season, but one driver who might have fallen even harder from 2017 so far may have been Jamie McMurray.

McMurray made the playoffs the past three years in spite of not winning a race in that time frame. Instead, McMurray has been pretty consistent. In those three seasons, he has more top-10 finishes (39) than he has laps led (35).

McMurray has a best finish of 16th in 2018, and hasn’t even finished on the lead lap yet. He’s 28th in points, the second worst of all playoff drivers from last year. Kasey Kahne, the worst, at least has the excuse of moving to a much smaller team this year. At this time last year, McMurray was seventh in points. In the NASCAR garage, where you’re stationed at for the week depends on points. This weekend, the No. 1 will be parked next to the No. 34 of Front Row Racing and the No. 95 of Leavine Family Racing. If they need some free Earthwater, the No. 23 of BK Racing is just a couple of stalls over.

There’s a decent chance for McMurray to move up in the standings. Over the past five races in Fontana, he has scored the second most amount of points among active drivers, behind only Joey Logano. But it’s hard for even a consistent driver to make up even more ground than he has lost.

Will the XFINITY race live up to the hype?

The races at Auto Club Speedway have been pretty exciting regardless of series the past few years, but the finish of one race every weekend for the past two has been particularly exciting. That would be the 300-mile XFINITY Series race.

In 2017, everything came down to a fantastic duel between Joey Logano and eventual winner Kyle Larson. If you can get past the fact that these were Cup drivers battling for an XFINITY win, it might just have been one of the best of the year.

2016 was the race that nobody wanted to win. Kyle Busch dominated, leading 133 of 150 laps. But Busch blew his left front tire on the last lap and was passed by Daniel Suarez. Suarez then ran out of fuel and Busch got by him on three tires before Austin Dillon was able to get around Busch for the surprise win.

This weekend will be a particularly interesting race. Larson, Busch, and Suarez are not entered. Logano will be looking to win his first national series race in 11 months. Elliott Sadler, the points leader, has been consistent but also hasn’t solidified his lead with a win yet. Other top XFINITY regulars like Justin Allgaier and Christopher Bell will also be looking to break out with a win.