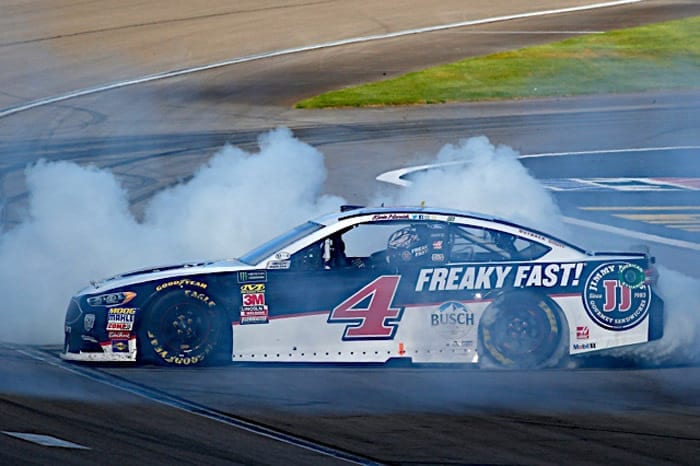 Kevin Harvick has now won three races in a row, becoming the third driver over 40 years old to accomplish the feat. He’s going for four in a row this upcoming weekend in Fontana. Can he do it?

Mark Howell: Harvick has won at Auto Club Speedway before (in 2011), so we know he’s capable of doing it again. We rarely see teams on consistent win streaks like this, so their mojo is in the right place. My guess is that he’ll be the driver to beat come Sunday. If anyone can upset Happy’s victory parade, it’s likely to be Denny Hamlin.

Vito Pugliese: Based off of his dominating at Atlanta Motor Speedway, it would be foolish to bet against him. If you consider that many teams have had their cars loaded and ready to go for the west coast swing the past couple of weeks, there’s probably not much they are going to be able to do to close the gap until they get to Texas Motor Speedway or Martinsville Speedway. You’re not going to be making big swings at body mounting or other aero tricks – both due to time constraints and the new inspection process. The SHR cars have an edge right now not unlike Toyota had last year. The only Chevrolet in the same zip code is Chase Elliott. I wouldn’t bet against Harvick at Auto Club Speedway.

Wesley Coburn: Nope. Three in a row is impressive, but four in a row will be too much to pull off. He’ll probably be in the top 10, but too much competition in his teammates, the Penske drivers, Kyle Busch, Kyle Larson and Elliott. One of that bunch will win (not exactly going out on a limb there, I know).

Drew Mongiello: Right now, I don’t see why not, he has easily been the strongest car throughout the past three races. He wasn’t as dominant at Phoenix, but hey, no one is perfect right? A track like Fontana is heavily reliant on grip and power, which that, along with Ford’s upgraded aero package seems to be favoring Harvick. I pick him to win this week.

The Ticket Guardian 500 at Phoenix wound up being less than three hours long. So was the Pennzoil 400 at Las Vegas. Should we rethink the schedule having multiple 500-mile races besides the “crown jewels” like Daytona, Darlington, Coke 600, etc. or do multiple 500-milers still have a place in the Cup Series?

Matt McLaughlin: While I was initially against the change, the two Pocono races are infinitely more watchable since they were reduced from 500 miles to 400. The one curve ball in the equation is that with the new “two races per engine” rule mechanical attrition under the hood could be a lot bigger use this year than it has been for the last decade.

Christian Koelle: This will get a lot of people out of their comfort zones, but I would really like to see NASCAR go to timed races much like Supercross does. The system is a lot more exciting and leaves a lot more suspense. It also makes for excellent races sometimes like last weekend at Phoenix. As for spreading it out between the series, it’s always been 500 and 400-mile races for Cup, 300 & 200 for XFINITY, and 200 & 150 for the Truck Series and that’s how I think it should stand.

Mongiello: Absolutely. One of the biggest outside criticisms I hear about NASCAR (besides that they only run in circles) is that the races are too long. F1 races are about an hour-and-a-half long. I am not saying we cut the distance in half. However, NASCAR is on to something with stage racing. In my opinion, it has significantly made the middle of the race more exciting. Now, they just need to trim a little bit off of the third stage to make the race a little less exhausting to watch for new fans.

Phillip Allaway: I absolutely believe that 500 mile races still have a place in Cup. These races are not as long as people believe that they are. Maybe it’s the fact that I don’t have kids, but I’m completely fine with the idea of vegging out for well over four hours for a race. Long races are not a big deal for me. They’re not affecting anything negatively. If you cut race length, you are taking the product away from the paying customers. Simple as that.

JR Motorsports already holds the top three positions in the points standings on the heels of their 1-2-3 finish last season. Out of the three (Elliott Sadler, Justin Allgaier and Tyler Reddick) who has the best chance to win their first XFINITY championship this season?

Howell: While I would like to see Elliott Sadler finally win an XFINITY championship, I’m very impressed with Justin Allgaier’s 2018 campaign thus far. Allgaier’s team seems to have everything in order, but time will only tell if they can keep such necessary consistency intact.

Pugliese: Of those three, Sadler. He still seems to have a chip on his shoulder after the perceived injustice that took place after getting beat by William Byron in the closing laps at Homestead-Miami Speedway. Anger and spite can be motivating factors for any driver, but particularly for one who knows that the clock is ticking on his chance to claim a championship.

Davey Segal: I know it’s a cop out, but they all do. It’s too early to label one driver an overwhelming favorite. But I could give a slight edge to Sadler and Allgaier over Reddick due to experience. On the other hand, Reddick is the only driver with a win out of these three and has a championship team with him.

John Haverlin: If a JR Motorsports driver is going to win the XFINITY Series championship this year, it’s going to be Allgaier. Sadler will be a contender, but he doesn’t have what it takes to seal the deal. He hasn’t won a race since 2016, and has only led three laps in the last 10 races. That’s not a formula for a title. Reddick will be in the mix as well, but I haven’t seen enough from him to say he’ll win the title, either. Allgaier is in is his prime and is the best wheel man in my opinion.

Kevin Harvick and Tony Stewart went on a mini-rant concerning the distance the three national series have from local short track/grassroots racing. Harvick participated in the NASCAR K&N Pro Series West event at Kern County Raceway Park on Thursday evening. How can short track racing gain a bit of a resurgence within the sport?

Haverlin: Short track racing would have a resurgence if more of the regional events were televised live. NBC Sports tape-delays the K&N Pro Series and Modified Tour, and that isn’t good enough in this digital era. People want live events because if they can’t watch as it’s happening, they’ll probably see updates on social media. But I guess these races won’t be broadcasted live since the ratings wouldn’t do it justice.

Allaway: Drivers getting back to making appearances at short tracks couldn’t hurt. Seems like it never happens anymore. I don’t mean stuff like Harvick running K&N West at Kern County. I’m talking about appearing at places like Lebanon Valley, Outlaw Speedway, Mahoning Valley or whatever and doing celebrity races/autograph sessions.  There’s a long list of things that can be done, including getting off their high horses and not leaving the track within 30 minutes of the finish of the race.

Segal: This comes from somebody who watched a total of zero local short track races until the start of last summer but now covers the NASCAR K&N Pro Series for NASCAR Home Tracks: it’s not hard. Televise the races live on cable. Bring them to bigger tracks (like Phoenix), cross them over with any of the three national series events and have the sanctioning body actually market the series … but upon further review, it is a bit difficult. On paper, it seems easy. But the one common denominator is cash. If that isn’t flowing it, none of this will be possible.

Mike Neff: It’s all about money. Racers spend too much and don’t get enough in return. Local short tracks are doing everything they can to make money and pay decent purses but it is very hard to do. If they national organization pumped some money into it, or gave some of their national sponsorship money to the tracks it would certainly help. Having national touring series drivers compete at the local level certainly helps, too. The bottom line is the local short track level has to become a priority again, which stopped when Jim Hunter died, or it won’t grow much from where it currently is and will probably continue to decline.

Sure he can! Batty Matty is retired, is not 11 laps down at Martinsville with a few laps to go..Logano had a 4 PEAT in the bag..but IT SEEMS…mental illness or something like it had other plans…IMO. Maybe that is why or one of the reasons BATTY MATTY is unemployed at this time! Just saying, and imo!