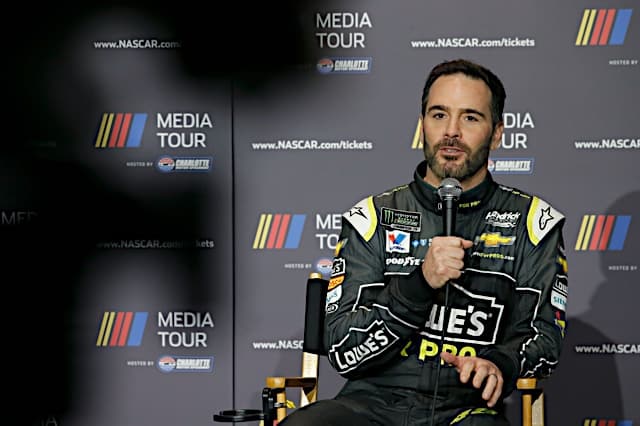 There was a time when a NASCAR driver was practically synonymous with his sponsor — that blue STP car was so recognizable as Richard Petty’s ride that “Petty Blue” is a color in every fan’s frame of reference.

Though Dale Earnhardt drove the Wrangler ride for several years, one look at that black GM Goodwrench Chevy meant the Intimidator, so much so that team and sponsor immediately changed the color of the car following Earnhardt’s death in 2001. There were a myriad of sponsors: Budweiser, Miller Beer, Tide, DuPont, Kellogg’s and plenty of others that bought space on the sides and hood of a racecar for the whole season.

Now, they’re all but gone.

Lowe’s, which has been Jimmie Johnson’s only Cup Series sponsor for 17 seasons, will step away from NASCAR after this season, and it’s actually one of the last full-time sponsors in the sport. It’s surprising that the company is cutting its NASCAR ties entirely, but would not have been at all surprising had it simply scaled back to a partial season. While there are a couple of hangers-on, like FedEx, the days of a single sponsor have been over for a long time.

There’s been a lot of talk this week about whether this is a sign of the times in NASCAR. To a degree, yes it is.

The trendiness of the sport has long since worn off, and the value to sponsors isn’t what it was two decades ago, when everyone wanted into the game. Ratings are falling and that means fewer people are seeing a company’s logo on television as the cars circle the track.

Even with Johnson’s recent performance woes, it’s hard to pin it on him. He’s a seven-time champion, and that brought Lowe’s a lot of airtime, which led to a lot of brand recognition. But there is a bigger picture here.  In those years that seem both not so distant and a lifetime ago as the sport was becoming the thing to talk about at the water cooler, everyone wanted in.

And teams could just about name their price.

Almost overnight, the dollars flew in.

The price to back a top team for a season skyrocketed nearly overnight; what was once a $10 to $15 million enterprise became $20 million and more for a single season.  Sponsors were willing to pay because the amount of exposure they could get was so valuable—people were packing the tracks, buying t-shirts and hats and any number of items with their name on it.  They were watching on television, and seeing a brand more than they would in a dozen commercial slots.

Times were good, and the money flowed.

But as the fad wore off, it was a different story.  Teams that could demand $20 million and more during the boom times found themselves in a tough spot, as the economy in general declined and few companies could afford that kind of money for advertising in a single venue.  Fans were drifting away, and regardless of the reasons for that, the result was less free advertising for sponsors in the form of souvenir sales. Fewer fans watching a race meant less exposure there, too.

Teams in the meanwhile, spent every penny, driving the cost of competition to match the high dollars rolling in. $10 million now might power a mid-level team at best, when once it was what the big teams were spending.  Even accounting for inflation, the cost to be competitive has ballooned to a point where it’s barely sustainable, and teams have nobody to blame but themselves.

To NASCAR’s credit, they’ve attempted to rein in costs, but compared to the amount the bigger teams are spending on state-of-the-art shop equipment, air guns and reused engines are drops in the bucket.

The manufacturers play a role here as well. Only the biggest teams have factory backing, which means dedicated personnel, additional wind tunnel time and more money.

That’s a good thing for the big teams, and even they need costs offset these days, but it hardly sets up a healthy competitive environment. Even with a technical alliance with a bigger team, smaller teams don’t enjoy the factory backing and those perks. That drives the wedge between the haves and the have-nots in deeper.

To sponsors, that makes even mid-level teams unattractive, and the same $10 million they might invest in a more competitive team isn’t worth it for one that will get little mention on television and few souvenir sales.

It may or may not be worth it to drop the $10 million on a big team for a third of the season — many sponsors have done just that. But the brand identity just isn’t the same as a full-season backer would enjoy, and a full season is too expensive.

It seems as though a lot more companies might be willing to back teams at a lower price point, which would make for a more competitive sport overall, but costs have been driven so high, teams would have to make deep, deep cuts to operate on half the money they do now, and well, the big teams aren’t at a point where they have to make those cuts.

Yes, the decline in sponsors, especially full-time backers, is a sign of the times, self-inflicted though it may be.  It may be this decline that eventually forces change, either by the teams or (more likely) NASCAR.  Don’t hit the panic button on the sport, and realize there’s a lot at play here. But teams should be sleeping with one eye open, because for their very survival, something’s gotta give.

Sorry Amy, I don’t recall how or see how NASCAR is “reigning in the costs”. NASCAR, you said…correct?

Less money means fewer teams. We are already seeing that. I have seen that at our local track too. There is no such thing as reigning in or cutting costs. That is a myth. Every time the sanctioning body talks cost cutting it ends up costing more. If a team has the money they will spend it no matter what. Racing even at the local level, is expensive that is just the way it is.

Thanks for finally pointing out what the real drivers of the costs are as well as the reluctance to fix it. The only point i disagree with is that nascar will in any way force change. While they may tinker around the edges, until its forced on them I cant see them doing anything.

NASCAR keeping most of the sports money has come home to roost and has starved the teams, even the big ones. The money at each event is split 65% to the track, which is generally ISC (France family) or Briton Smith’s SMI, 10% to NASCAR, leaving 25% to the teams. Most other “major” sports allocate 50-60% of the sports money to the participants. NASCAR kept the money, forced teams to find outside sponsors to fund their teams and the weakened product is now not worth outside sponsors keeping spending levels high.

NASCAR will be sold to a venture capital firm within 2-3 yrs and then major changes will happen. But the France family will still be rich with all the money they raked off the top.

I think it needs to be added that the coverage of races, compared to how it races were covered years ago has changed. There used to be coverage of the whole field; admittedly the back markers didn’t get as much as the guys in the front but you still would have seen Dave Marcis’s car a few times at least. Now the coverage is mostly of the cars in the front from multiple angles that change every five seconds. In my opinion the networks (and maybe NASCAR as well) are killing the sport as well by not covering all the cars in one way or another as who would want to sponsor a car that will never be seen by a camera (even though there are now what seems to be a million cameras at the track).

To look at it another way imagine watching a football game whose cameras focused on the quarter back 70% of the time and the rest of the field the remaining 30% of the time. How invested would you be as a football fan in that type of coverage and how long before viewership dropped off?

Comparing the coverage from 98′ or so to today on YouTube I would be hard pressed to say that the race coverage that we have today is actually better. I can state that the coverage from the booth was at superior then that it is now. Back then the guys in the booth knew that they were there to cover the race. Now you have the Waltrip’s that seem to think that everyone is tuning in to see them.

Fewer teams is coming. Lowes CEO took a pay cut last year while the company laid off 2,400 employees. Heck we all knew they were leaving when they didn’t sign a 3 year contract extension like Jimmie did. Jeff Gordon more or less said the same thing last night.

I don’t think NASCAR rebounds until the Frances sell it off, otherwise it will continue to shrink (30 teams is easy to see coming). NASCAR has outgrown them, wish they’d cash out and let someone else run the thing