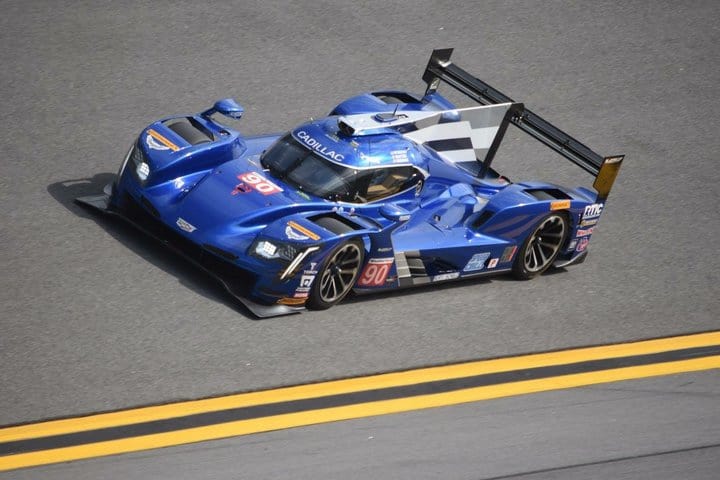 After much of the weekend had been dominated by Acura Team Penske, it will be the smallest of the Cadillac squads, Spirit of Daytona Racing, that will start Saturday’s Mobil 1 12 Hours of Sebring presented by Advance Auto Parts up front.  On Friday afternoon (March 16), Tristan Vautier won the pole for the 12-hour classic with a lap of 107.432 seconds (125.326 mph) around the 3.74-mile track.

For Vautier, this is his second consecutive class pole at Sebring.  Last year, he claimed the GT Daytona class pole for SunEnergy1 Racing.

Vautier’s lap was one-sixth of a second faster than Tequila Patron ESM’s Olivier Pla in second.  Despite turning in the fastest lap of the weekend earlier in the day, Ricky Taylor couldn’t back up that speed in warmer conditions.  The best he could muster was third, a third of a second off pole.

Pipo Derani will start fourth in the second Tequila Patron ESM Nissan, while Action Express Racing’s Felipe Nasr will start fifth.  The quickest of the two Mazdas was the No. 77 of René Rast, who qualified seventh.  The top 10 Prototypes all qualified within a second of Vautier.

Those top 10 Prototypes were all 10 of the DPi entries.  The fastest of the LMP2 cars was the JDC-Miller MotorSports No. 99 GAINSCO “Red Dragon” ORECA 07-Gibson driven by Stephen Simpson.  Simpson qualified 11th, 1.3 seconds off pole.

However, Simpson will move up a couple of spots on the grid due to both of the Mazdas having their times disallowed.  Mazda Team Joest was busted for taping over the seams on their RT24-Ps.  That’s a violation, so both Mazdas have been moved to the back of the Prototype class.

In GT Le Mans, the improved pace of the BMWs was clearly on display.  After being out in nowheresville for the entire Rolex 24 at Daytona weekend, BMW Team RLL’s Connor De Phillippi will start on the GTLM pole on Saturday.

GT Daytona will see Spirit of Race’s Daniel Serra start from the class pole after putting up the fastest GTD lap of the weekend.  Serra’s lap of 118.710 seconds (113.419 mph) was more than a half-second faster than Montaplast by Land-Motorsport’s Christopher Mies.  3GT Racing will start third and fourth with Jack Hawksworth getting the better of Dominik Baumann.  Finally, Paul Miller Racing’s Madison Snow will start fifth in the only Lamborghini on the grid.

Michael Shank Racing with Curb-Agajanian’s No. 93 Acura did not set a time in the session.  If the team can get the car repaired after Thursday’s crash, they will start the race at the rear of the field.

The Mobil 1 12 Hours of Sebring presented by Advance Auto Parts is scheduled to go green at 10:40 a.m. on Saturday.  Coverage starts at 10:30 a.m. on FOX Sports 1.  From there, it shifts between FOX Sports 2 and FOX Sports GO.  Our TV listings page has the full schedule for the race.