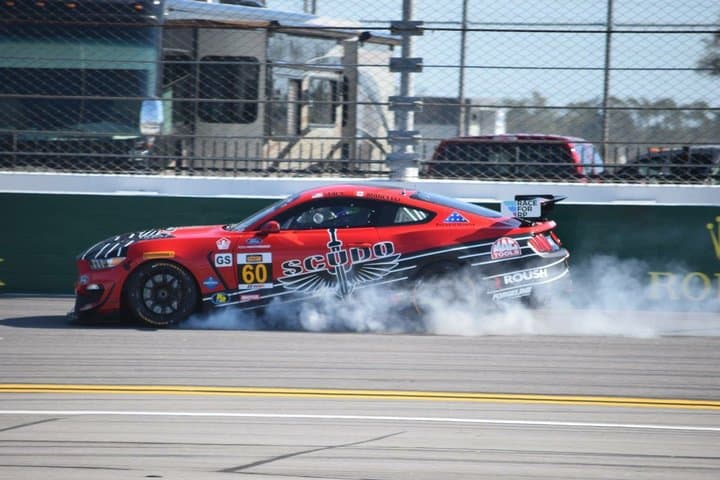 On Friday (March 16), KohR Motorsports’ No. 60 Ford Mustang GT4 shared by Kyle Marcelli and Nate Stacy took the overall victory in the Alan Jay Automotive Network 120 at Sebring.  It is the second consecutive year that the No. 60 team took the spoils.  Last year, it was Jade Buford and Scott Maxwell sharing the spoils.

“The team worked flawlessly,” Stacy stated after the race.  “We had a really good strategy, I’m really glad it worked out.  It was kind of a gutsy move, but it worked out in the end.  With these Continental Tires, it was just crazy good at the beginning.  I had a bit of a push toward the end there, but it got hot and sticky. It was great all around.”

Early on, the race saw a number of incidents and tire issues.  James Cox got loose and hit Jeff Mosing exiting turn 2, spinning both drivers out.  Cox was penalized, while Mosing broke a suspension part and was forced to retire.  Rodrigo Sales cut a left rear tire on his No. 74 Audi and had to pit out of second in TCR.  Finally, Winward Racing/HTP Motorsport’s Kris Wilson ran in the back of Bodymotion Racing’s Joe Robillard and put both drivers into the wall to bring out a full course caution.

Early on, Spencer Pumpelly took advantage of clean air to lead easily in the Rennsport One No. 28 Porsche.  However, despite the Rennsport One team having the best car, it was pit strategy that was the name of the game.

The majority of the field pitted during the aforementioned first yellow, but the strategy was all over the place.  Pumpelly pitted from the lead and exited in 13th.  Multimatic Motorsports’ Patrick Gallagher stayed out and took over the lead.  Gallagher’s lead was short-lived as Motorsport in Action’s Corey Fergus was able to snatch the advantage away before those who stayed out started pitting.

The second and final full course yellow flew shortly after the round of stops started.  Here, most of the drivers made their final stops.  However, KohR Motorsports’ No. 60 made their one and only stop on lap 22, 57 minutes in.  That put Marcelli in the lead with Stephen Cameron Racing’s Greg Liefooghe in second.  Rennsport One’s No. 28, which had regained the lead as the yellow flew, restarted in eighth with Dillon Machavern at the wheel.

For the rest of the race, those who stopped on the final yellow had to chase down those who did not.  Machavern had the fastest car on the track, but too much time to make up.

Second was Classic BMW’s No. 26 for Jayson Clunie and Toby Grahovec while Daytona winners Pumpelly and Machavern had to settle for third.  Stephen Cameron Racing’s Ari Balogh and Liefooghe finished fourth, while Carbahn Motorsports’ Tyler McQuarrie and Jeff Westphal rounded out the top five.

In TCR, Compass Racing’s Britt Casey Jr. and Tom Long dominated the race from the class pole.  It seemed like no one could really run with them for most of the day.

The only time in which the duo gave up the class lead was during rounds of pit stops.  In the closing laps of the race, Long had a comfortable 16 second lead.  All he had to do was coast to the finish.  However, the No. 77 Audi RS3 LMS Club Sport developed a fuel pickup issue.  With less than half a lap to go, the car acted as though it was out of fuel and ground to a halt.

Long’s trouble allowed Kuno Wittmer in the No. 74 Audi to sweep past and take the class victory.  With the two remaining Compass Racing Audis having issues, the lone Volkswagen GTI in the field shared by Luke and Tanner Rumburg finished second, nearly 19 seconds back.  The eEuroparts.com Racing Audi of Lee Carpentier and Kieron O’Rourke was third.  Long and Casey were credited with with.

In Street Tuner, MINI JCW Team’s Nate Norenberg started from the pole, but was passed early on by BimmerWorld Racing’s Nick Galante.  The goal was to duplicate their dominant run from Daytona.  Norenberg made sure that wasn’t going to happen.

On lap 5, Norenberg attempted to retake the lead in turn 5.  Contact was made, sending both cars off-course.  While both drivers continued, they dropped to the rear of the ST field.  Mike LaMarra in the No. 73 MINI took the class lead.  Norenberg was forced to serve a drive-through penalty for avoidable contact.

Galante still had pace in his pocket.  He was able to move back up to the front of the class with the help of the first full course yellow of the race.  However, BimmerWorld Racing’s pit crew was beaten out of the pits by MINI JCW Team’s No. 52 shared by Mark Pombo and Jared Salinsky.

While Devin Jones had issues in the BimmerWorld 328i that dropped him off the lead lap, Mark Pombo and Derek Jones were nose to tail for the final few laps.  In the end, Mark Pombo was just able to hold Derek Jones for the win.

For Salinsky, it is his first career class victory.  The margin of victory was just over a quarter of a second over Derek Jones and Mat Pombo.  Bodymotion Racing’s Max Faulkner and Jason Rabe were 27 seconds back in third.

The IMSA Continental Tire SportsCar Challenge takes over a month off as they won’t be traveling to Long Beach in April.  The third race of the season will be at Mid-Ohio Sports Car Course on May 5.  It will be the series’ first visit to the 2.25-mile road course since 2013.