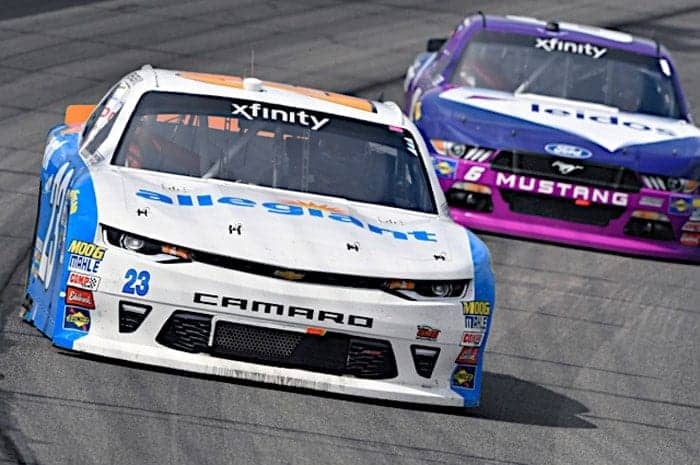 NASCAR announced Saturday morning (March 17) that any of the 24 Monster Energy NASCAR Cup Series teams that managed to set a time in Busch Pole Qualifying on Friday will be eligible to purchase an additional set of tires.  The move was made in response to the existing rule that drivers have to start the race on the tires they qualified on, and the fact that over one-third of the field failed to get through inspection in time.

There is a fairly distinct difference at Auto Club Speedway between a set of sticker tires and tires with laps on them  The two-mile D-shaped oval has the oldest pavement in the series, dating back to 1996 (the year before the track opened).

To maintain the tire allocation of 10 sets for the race, any team that takes advantage of the extra set of tires must surrender its qualifying set to NASCAR.  Anyone who actually failed to set a time would start the race on the tires that they would have qualified on.

In addition, a new penalty was added into the mix that will go into effect starting with Saturday’s Roseanne 300 at Auto Club Speedway.  XFINITY Series Managing Director Wayne Auton informed crew chiefs Saturday morning that anyone who fails to set a time in qualifying will not only have to start at the rear of the field, but they will also have to serve a drive-through penalty on the first green flag lap of the race.  The idea behind that rule is to give teams incentive to not push the envelope quite so far and get through inspection.

It is unclear as of this writing if this is a rule just for Saturday due to Friday’s circumstances, or if it will become permanent.

Not sure how I feel about this one. If the contraption they are using to measure everything is legit and accurate, then I like it. The teams are given tolerances, if they choose to push it to the edge of the limit then they get what they deserve. If the contraption isn’t accurate then the whole thing is a farce and stupid.
One thing is for sure, not passing inspection will definitely cost you now.

You don’t think with the current penalties, the wave around, and only 38 cars, that qualifying doesn’t mean anything……start in the back or one lap down, big deal. Might even be a cost savings.