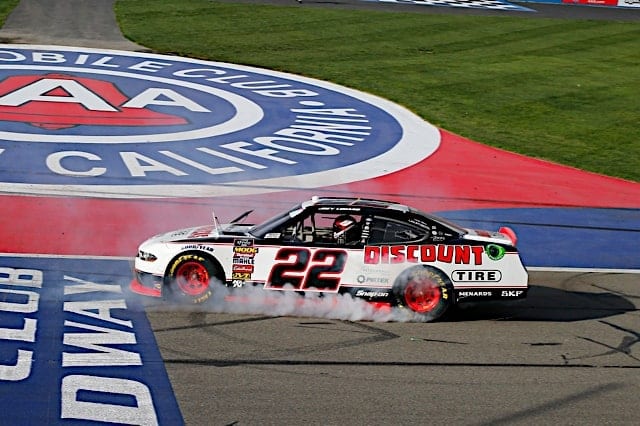 Five laps into Saturday’s Roseanne 300 at Auto Club Speedway, Joey Logano might as well have been handed the trophy.

Logano started second, but on lap 5 took the top spot, and never looked back, leading the next 126 laps, before a caution came out with 30 to go. While other teams had just pitted under the previous caution, Logano elected to stay out, forcing him to pit on this caution.

The No. 22 car restarted in 17th and was back in the lead after four laps, taking just two to crack the top three. He did have to hold off the field on a late race restart, but Logano was in a class of his own on Saturday.

“That just showed how fast our car was,” Logano said of being able to re-take the lead in four laps. “What an amazing car. I was the lucky one who got to drive it. I had a lot of fun out there.”

Justin Allgaier finished runner-up to the No. 22 car for the second consecutive week, while Elliott Sadler, Austin Dillon and Daniel Hemric made up the top five.

For the second consecutive season, JR Motorsports is proving it’s the best XFINITY Series team in the garage.

The team was able to flex its horsepower on Saturday, as Allgaier, Sadler and Tyler Reddick ran among the top five for much of the afternoon with the first two finishing inside the top five.

Prior to a caution coming out with 30 laps to go, it looked like Allgaier was in prime position to make a run at the victory as Logano was on old tires. Though the No. 22 team elected to pit, the No. 7 car shot to the front, leading two laps.

Coming down the wire, Allgaier and Sadler had an intense battle for the runner-up position, finishing best in class, as Logano was in his own zip code. When the checkered flag flew the No. 7 edged out the No. 1, though Sadler leaves the championship leader.

Early in the race, Reddick was the only car that could compete with Logano on restarts. At one point in the race, the No. 9 car dented in the rear bumper of Cole Custer, and side-drafted his alluded JRM teammates hard for running positions.

Hell, even Michael Annett, who has had an awful start to the year was running inside the top six, but on a restart with 46 laps to go was involved with an incident with Christopher Bell. Ultimately, the accident was Annett’s fault, as he slid up and put the No. 20 car in the wall, and around went Annett, as well. Annett finished the race in 18th.

As the XFINITY Series heads into its first off-weekend of 2018, JR Motorsports holds the top three position in the point standings, while Annett is stuck down in 14th, 33 markers behind the coveted 12th position. It’s clear that JRM is bound to have at least two, probably three teams battling for a championship in Miami eight months from now.

John Hunter Nemechek made his second career XFINITY start on Saturday, after placing fourth in his series debut at Atlanta Motor Speedway. However, the trip out west didn’t go as planned for the 20-year-old.

Nemechek started the 300-mile event from the third position and stayed inside the top 10 for the entirety of the opening stage, finishing seventh. But when the second stage began, he complained of a vibration — and it never went away.

With two laps remaining in Stage 2, Nemechek’s right front tire exploded going down the frontstretch from 17th position. The explosion was so bad, that it blew the entire hood up on the car and removed some of the sheet metal behind the right front tire.

Despite the blown tire, the Mike Shiplett led crew got the car repaired prior to the crash clock expiring, thus the No. 42 car ended the day in 29th, three laps down.

The start of the 2018 season is one that Dylan Lupton would like to forget.

Prior to Daytona, it was announced Lupton would be competing in at least 21 races for JGL Racing. However, right off the bat from the opening practice of the season, the No. 28 team has been a tad behind.

Lupton spun in the first XFINITY practice of the season at Daytona. The race? That didn’t go much better, as the No. 28 was pile driven into the outside wall during the third overtime.

The following week at Atlanta, Lupton finished three laps down in 21st, his best result through the first five events. In Sin City, the No. 28 team wrecked five laps in, resulting in a last-place finish. And at ISM Raceway, he finished 23rd.

On Saturday in Fontana, Lupton had one helluva day, starting off with a wreck during qualifying. Coming from the back, he raced his way inside the top 20, then the engine went south with 41 laps to go. The No. 28 car finished 33rd.

Through five races, he has an average finish of 28.8

After narrowly missing the playoffs in each of the last two seasons, Ross Chastain has gotten off to a hot start, picking up his second top-10 finish in the opening five races.

On this day, however, Chastain spent most of the afternoon inside the top 10, picking up stage points in the first stage and ended up 12th in the second stage. Through a handful of late cautions, the No. 4 team remained on the same pit strategy as most of the leaders, en route to a 10th-place finish.

With less funding than a lot of the teams in the garage, Chastain sits 13th in the championship standings, four points behind Kaz Grala for the playoff cutoff. It’s never too early to begin thinking about playoffs, even for small teams.

Overachieving in less than stellar equipment has given Chastain the opportunity to compete in the Cup Series for Premium Motorsports. He will make his fourth start of the season on Sunday, with a best effort of 27th last weekend in Phoenix.

For the first time in what seems like forever, there were only two Cup Series regulars in an XFINITY race, where the two series held events at the same venue on the same weekend.

Logano dominated the event, leading 139 of 150 laps, though had to earn the victory late in the race. With 30 laps to go, the No. 22 car pitted, while most the other front-runners stayed out, as they had just pitted four laps prior. Four laps after the restart Logano was back in front, where he led the remainder of the race.

For most of the opening two stages, Dillon was outside of the top 10, finishing 12th in the first stage, and eighth in the second. However, his veteran experience guided up the pylon, finishing fourth.

“If you break a car down into five points, the fourth and fifth points – to make the straightaway as long as possible, we just struggled.” – Ryan Preece

” We just weren’t great in traffic, I would get too far back and kind of get ourselves in a bind there with the aero and everything.” – Brandon Jones

Joey Logano was in his own league on Saturday, dominating the event, leading all but 11 circuits. Despite there was never really a battle for the lead, the racing at Auto Club Speedway was great.

Personally, I believe that races that involve tire wear are the best races on the circuit. Sure, that’s not always the case, as Kevin Harvick stunk up the XFINITY and Cup series at Atlanta last month, but overall, there is typically good racing throughout the field.

Clean air was everything, and once Logano was out front he was gone. Restarts were fun, at times five and six wide. In the end, Team Penske accomplished a first — winning its first XFINITY race at Auto Club Speedway.

The XFINITY Series has two weeks off before returning to the track at Texas Motor Speedway on April 7. Green flag for the My Bariatric Solutions 300 is set to fly shortly after 3 p.m. ET and Erik Jones is the defending race winner.

Another joke of a race stunk up by a cup driver. What is the point of this series when 4 out of the five races have been dominated by cup drivers and the Xfinity drivers are left to fight over 2nd on back. And B-rad K as another paid cheerleader/announcer, as if there weren’t already enough of them working for Fox

I can’t tell you how many times I sit down at the start of an Xfinity race intending to watch most of it and, after a few minutes of a cup driver leading, change the channel. Then I’ll check back a few times, see the same cup guy leading, and watch something else.
I don’t care what cup driver is dominating, I have no interest in watching it. What’s the point. One driver with the most experience, top notch equipment and personnel guaranteed by their cup affiliations, beat up on the wanna-bees.
NASCAR can do whatever they want with the series but I don’t have to watch it. Total waste of time watching a pro-level athlete beat up on lower level athletes.

You’re a better man than me. Not sure when I last watched a companion race.
These stories have to be the easiest to write. The only details that need to be filled in are the Cup driver, the number of laps they led, and the fake adversity they fought to win the race.

Fred
Reply to  Bill B

Nailed it Bill. Another joke of a “race “. I can’t imagine how these cup drivers even sense a bit of accomplishment by winning these races. But they do, they actually act like they did something really big. Look ma, I went down to the minor leagues and won!!!
And for the author, why don’t you list in the “bad” or “ugly” column the cup drivers stinking up the place? What a joke.

I used to watch the truck races, Busch races and the Cup Races every weekend but in the last ten years its slowly dwindled down to turning the Cup race on for a few minutes here and there and then changing the channel. Can’t stand the standard cars on the standard 1.5 mile tracks. Getting back to the Xfinity series; NASCAR has pretty much killed the fun of that series. Too many Cup Lite mega teams running over the smaller teams. When it was the Busch series (just to give a time reference) there would be many small teams that only had a handful of team members. Now, its just too expensive and NASCAR couldn’t care less if the series folds.