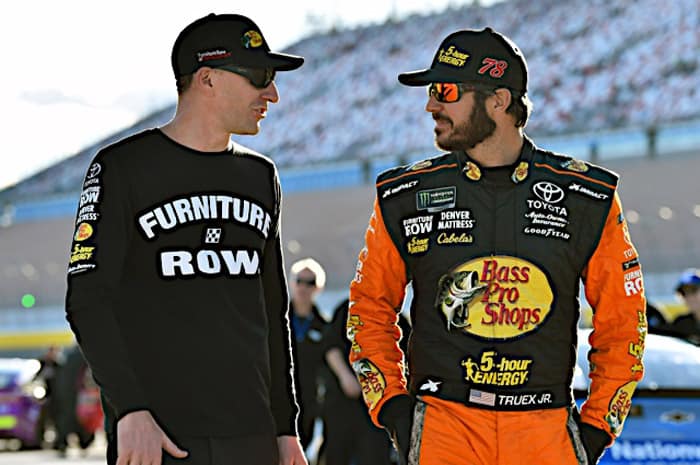 Kevin Harvick snatched the title of intermediate track king from Martin Truex Jr. to start the 2018 Monster Energy NASCAR Cup Series season. But it was Truex, not Harvick, who put on a clinic at Auto Club Speedway Sunday afternoon (March 18).

Leading 125 laps, Truex put a lock on his first victory of 2018 in Sunday’s Auto Club 400. He earned his 16th career win and first since last November at Homestead-Miami Speedway, the one that crowned him champion of the Cup Series. After earning his first stage victory of 2018, Truex swept all three of them, including the race win for the third time in his MENCS career.

“I knew we had a good racecar, honestly after the first adjustment of the race,” Truex said. “From there, it was just managing my tires and being smart.”

During the final green-flag pit stop, Kyle Busch beat the No. 78 off pit road, but a crew member for the No. 18 team made the wrong adjustment. It was only a matter of time before Truex made the pass for the lead, one of multiple times he recovered from poor stops.

“We had a little trouble getting beat out of the pits and that was tough,” he added. “We fell back to fifth [at one point], and we had to work our way back up front, and I really had to take care of my front tires. And once we had some clean air, it was unbelievable.”

Kyle Larson finished second followed by Kyle Busch. Busch was unavailable for comment after the race after a turn the wrong way with the wrench loosened up his race car down the stretch. Brad Keselowski, and Joey Logano from Team Penske rounded out the top-five finishers, both of whom crossed the line far behind the race winner. The margin of victory for Truex was an impressive 11.685 seconds; only 10 cars finished on the lead lap.

The race had begun with Truex on the pole but all eyes set on Harvick, seeking to earn his fourth straight MENCS victory. But on lap 39, Kevin Harvick’s hopes swept into the outside wall along with his No. 4 Busch Beer Ford Fusion.

Loose off turn 2, Harvick would make contact with Larson’s No. 42 in an attempt to side draft down the backstretch. The move backfired, sending him spinning and causing significant damage to both the right front and right rear. Harvick would continue but would finish the race 35th.

“I went down to side draft and he was coming up and we touched, and it just knocked the thing to the right and spun out,” Harvick said after the race. “Don’t know that it’s his fault.  I think that’s my fault for coming down the racetrack right there and trying to side draft and then, as we touched, it just came back up the racetrack.  I was just trying to get a little too much right there.”

Denny Hamlin finished sixth, followed by Erik Jones and Ryan Blaney. Jimmie Johnson, who scored his first top 10 of the season, ended up ninth, while Austin Dillon rounded out the top-10 finishers.

Trevor Bayne was the only driver to not finish the race on Sunday. Bayne made contact with Ryan Newman that ultimately resulted in a flat tire on the No. 6 Performance Plus Motor Oil Ford Fusion. His car smacked the outside wall hard resulting in the third caution of the afternoon.

Truex is the third driver to win this season, likely securing a spot in the NASCAR Playoffs. He also moved into the regular season point lead by nine points over Busch.