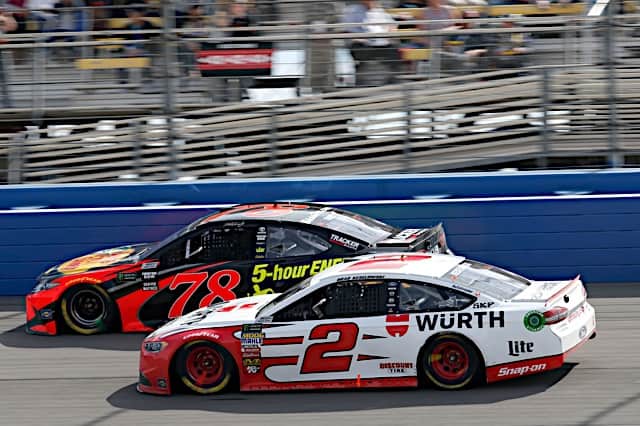 Kevin Harvick? Who’s that? The second his bid for four straight wins ended, slamming into the outside wall on lap 39, Sunday’s MENCS race was all about Martin Truex Jr. The No. 78 car took control the second the No. 4 took a back seat, outdueling Kyle Busch for his first win of 2018. Most importantly, Truex pulled a counterpunch just weeks after Harvick threw the first haymaker on intermediate tracks.

“To win early in the season I think is really important, for that momentum, that confidence as a team,” Truex said after cruising to victory by almost 12 seconds – leaving just 10 cars on the lead lap. “It just kind of reassures you what you’re doing is working and you can continue down that path.  It worked great for us last year. Hopefully, we can take advantage of it again.”

“This week was a step,” added Truex’s crew chief Cole Pearn. “This was the first week where coming to the racetrack I felt like everything was making a little more sense, we had a lot better plan going into the day. It was just a matter of getting those last little bits [in order].”

Their reward was a dominant victory at the type of track that earned Truex the title in 2017. Harvick’s crash made it impossible for both men to race heads-up but that opportunity will come soon enough. After Martinsville, the series heads to Texas Motor Speedway where Harvick slipped by the No. 78 in a thrilling late-race battle last November.

Who has the edge at this point? Truex, despite Harvick’s three wins has surged into the lead in NASCAR’s regular season standings and earned seven crucial playoff points. Add in Harvick’s penalty post-Vegas and suddenly, check the side-view mirror: the difference between these rivals is closer than it first appeared.

“After the beginning of the season there, watching Harvick run away with everything, I wasn’t sure where we were at,” Furniture Row Racing owner Barney Visser said. “I wish he would have not had the problems he had today and we could have run him again.  I think we had something for him today.  We won’t know for a few weeks here where we’re at.” – Tom Bowles

It took just five laps for another Cup driver to assert themselves up front in a NASCAR XFINITY Series event at Auto Club Speedway. Joey Logano captured the lead from pole sitter Christopher Bell and never looked back, leading 139 of the final 146 laps en route to Team Penske’s first victory at the two-mile oval.

While Logano set sail ahead of the pack, there was plenty of action for second on back in this race. A trio of JR Motorsports teammates swapped the second position along with Cole Custer and Bell. Clean air remains king in Fontana, but there were plenty of battles around the racetrack to please the viewer.

MASSIE: LOGANO DOMINATES OUT IN FONTANA

The series now heads into back-to-back off weekends with Elliott Sadler the championship leader by four points over Tyler Reddick. He’s also five ahead of Justin Allgaier — clearly, JRM came to play this season. Bell and Daniel Hemric round out the top five through the first five events of the season. – Dustin Albino

The 49th annual Amalie Motor Oil NHRA Gatornationals are officially complete and for a few drivers, it brought about a positive change in fortune.

Richie Crampton is no stranger to the Wally, having collected seven previously. But it’s his first at the wheel of a Kalitta Motorsports Top Fuel dragster and first at the Gatornationals. Crampton ran uncontested and posted a run at 3.854 seconds at 314.90 mph after first-time finalist Shawn Reed had to shut off his car on the starting line and was unable to make a run.

“This is probably one of my most rewarding wins ever,” said Crampton. “All I ever wanted to do was stand in the winner’s circle with Connie Kalitta. Not a lot of people have had that luxury and I’m not taking this one lightly.”

Crampton also got by Doug Kalitta, Mike Salinas and Antron Brown on his way to victory.

Funny Car featured an all Don Schumacher Racing final when teammates Fast Jack Beckman and Matt Hagan faced off. The win went to Beckman on a holeshot with a 4.035-second, 323.58 mph run to best Hagan’s 4.034 seconds at 322.04 mph. Beckman raced his way past Jim Campbell, Del Worsham and Shawn Langdon en route to the finals.

Hagan made the highlight reels in round two when he and Robert Hight both exploded the bodies off their cars just before the finish line. Hagan’s team had to thrash to rebuild and rebody his car in time to make the third round.

Pro Stock racer Tanner Gray had been experiencing the dreaded sophomore slump so far this year but turned things around with a run to the finals to face off against reigning class champion Bo Butner. Gray put down a solid 6.588-second, 210.18 mph run to beat Butner’s 6.605 seconds at 210.34 mph. Gray also got by Deric Kramer, Chris McGaha and Vincent Nobile in earlier rounds.

“We’ve been struggling since the beginning of the season,” said Gray. “Today was our first-round win of the season. It has definitely been a struggle, but I think it is starting to come around.”

The Vance & Hines Harley-Davidson team continue to dominate the field in Pro Stock Motorcycle, particularly in the person of reigning class champion Eddie Krawiec, who faced off against teammate Andrew Hines in the final.

It was Arana Jr. who made big headlines for the bikes in Gainesville, however, becoming the first rider to break the 200 mph barrier with a run of 200.23 mph on Friday. The new record earned him a $10,000 bonus as well as the first spot in the record books for breaking 200 mph on a Pro Stock Motorcycle. He proceeded to break his own record on Saturday with a pass at 201.01 mph. – Toni Montgomery

Tequila Patron ESM’s No. 22 for Pipo Derani, Nicolas Lapierre and Johannes van Overbeek claimed overall victory at Sebring Saturday. However, a number of contenders ran into engine problems once again.

Acura Team Penske’s No. 7 Acura ARX-05 was the class of the field for most of the weekend.  However, the car lasted just over half distance before an internal failure ended the day for Helio Castroneves, Graham Rahal and Ricky Taylor.  The No. 6 had similar issues but later on in the event.

The Cadillac switch to the new 5.5-liter V8 engine has been fraught with issues and they only continued in Sebring.  Three of the four Cadillac teams had to change engines prior to the race, which had to be disconcerting.  In particular, the motor continues to be prone to overheating.  IMSA allowed teams to install a new setup that allows them to quickly add water to the car in their pit.  In Daytona, though the need to add water forced Cadillac teams to head to the garage.

The new quick connect setup allowed Wayne Taylor Racing to finish second overall.  However, the team was adding water to the No. 10 Cadillac as early as the fourth hour.  Perhaps the temperature issues won’t be so bad in the sprint races (or, maybe the races won’t be long enough to require extra water).  Regardless, the overheating problems will continue to plague the Cadillac teams until a fix is discovered. – Phil Allaway