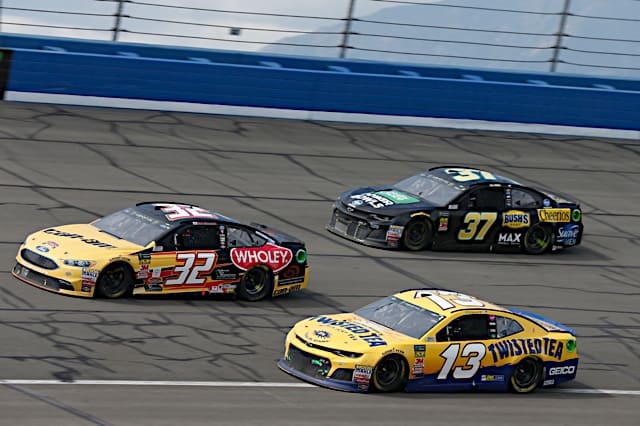 The stars came out Sunday at Auto Club Speedway. Rapper and actor Ice Cube made his debut as a NASCAR spectator, and the big crowd and mountainous backdrop were met with arm-warming weather by the thoughtful California sun.

Unfortunately, the nice memories for some ended as soon as the National Anthem did, as the Auto Club 400 was another tough one for the underdogs of the Monster Energy NASCAR Cup Series.

It could come expected at a track like Auto Club, one that packs a punch strong enough to throw many drivers off center. The super-fast 2-miler is the oldest playing ground of the year, with a racing surface more aged than any other in 2018.

What this leads to is excessive wear on virtually every part and piece on these racecars. For small teams, Fridays and Saturdays are particularly crucial when you realize how adaptable your car must be to endure bumps hard enough to rattle the cars silly at 210 mph into Turn 1.

Perhaps that’s why pre-qualifying inspection was as interesting as it was on Friday, as more than a dozen teams were thrown to the rear of the field after missing the entire session. This opened the door for drivers like Gray Gaulding and Jeffrey Earnhardt to secure career-best starts of 20th and 23rd.

Populating those spots didn’t last long, as the top contenders trained on by toward their runs from the back. The reality of the day then set in quick.

For the third time in five races this year, the Frontstretch “Underdog Performer of the Race” cracked the top 20. And for the second time, it was Darrell Wallace Jr. who held that honor.

The No. 43 Richard Petty Motorsports entry has been fairly quiet since their runner-up result in the Daytona 500. Obviously, that’s a high mark to maintain for a rookie driver and mid-pack team. The true sustainability of the new Chevrolet team has been lower on the results sheet since then with finishes of 32nd, 21st and 28th, respectively.

So, a 20th-place run on Sunday was slightly above their average thus far and will lead the team into the special grounds of Martinsville Speedway.

AJ Allmendinger was the next man in line, coming home 22nd. The No. 47 was the top underdog last week at ISM Raceway while JTG Daugherty Racing teammate Chris Buescher was No. 1 in Las Vegas. The camp once again contended atop the underdogs this week with Allmendinger’s decent showing.

Kasey Kahne has also gathered some attention this year for consistency, finishing 24th or better each week since Daytona. This time, he stayed out during the race’s final caution on lap 130 to lead the field to green. He may have gotten swamped in no time flat, but his single lap led was his first with Leavine Family Racing. He became just the fourth underdog to lead in 2018.

Considering this guy cut a tire to bring the last caution out, a top-25 may be a decent result. David Ragan ran into trouble, yet, was able to top his Front Row Motorsports teammate Michael McDowell by a position. Overall, 25th and 26th aren’t ideal but they did beat some teams worthy of contentment.

Those teams are Germain Racing, JTG and Go Fas Racing. These are all guys who have cracked the top 25 this year and they struggled more on Sunday. Ty Dillon has had a particularly tough start to the year in his No. 13, having a best finish of only 24th in five races. Sunday’s 27th continued that unfortunate run. Maybe a short track will shake that up a bit.

Chris Buescher had another difficult day, finishing 30th. Outside a fifth at Daytona and 15th at Vegas, this has been where he’s been running. More than just one step behind teammate Allmendinger.

Another was Matt DiBenedetto, who started 18th, his best start since New Hampshire last July. But the day went south when he suffered two cut right front tires in the final stage of the day, dropping them back to 31st spot. It tied his worst finish of 2018.

Cole Whitt, oddly, finished 28th for the third time in three starts this season. The veteran has been able to bring the car home clean while Corey Lajoie, out of his control, has suffered two engine failures in the other two races.

Ross Chastain has been seeing more and more Cup racing this year, starting his fourth straight race for Premium Motorsports. Missing out on qualifying, Chastain jumped from 36th to finish 29th, two spots worse than last week at ISM.

Gaulding started higher than ever before in his Cup career (20th) but fell off quick in his BK Racing No. 23. He finished six laps down in 32nd while Timmy Hill, Reed Sorenson finish behind. Sorenson made his first start of the year for Premium in 34th while Jeffrey Earnhardt finished his last race for StarCom Racing in 36th.

The XFINITY Series was first up this weekend for Saturday’s Roseanne 300. And though the races lap-to-lap operations were owned by Joey Logano, there were a few good underdog performances further behind.

Ross Chastain ran double duty again this year and it paid off in Auto Club. He and his JD Motorsports team brought home a top-10 finish in 10th. The result was already the third for the team this year and their first non-plate top 10 since Iowa last summer.

Also, a shoutout to Joey Gase and Go Green Racing, who came home 16th. The result was Gase’s best non-plate finish ever in eight years of XFINITY racing.

After 3 straight weeks of staying on the road I am so ready to get home to see my girls! Had such a great time racing and spending times with friends but I can’t wait to see these 2 again! pic.twitter.com/NHK1I1cxO8

The fight it’s what makes you stronger and makes you appreciate the good times! #nascar