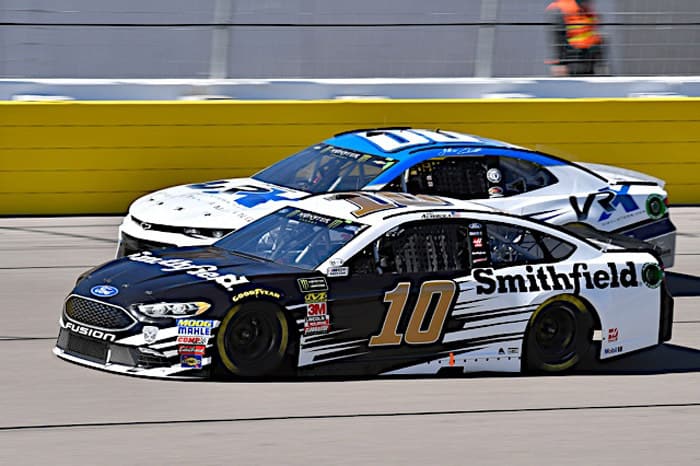 Kevin Harvick’s three wins in a row have captured the attention of the NASCAR world in the last few weeks, and he was in the headlines again at Auto Club Speedway.  But this time, it was following contact with Kyle Larson that triggered an odd accident. It left Harvick and Stewart-Haas Racing with a crumpled car and a 35th–place end result.

Fortunately for SHR, Harvick’s teammates have not been far behind the No. 4 car.  Through the first five Monster Energy NASCAR Cup Series races of 2018, Clint Bowyer, Aric Almirola and Kurt Busch find themselves 10th, 11th and 12th on NASCAR’s playoff grid.  SHR has never placed four cars in the postseason, and the team’s strong start suggests 2018 could be its best season ever.  In fact, how the whole team performs this year could answer some important questions about the organization’s future.

Piloting the No. 14 car for a second season, Bowyer is not in uncharted territory.  After placing third in last year’s race at Fontana, he remained a consistently good performer throughout the early part of the season.  An average finish of 15.5 was his best since 2013, and Bowyer is currently bettering that number this year (10.6).  If momentum from the beginning of the season can be sustained, he could have a big year.

Meanwhile, Almirola may be the most pleasant surprise of 2018.  A change of scenery has helped him earn five top-15 finishes to start the season.  Perhaps more impressive is Almirola’s attitude and confidence. Last month, he was about a mile away from winning the Daytona 500 before getting spun out of the lead by Austin Dillon. He had every right be furious about that incident, but Almirola chalked the crash up to hard racing and has held his head high ever since.  Hopefully, the veteran’s first season with SHR will be remembered for more than a heartbreaking loss in the Great American Race.

Busch had his own share of misfortune in Daytona, getting collected in a late crash after running well throughout the afternoon.  Yet he bounced back quite nicely at Atlanta Motor Speedway, finishing eighth and leading 52 laps. That’s the most he had led at an intermediate track race in the last two years.  Another crash at Las Vegas Motor Speedway kept Busch from winning at his home track but thus far, he and new crew chief Billy Scott have meshed well.

That is the good news for the other three drivers at Stewart-Haas Racing.  The bad news is that they all share the same problem, one that Harvick clearly does not have.  Neither Bowyer, Almirola or Busch have won in quite a while.

Busch’s most recent victory is the 2017 Daytona 500, leaving him winless in the last 40 races.  For Almirola and Bowyer, the drought is much longer.  Almirola’s lone win at NASCAR’s highest level was in the 400-mile Daytona race in 2014.  Bowyer, meanwhile has not scored a points-paying victory since winning at Charlotte Motor Speedway in October 2012.  All three drivers must be feeling the pressure to reach Victory Lane, especially with Harvick’s success. But all three have the ability to capitalize on SHR’s great start to the season.

Almirola is the new guy at Stewart-Haas Racing and lacks the resumes of Busch or Bowyer. However, he may be feeling the least pressure of them all.  In moving to SHR, Almirola brought Smithfield, his sponsor at Richard Petty Motorsports since 2012.  The SHR-Smithfield union alleviated financial questions about the No. 10 car. Early returns also suggest that Almirola will be a top-10 contender on a more regular basis than Danica Patrick ever was.  Given Smithfield’s loyalty to Almirola and the previous struggles of the No. 10 team, the Tampa native will have time to prove whether he can be a long-term solution at SHR.

Bowyer has had to deal with sponsorship issues of his own.  In 2017, his Ford had no other major backer besides Haas Automation in 19 of 36 races.  Moreover, despite his improvement over recent seasons, it is clear a lack of wins kept Bowyer out of the playoffs.  After Richmond in September, the Kansas native was a respectable 11th in the season-long points standings. However, there were six drivers below him in points who got priority in terms of playoff qualifications via wins. The end result left Bowyer as the first driver on the outside looking in.

In 2018, Haas has covered only two of the first five races for Bowyer. But with a lack of major news surrounding the No. 14 car, his sponsorship commitments remain uncertain.  Bowyer’s driver contract also expires at the end of the season. That means a win and postseason bid works to Bowyer’s advantage as his sponsorship search continues, not to mention contract negotiations.

Speaking of contracts, SHR caused a minor stir in 2017 by not renewing Busch’s.  The team immediately stated they wanted to keep him; however, negotiations dragged all the way to December and resulted in just a one-year deal. Speculation remains Busch had to take a pay cut simply to stay in the No. 41 car short-term.  Complicating matters is that Busch’s primary sponsorship, outside of Haas, comes from Monster Energy, which sponsors the No. 41 and NASCAR’s top series.  Within the next year, Monster must decide if it wants to continue its relationship with NASCAR. That decision will likely impact the funds Monster wishes to direct to Busch’s team.

As a result, there remains a fair chance SHR’s 2019 lineup might not include Busch.  The writing is on the wall with young Cole Custer. The son of SHR’s Joe Custer will be racing for them in the Cup Series sooner or later, perhaps next year if Custer is a cheaper option for the team if Monster drops its support of the No. 41 car.  Seeing Busch leave SHR under those circumstances would be a real shame, especially with few quality seats available.  Busch does turn 40 later this year, but as a Daytona 500 winner, a veteran racer and former champion, he deserves to end his career on his terms.  Of course, a championship, longevity, and Daytona 500 victories did not do Matt Kenseth any favors when Erik Jones came knocking at Joe Gibbs Racing’s door.

Or maybe Bowyer in is more danger of losing his place at SHR?  He is only one year younger than Busch. Like his teammate, Bowyer’s future in NASCAR should not hang in the balance based on his age alone.  But what if he misses the playoffs and gets shut out of Victory Lane again?  What if Monster declines to sponsor the Cup Series beyond 2018 but directs more money to Busch?  If Bowyer does not have wins, sponsorship or status as a past champion to fall back on, he could be the one replaced by Custer.

For all the good vibes that SHR must be feeling these days, the 2018 season is sure to bring competition to the team itself.  Almirola, Busch and Bowyer not only need to win for themselves but to secure their futures with the team over the next few years.

The potential for another offseason of changes at SHR will make the organization one of the most fascinating to watch this year.

“SHR has never placed four cars in the postseason”

Just sittin’ here wondering why that is….

Yep, their engineers have found the magic trick over the winter. But the others will catch up.

NASCAR never came with a playoff system that included 40 drivers?