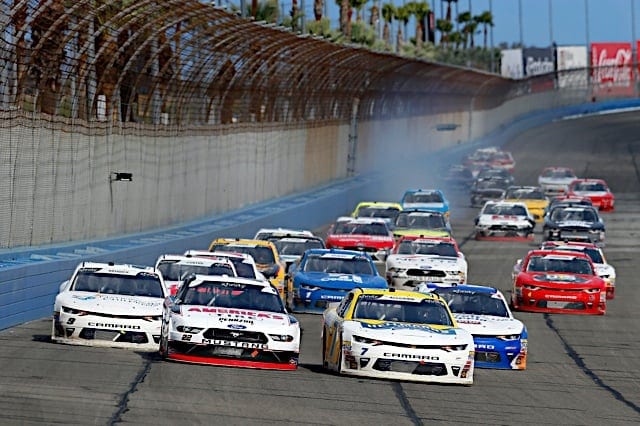 Still not receiving the Frontstretch Newsletter? Click here for your chance to sign up for a FREE subscription that gives you exclusive Monday through Friday content. Here’s a preview of what you’re missing with one of our weekly Newsletter writers, Mark Howell.

Given that spring has finally sprung, it’s time to think about traveling.

But while most folks around here are contemplating spring break trips next week to warm and sunny locales, I’m looking to utilize mine as a work-from-home staycation.

For me, it’s conference season.

Usually, my spring holidays are spent presenting my latest research findings at the national Popular Culture Association conference. This year’s proceedings are being held in Indianapolis, and there’s been talk about a possible outing of sports panel participants to visit the famed speedway and its well-known museum. Such side trips are always fun as they tend to put major sports venues into some sort of realistic context. Past PCA conference outings have included a behind-the-scenes tour of Fenway Park while visiting Boston and a Chicago Cubs baseball game at Wrigley Field during our last trip to the Windy City.

This year’s conference appears to be headed for the Brickyard.

A small gathering of racing and/or automobile historians will venture out to the track for an afternoon immersion into “The Greatest Spectacle in Motorsports.” While the details haven’t been firmed up yet, behind-the-scenes visits to both the Indianapolis Motor Speedway and the museum look to be on the docket.

Just not on MY schedule.

Instead, my own conference schedule this spring will take me to the Hoosier State, but not to the PCA national gathering. Come the end of April, I will be headed to Indiana University in Bloomington to take part in a “motorsports and emerging energy technologies” panel at the 2018 Summit of the International Association for Communication and Sport.

It all started with an email from Belgium.

A doctoral student at the University of Antwerp contacted me last fall and inquired about any interest I might have in speaking at the IACS Summit. He knew of my work with NASCAR, and he hoped to include a stock car racing perspective in a panel discussion about how hybrid and/or electric vehicles were changing the face of motorsports. While hybrid vehicles are fast becoming part of every manufacturer’s product line, fully-electric cars are grabbing headlines. Formula Electric competition is gaining a global audience of fans, but it was obvious that NASCAR showed little interest in jumping aboard the E-train.

Given that NASCAR still races two-door, rear-wheel drive cars and only adopted electronic fuel injection in 2012, there didn’t appear to be any hybrids or electric cars on any entry lists anytime soon.

And the IACS was looking to me to address such American-made reluctance.

I’ve given lectures about NASCAR’s love/hate relationship with the environment before. For every tree that’s planted as part of the NASCAR Green initiative, there are still metric tons of carbon emissions spewed into the atmosphere. Even though today’s NASCAR engines are more fuel efficient than ever, they are still of the internal combustion variety.

But that’s just the way of NASCAR.

One of the central points I plan to make is that NASCAR, unlike other forms of motorsports, has never been touted as a developmental series. While Formula E race cars feature the most cutting-edge innovations in aerodynamics, batteries and motor configurations NASCAR continues to maintain its rather traditional nature of running what you brung. The initial vision of Bill France for his Strictly Stock division back in 1947 was to race cars you could find on showroom floors.

France’s idea was to pull the hubcaps, put masking tape over the headlights and mash the gas. You could drive home if anything made it to the checkered flag. NASCAR competition was all about existing technologies commonly available to the general public, and that continues to be the philosophy today. Granted, stock cars haven’t been “stock” since the 1960s or thereabouts, but the general concept remained the same. What you see is what you most-readily recognize. That’s why even though you can find a Toyota Camry Hybrid at your local dealership, you won’t see Martin Truex Jr. wheeling one at Martinsville this weekend.

In other words, change in NASCAR comes at a glacial pace.

But that’s not to say the sanctioning body is averse to new technologies. As I stated earlier, we’ve run EFI since 2012 and developments in engine block construction (currently done using compacted graphitic iron) have, according to Dr. Diandra Leslie-Pelecky at BuildingSpeed.org, made NASCAR motors more efficient than their mass production counterparts. Even the oft-maligned Car of Tomorrow helped improve NASCAR by bringing advances in heat dispersion and side-impact safety to today’s construction methods.

The biggest hindrance to NASCAR going electric is perhaps confusion over basic terminology. While hybrid cars are becoming more common, fully-electric cars are still something of an oddity. For every high-dollar, high-tech electric concept car, there are hundreds of thousands of gas-powered grocery-getters. If “Big Bill” wanted to showcase production-caliber automobiles in competition, then – in a large way – we’re there. But until hybrids become ho-hum, and until we see charging stations instead of gas stations, NASCAR will put Sunoco ahead of sunshine.

And that’s yet another element to consider. The intent of NASCAR since day one has been to promote manufacturers and the products they produce. An old slogan used to market NASCAR was “We Move Products,” and that thinking is alive and well today. It’s challenging to promote products that the minority of consumers actually own. So while the hybrid market is growing, and the all-electric market is slowly emerging, NASCAR circa 2018 will remain fossil-fueled for the foreseeable future.

Now, to explain such thinking to my audience in Bloomington….

Beth, a friend of mine in the UK have a blog, Facebook page, etc. called “Velocity Kinetics” devoted to just what your doctoral student mentioned. The accelerating introduction of alternative fueled vehicles into motorsports.
An area where all the major European manufacturers are racing as quickly as they can to get involved. Not just in Formula E, although perhaps that is the most visible, but Formula 1 and street cars up to and including Porsche and Ferrari.

So I wonder how long, given the dependence nascar and its teams, as dependent on manufacturer money as they are will be able to avoid this trend? Certainly they will be forced by monetary issues to change at some point.g