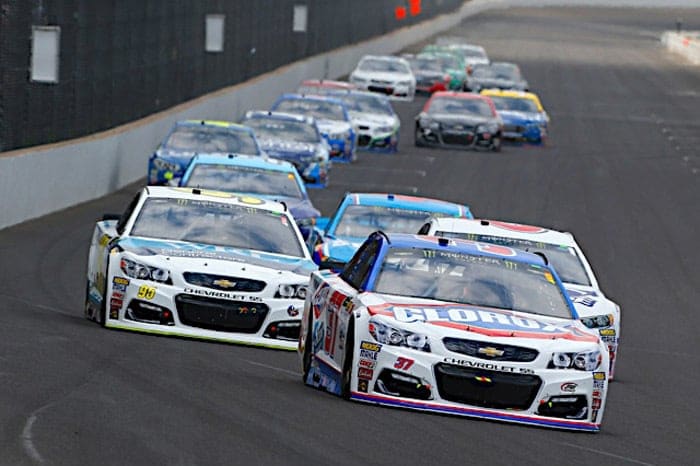 At the end of every day, when all is said and done, an inspection failure is on the team.  NASCAR took a lot of flack last weekend when 13 cars failed to make it through pre-qualifying tech at Fontana, but it’s not the sanctioning body’s responsibility to make sure teams make it through. Teams bringing cars that were easily within all tolerances passed inspection.

Does that mean teams that struggled with the process were deliberately cheating?  Not at all.  The implication that all 13 cars that failed at Fontana were overtly flaunting the rules is just not realistic. Were they pushing boundaries? Absolutely.

Taking a car to its limits means that, especially on a rough track like Auto Club Speedway, a car that came to the track within tolerances can be adjusted out by the surface. That’s a world away,  from things like the fake fuel filler that makes the fuel cell appear full for qualifying, adjustable rear windows, cars that are way off on heights or templates after a race not due to a crash or part failure.

It’s unlikely that most of last week’s failures were the result of deliberate cheating.  Pushing the limits, absolutely; that’s what crews are paid to do.  But at the end of the day, no matter how many teams push those limits, if they can’t pass inspection, you don’t get to blame NASCAR.

While individual teams failing tech inspection is not NASCAR’s fault, it is the sanctioning body’s long-term burden to bear, because fans don’t like it if they buy tickets to see qualifying and then don’t see their favorite driver make a run.

NASCAR, to give credit where it’s deserved, is trying to solve the issue. A rule change for the XFINITY Series last week adds a pass-through penalty that will cost teams at least a lap at most tracks – with the possible exclusion of Pocono – and gives teams added incentive to present a legal car for inspection.

Another change condenses post-qualifying and pre-race inspections into a single process, which doesn’t address the qualifying issues of last week, nor was it clear if the new rule means the cars will be impounded after the lone inspection after qualifying. If they’re not, it seems like an open invitation to push the limits into the grey area for the races, as long as the tweaks can be reversed prior to post-race inspection if the car wins.

It’s admirable that NASCAR is taking steps to streamline the process and to discourage teams from stepping off the straight and narrow, but it remains to be seen whether the measures work as advertised. The sanctioning body says the goal is to have one major inspection per weekend, which seems much too far in the opposite direction. Fans want to know their driver won in or got beaten by a legal car, and that includes both qualifying and race trim.

Another piece here is the corner NASCAR has painted teams and itself into.  It’s not about the minuscule tolerances per se because if you have a rule you also need a hard line on how far teams can push it.  That’s absolutely fine; after a point, it no longer matters if the car was a hundredth of an inch too low or two inches off because the rules are definitive. That’s good, and again, compliance is on teams and nobody else.

However, there’s a good argument for opening up some areas for teams to work in. Not bodies and engines, as there needs to be some parity in those major areas, but in things like suspensions and gear ratios, there should be a lot more choice. If the car meets height requirements after the race, they should be able to choose spring rates and shock compressions. If a team wants to add speed but risk durability with its gear selection, more power to them. Teams should be able to find their own advantages in these mechanical areas. If NASCAR is going to require measurements in thousandths of inches, teams should have some freedom in how they get there.

It was interesting to see that a large number of fans were upset with NASCAR when so many teams failed inspection last week. It seems like there’s a growing tendency to blame the sanctioning body for anything and everything. In fact, negativity is almost like a fad these days, as though it’s cool to bag on NASCAR.  It isn’t that there is nothing to complain about, but in this case, maybe a step back is in order.

The other factor in fans’ position has to do with their favorite drivers. Fans are intensely loyal to their chosen favorites, which is one of the things that makes the fan base strong. But at some point, it becomes an issue if fans are vocal about something one week but making excuses the next if it’s their guy. If NASCAR is to listen to fans and make changes accordingly, how does it handle this situation? If fans are calling for cheaters’ heads on a platter one week and blaming NASCAR for the issues the next, how is the sanctioning body supposed to react?

In this case, a united front might bring meaningful discussion and change.

The real question is not whether the inspection issues at Fontana were handled correctly, but if the new rules NASCAR has put in place are enough, and if they’re not, what else needs to be done. The pass-through penalty for failing to make qualifying is a step in the right direction; reducing the number of inspections not so much. It opens windows, yes, but not the right ones.

If NASCAR must eliminate an inspection, why not do away with the pre-qualifying one, which is the one most teams seem to struggle with? Teams have to pass a full inspection to get on track for practice already, so why not let them qualify what they practiced, with the caveat that if they fail post-qualifying inspection, their time will be tossed out. And instead of a pass-through, how about a hold of two to five laps at the start of the race? Sending them home might actually be the better method, but there are some big implications there, namely with sponsors who are paying for their cars to be on track Sunday. If a decision is made to drop a team over a missed race, that becomes a penalty gone too far.

Another area where NASCAR has missed the boat is its refusal to strip a win from a team whose car is found to be in violation after the fact. The claim that fans should know the winner when they leave the track is, at best, outdated and at worst an insult to fans’ intelligence. Most fans want to know that the guy who won the race did so fairly, and would likely be willing to accept it if the win was stripped on Tuesday after a complete tear-down and given to the next finisher, provided his car was in compliance. Unless, of course, it’s their guy….

NASCAR’s stand is admirable, but it’s important to take the right steps, and it doesn’t quite feel like that’s happened here. A long, hard look at the rules as well as how they’re enforced is in order, and it would only make the sport stronger and more competitive.

Nothing will change, NASCAR chooses what to enforce, what not to enforce. Who to punish, who not to punish. A lost cause for some time now. Not “new” bashing..just repeating the facts over and over. The truth is a brutal bitch.

When Brian dictates his autobiography (we al know he will) he should call it Brian In Blunderland.

I agree that suspension and gear ratios should be put back into the teams hands. I would also put the rear spoiler angle and height into the teams hands The spoiler rules go back to the T-bird/Lumina days and there is no need for it today since the whole body is custom designed and approved by NASCAR.

I think it is amazing that some people still believe NASCAR can save itself by implementing MORE RULES! Auto racing should be the simplest sport in the universe. Cars drive around in circles for a specified number of laps and the first car to finish those laps wins. Easy-peasy. Forget the points, the playoffs, the stages, the Lucky Dogs, the Wave Arounds, the laser inspections. But NASCAR will keep diggings its own grave with a new set of rules each week while the fans continue to slip away.

These columns are always good for a laugh.

And how awesome is Villanova?!

We are now at a point where NASCAR comes to the track with testing equipment which is out of reach for many teams and yet the teams are expected to stay within those minute tolerances. Not that long ago when there were templates which every team had a set of there were few infractions. Like the high speed cameras that watch the pit, yes teams get penalized if a crew member has a toe on the ground too soon. Previous you had humans watching humans and yes some things were missed but if they were honest and fair everything balanced.

Bruce let me point out that is the teams not nascar that is causing this problem. Nobody makes the teams get anywhere close to the tolerances. Do they do it to try to gain an advantage? Absolutely. But they don’t have to do it. Nor to they have to spend the large amount of money to get the equipment to measure how close to the edge they are coming. They do it because they want to.

I suppose my point is, with all the things we can complain of about nascar, we shouldn’t give the teams a pass on stuff they do deliberately.