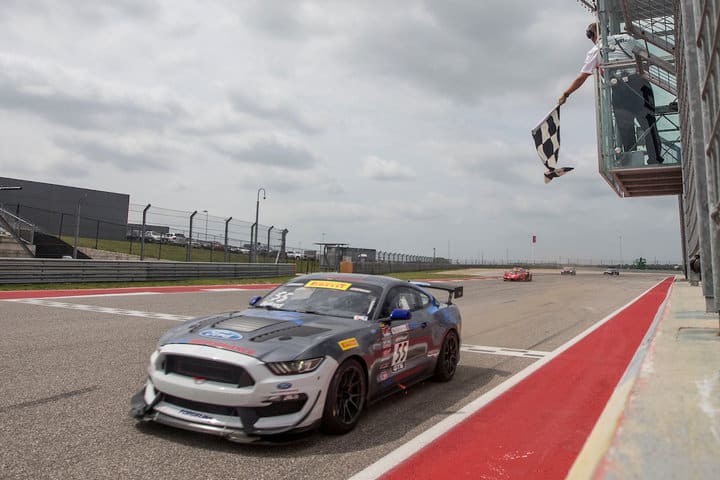 On Saturday afternoon, PF Racing’s Jade Buford and Scott Maxwell jumped pole sitter Harry Gottsacker during the race’s round of pit stops.  From there, they were able to hold off the rest of the field to claim the first victory in Pirelli World Challenge for the Ford Mustang GT4.

“[The win] feels pretty good.  We earned that one for sure,” Buford said on pit road after the race.  “Some of the cars have outright pace on us, but we just executed the perfect race.  We knew that consistency was going to be our strength and we executed to that end.”

Racers Edge Motorsports’ Gottsacker started from the pole and led easily in his SIN R1 GT4.  Meanwhile, the rest of the pack simply couldn’t get started.  On the initial start, Flying Lizard Motorsports’ Mike Hedlund was squeezed into the pit wall by Epic Motorsports’ Randy Mueller.  Both cars were significantly damaged and were done for the day.

On the restart, Team Panoz Racing’s Matt Keegan was spun out in turn 1.  The car came to rest in the middle of the track.  While others stacked up trying to avoid Keegan, GMG Racing’s Elias Sabo came on the scene unsighted and hit Keegan head-on.

Both cars were heavily damaged and a second full course caution flew.  As a result, almost all of the first 22 minutes of the race were under yellow.

In SprintX races, the pits are only open for a 10 minute window under green.  Due to the wrecks, the window opened at the end of the first lap under green after the second crash.

Gottsacker seemed to have the best car, but badly mistimed the stop.  Running alone in the event, Gottsacker did have to carry extra weight.  However, he did not have to stay in the pit lane any longer than anyone else.  The message was not relayed clearly to Gottsacker.  The New Braunfels, Tex. native spent quite a bit more time in the pits than necessary and came out of the pits in eighth.

As a result of the bad stop, Maxwell ended up with a decent lead.  Gottsacker charged his way through the field, running laps up to 1.5 seconds faster than anyone else.  Unfortunately, Gottsacker ran out of time.

Even with the massive deficit after the stops, Gottsacker still got back to second, 1.277 seconds behind.  Third went to Blackdog Speed Shop’s No. 11 Chevrolet Camaro GT4.R for Michael Cooper and Tony Gaples.  Fourth went to GMG Racing’s James Sofronas and Alex Welch, while fifth in class (sixth overall) went to ST Racing’s Samantha Tan and Nick Wittmer.  Wittmer turned the fastest lap of the race in the No. 38 BMW M4 GT4 and will start Race No. 2 on pole Sunday.

In the Amateur division, single-driver efforts were a lot more common.  The best driver in that group all day was Ian Lacy Racing’s Drew Staveley.  Staveley kept himself right up with the Pro-Am leaders for the whole race, eventually bringing his Ginetta G55 GT4 home in fifth overall to take the class win.

Staveley’s winning margin was 22.915 seconds over a fierce battle for second.  ST Racing’s No. 36 BMW for Al Carter and Aurora Straus just edged out the Stephen Cameron Racing BMW of Henry Schmitt and Greg Liefooghe.  Fast Track Racing/Classic BMW’s Toby Grahovec and Chris Ohmacht came out of the pits after their stop in third overall.  Unfortunately, they faded all the way back to fourth in the Amateur class, 15th overall.  Team Panoz Racing’s Dr. Preston Calvert was fifth in class.

GTS SprintX Race No. 2 is set to begin at 11:15 a.m. on Sunday.  The race will be livestreamed at World-Challenge.com.