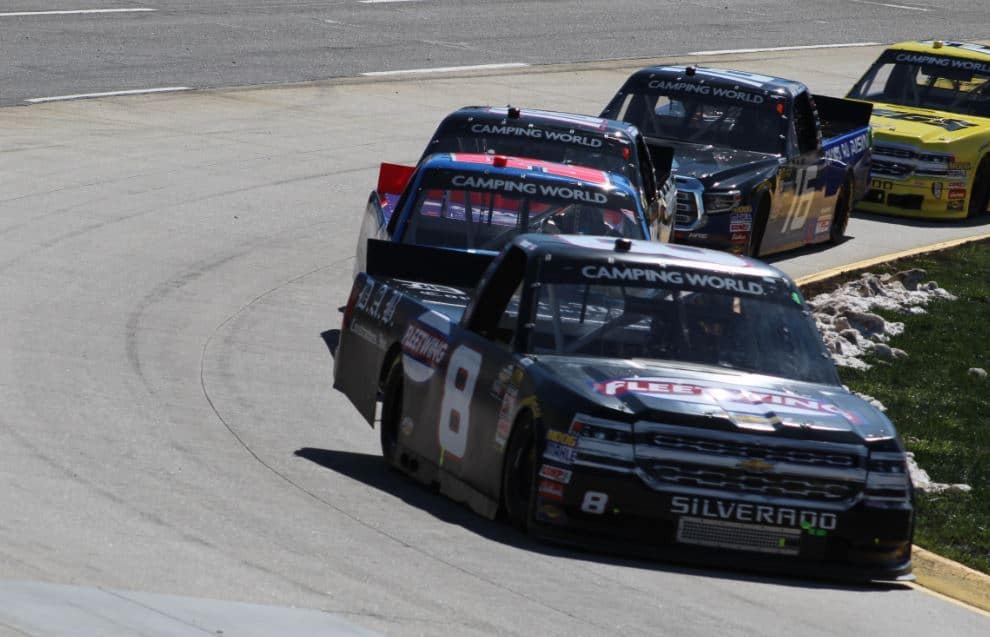 John Hunter Nemechek held off Kyle Benjamin to score his sixth career victory in the Truck Series, marking the the fourth consecutive year in which Nemechek has grabbed a victory in the series.

Ben Rhodes was the winner of the first two stages of the event, but he only managed a 12th-place finish when the checkered flag flew following pit road issues after the end of stage two.

The first 23 laps were run on Saturday (March 24), but the snow came and resulted in the postponement of the race. The snow lasted until Sunday morning so the race was pushed to Monday. Rhodes led the first 25 laps and then surrendered it to Matt Crafton. Rhodes regained the lead on lap 30 and held it through the end of stage one.

Stewart Friesen took two tires during the caution between stages, but it did not pay off; Johnny Sauter made contact with Friesen in Turn 1 on lap 82, with a little help from Todd Gilliland, and spun Friesen out. Rhodes led the vast majority of the second stage and scored the points in that stage as well.

The final stage saw Benjamin grab the point on pit strategy, and he led for 74 laps before Nemechek went three-wide on the seventh restart of the race and grabbed the lead, while Benjamin got into Gilliland and caused both of them to relinquish the top spot.

Sauter had an electrical issue for much of the second half of the race, which ultimately caused his truck to stop off of Turn 2 and kill the nose of Crafton’s truck to bring out the eighth caution. Nemechek held onto the top spot through that restart and the next two to grab the victory.

Benjamin and Moffitt followed Nemechek in the final results, with Grant Enfinger and Noah Gragson rounding out the top five.

There were 10 lead changes among six drivers during the race. The caution flag flew 10 times for a total of 68 laps. Snider won the Rookie of the Race.

Sauter leads the points by 29 over Enfinger going into the series’ fifth race of 2018, which will be run over a month from now, on May 4 at Dover International Speedway.