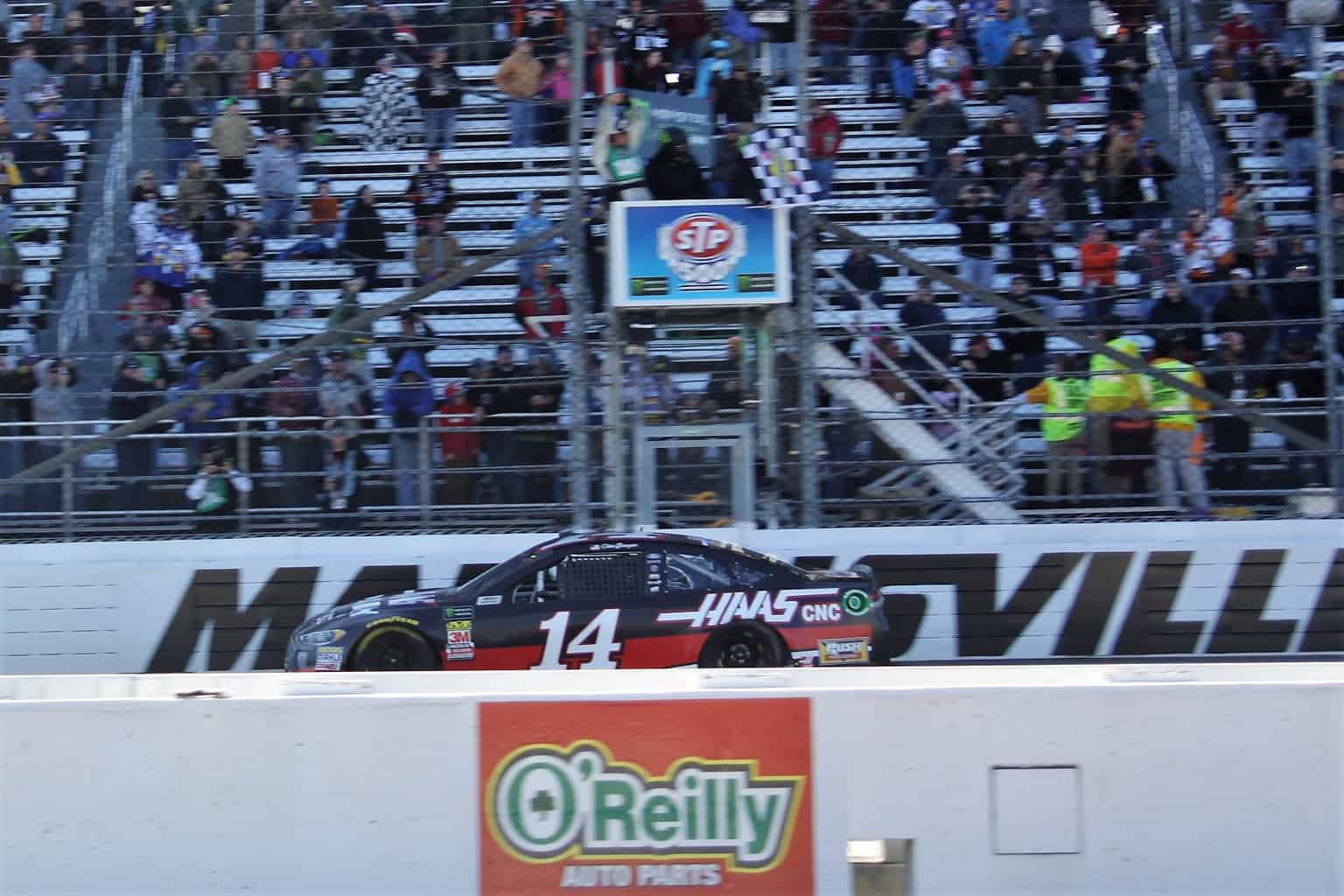 It wasn’t 20 years of trying and 20 years of frustration, it just felt like that. After 190 races, Clint Bowyer finally pulled back into Victory Lane at a Cup race. Bowyer was in the top five at the end of the first two stages and led 215 of the final 216 laps en route to the victory. There have been rumors that Bowyer is racing for his job this season, and this race certainly is going to help solidify his position.

After a day’s delay due to six inches of snow in the Martinsville area, the Cup series went racing and the drivers seemed to be very serious about getting home. The race went 385 laps before there was a caution for an incident on the track. The first stage saw Denny Hamlin pass his teammate Kyle Busch early and lead the remainder of the stage for his first playoff point of the season. Ryan Blaney dominated the second stage to grab the playoff point. Bowyer was strong and led 215 laps of the final stage including the final 114. Kyle Busch finished second for the third time in four races and assumed the mantle at the lead of the points.

With all of the emphasis on short track racing of late in the NASCAR sphere of influence, it was a treat to have the series head to the shortest track on the schedule and put on a show. Interestingly the race went predominantly clean and green but there were comers and goers all day long and the racing was fantastic throughout the field. Getting NASCAR to take dates from mile-and-a-half tracks that are owned by SMI or ISC will be nearly impossible, but this type of racing is continuing to force the narrative and keep the discussion in the forefront of people’s minds.

The talk around Martinsville was the snow. For the first time in 25 years, a NASCAR Cup race was postponed for the white stuff. The Martinsville area received six or more inches of snow Saturday, starting 15 laps into the Truck race. It continued all night and led to the decision to move the Cup race to Monday. The keyboard warriors were out in force complaining about them not running on Sunday night and again when the decision was to race during the day instead of at night. It was just more proof that it is impossible to please everyone. In the end, the safest decision was made and the racing was great.

Kevin Harvick continues to put his money where his mouth is when it comes to local short track racing. Harvick announced this week, through his KHI Management company, that he will have a cash award of $125 for the driver who leads lap 13 at Stafford Speedway. The award is in honor of Ted Christopher, a longtime Modified racer in the Northeast. Christopher raced No. 13 before he was killed in a plane crash last summer heading to a race at Riverhead Speedway.

NASCAR is no stranger to running on Mondays. Of races run on Monday since 2008, Denny Hamlin has won three of them. That is the most of any driver.

A week after Lowe’s Home Improvement Warehouses announced they would not return to the No. 48, Hendrick Motorsports revealed that Axalta will extend their partnership with HMS. The company will do 25 races as a primary sponsor split between Alex Bowman and William Byron over the next two years. The splits for 2020-2022 will be announced at a later date.

PNC Bank has been announced as the official bank of NASCAR. They have signed a five-year contract and will provide their services at select events as well as to teams and participants throughout the sport.

Ricky Stenhouse Jr. had great speed on restrictor plate tracks last year. Prior to that his short track cars were the strength for him. Both races last year at Martinsville Stenhouse finished in tenth place. This season his average finish has been 22.8 over the first six races of the year. The struggles for Roush continue and that has to be weighing heavy on the elder statesman of the organization.

Austin Dillon wasn’t setting the world on fire after winning the Daytona 500 but was finishing solidly in the top 15. After a tenth-place run at Fontana, he came into a short track where he has two career top fives and one finish lower than 18th all of his career. He had issues from the start of the day and it ended with a 30th place finish, seven laps down. Dillon is glad to be sitting pretty to make the playoffs, but he has to want to be running a little bit better than he has been.

Ryan Blaney made the move to a third official car for Team Penske in 2018. His season has started strong with two top five, four top tens and no finish lower than 16th. Sunday was his best run of the season, with a third place run. It would appear that the No. 12 will be in Victory Lane before the end of the season.

Hendrick Motorsports has been struggling this season for sure. Today wasn’t much better, especially with the nine-time Martinsville winner Jimmie Johnson finishing a lap down in fifteenth position. The brightest spot for HMS was Alex Bowman who crossed the line in seventh. After the race Bowman wasn’t exactly happy about seventh place but he has to feel good about his first top ten of the season.

Austin Dillon, Kevin Harvick and Martin Truex Jr. are the three other race winners in 2018. Assuming there are 16 or fewer unique winners in the regular season, they will be locked into the playoffs based on winning a race. Harvick is locked into the playoffs thanks to two victories, assuming he attempts the remaining races in the regular season.The remaining drivers who would qualify for the playoffs and their associated playoff points:

As Martinsville races go, it was on the more boring side for sure. There was one caution other than the ridiculous competition caution and the stage cautions. Three drivers led seven of the eleven times for over 100 laps each, with Bowyer leading 215 of the final 216. However, there was plenty of movement in the field and the great story of Bowyer’s first win in forever and some smaller teams with good runs gives it a little bump. We’ll give this one three Trainwreck Super SMaSHes from Two Witches Brewery

Next week is Easter and the series is taking a break. You can scratch your racing itch with the Easter Bunny 150 at Hickory Motor Speedway. The following week, April 8th at 2:00PM Eastern, the series heads to Texas Motor Speedway. You can see coverage on FS1 and streamed on the Fox Sports Go app. It can also be heard on your local PRN affiliate, www.goprn.com and SiriusXM NASCAR Channel 90.

In baseball vernacular, they would call this a getaway game.

Even with only one legitimate caution, the Martinsville race is still more interesting to watch than any of the 1.5 milers.

budsudz
Reply to  Bill B

Watching Bowyer and Kyle Busch slice and dice through traffic was definitely not boring. Also, NASCAR could have thrown a couple of cautions in the last 25 laps, but didn’t.
This was a race, not a staged event (except for the stages). Be thankful!

Getting NASCAR to take dates from mile-and-a-half tracks that are owned by SMI or ISC will be nearly impossible,

Glad to see somebody acknowledge this.

So now, NASCAR has managed to make even Martinsville boring. Sure, there was some “passing” in the back of the pack as tires wore out – it was more a matter of some cars slowing down less than others, rather than actual passing. But the racing upfront was as boring as California. NASCAR videos should be sold as sleep aids.

Maybe just the Monday morning blahs. I always pictured them at the drivers meeting huddling together and say ” OK guys. Let’s be nice to each other, don’t push the envelope and get this obligatory, day late event over with”.

True, Bobby. I have noticed over the years that Monday races are usually boring, with an attitude of “Let’s get this over with.” And NASCAR seemed to go along with that when they had the opportunity to throw late cautions for two cars with problems at the end of the race, but decided to let the race finish under green.