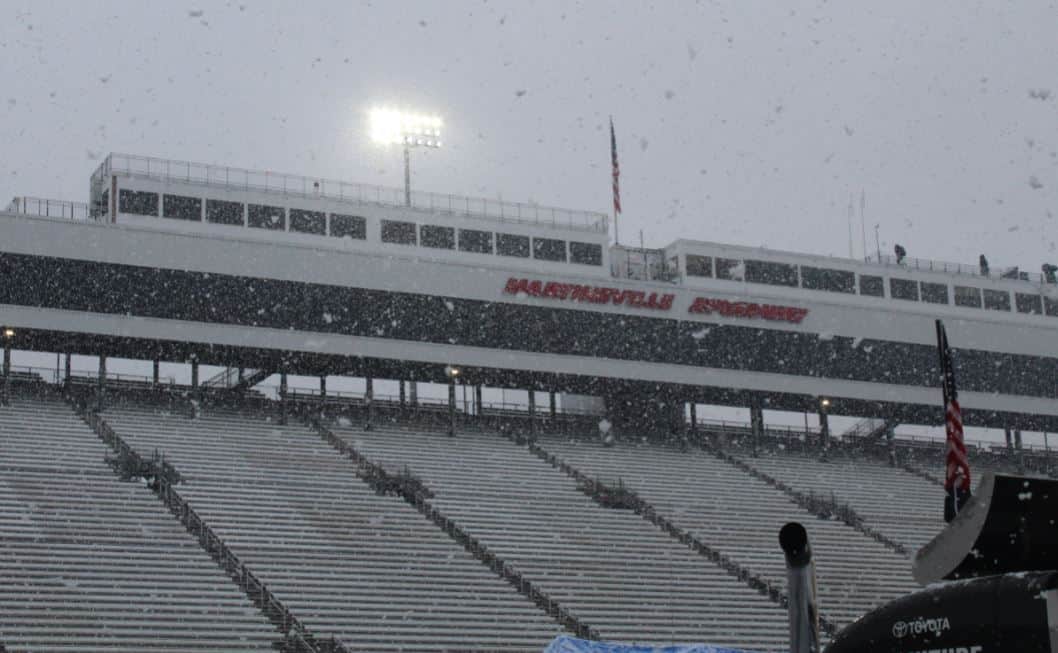 Tough call for NASCAR with the weather this past weekend at Martinsville (Photo: Zach Catanzareti)

This past weekend at Martinsville Speedway, despite the forecast a few days earlier calling for heavy snow, NASCAR waited until the morning of the race to cancel it — to the dismay of many fans. NASCAR instituted a new weather policy last season that allowed for races’ start times to be bumped back one hour should inclement weather be in the forecast. But the call had to be made 24 hours before the race. This move last season was certainly one in the right direction and has already been applied a few times, but does NASCAR need to reevaluate its weather policy?

Weather or Not to Trust the Forecast

NASCAR can’t completely reschedule a race just because somebody mentions the words “rain” or “snow” a couple days ahead of time. If NASCAR did that, weʻd never see a race.

How many times have we seen bad weather in the forecast and it ended up being nothing? The race at Atlanta Motor Speedway earlier this season was perfect proof of that. The meteorologists acted like we were going to get Noah’s Ark-type rain and that there was no chance the race would happen. A little bit of rain did show up, and caused a little delay, but NASCAR got the race in on the day it was scheduled.

You can’t put sole faith in a weather forecast because it is nothing more than an educated guess. I’m not trying to talk trash about weathermen, but let’s just say that if I was wrong as often as they are in my line of work then I would no longer be employed.

I realize that forecasts all week for Martinsville called for several inches of snow on Saturday night, but you especially can’t trust any weather predictions in the state of Virginia, the place where it seems all four seasons can occur in one day.

I grew up in Virginia, so I know the weather there and a lot of the other places that NASCAR races in the region. I can’t count the number of times as a kid that I got all excited because the next day was supposed to be a snow day, only to find the next morning that it hadn’t snowed at all and I still had to go to school.

When I was a student at Virginia Tech, there was an instance where classes for the next day were canceled for snow, then classes were uncanceled 30 minutes later. There were people who did several shots of adult beverages in that 30-minute window who did not have a good next day, but that just shows how quickly the weather forecast can change.

Was the Martinsville fiasco awful for the fans?

Absolutely, but it is not the norm. It was the first race to be delayed a day for snow since 1993, and it probably won’t happen again for another 25 years. NASCAR would have looked a whole lot dumber had it rescheduled the race a few days ahead of time and been wrong. It would have been left with a completely empty track on a beautiful Sunday afternoon.

No matter what call was made at Martinsville, fans would have gotten the raw end of the deal. Most had probably already bought their tickets, booked their flights or hotels and requested the time off from work. They wouldn’t have been able to do anything about most of that stuff.

Had the race been preemptively moved to Monday, then it wouldn’t have changed the fact that most people wouldn’t have been able to go. I truly feel bad for the people with tickets that couldn’t go to the race, but there was nothing NASCAR could do about it to fix it.

The only thing that NASCAR could do in future situations is to either change the policy about ticket refunds and rain dates or give the teams some chains to put on their tires and let them have at it on the snow. Ratings would soar if NASCAR did a race on a snow-laden short track. – Michael Massie

It’s Not Better Late Than Never

Inclement weather has long been public enemy number one in motorsports. High speeds and wet pavement don’t have much love for each other. That predicting the weather is basically a punchline means there’s little that NASCAR can be expected to do except for reacting to the current conditions.

Well, what about when they don’t even react to current conditions?

Case in point: the forecast for this weekend in Martinsville, Virginia called for snow to begin falling Saturday afternoon. The snow was expected to continue to accumulate throughout the evening Saturday. We were told it would taper off Sunday morning but not before leaving anywhere from two to four inches of fluffy white powder on the ground.

Lo and behold, on Saturday afternoon snow began to fall just after the start of the NASCAR Camping World Truck Series race, just like we were told it would. Now I’m no weatherman. I’m personally not really inclined to believe forecasts word for word. But when the prediction matches what is happening outside my window, I’d go ahead and deem that forecast accurate.

What did NASCAR do? They played the wait-and-see card. Snow was falling and rather than pull the plug on Sunday’s on track schedule, NASCAR brass decided to let fans continue their travel towards Martinsville Speedway.

Snow and rain don’t really differ a whole lot in drying a racetrack. The difference in this situation lies with the need for first responders in the surrounding areas. Snow strands motorists and can make roads impassable. Therefore, it gets tough to justify having dozens of police officers directing post-race traffic when there are local citizens who need their help.

The moment snow began piling up on every stationary object at the speedway, NASCAR should have been able to recognize what was going on and adjust accordingly. There was already snow accumulating before darkness fell and it was clear further precipitation would only exacerbate the problem.

So why in the world did they wait until after 7 a.m. Sunday morning to postpone the action to Monday?

There’s no fathomable way that they realistically believed conditions were going to improve from Saturday evening. Temperatures were dropping and so were the snowflakes. I am absolutely certain that the sanctioning body’s leadership had all the information they needed to make the right call a good twelve hours before they actually did.

Social media posts about the announcement were swift and numerous from fans when NASCAR made the delay on Sunday morning. Many were already at the track or had never left the facility from their campsites. These people deserved the courtesy of time to either leave or make arrangements to stay. Hundreds had no choice at that point but to head home, unable to stay for one reason or another. The eleventh-hour schedule change was completely thoughtless of fans in this predicament.

Even media, team members, and drivers were caught off guard by the postponement. Many were also already trackside and those who weren’t likely were en route. They probably figured, as did many fans, that since NASCAR hadn’t pulled the trigger by that point, they weren’t going to.

Who can blame them? There needs to be some defined parameters for making these decisions. I understand the need to be flexible but what was NASCAR waiting for? The people who travel to the track should have some expectation that if the race hasn’t been postponed by a certain time, it won’t be. That way, people who paid a non-refundable sum to see the race won’t be left feeling like their best interest has been overlooked once again.

The last thing NASCAR needs to do is to give fans a reason to stop buying tickets. -Frank Velat

Do these things in advance and you have a hedge against many of these situations where the whole NASCAR can’t control the weather card gets played. Yes, they can’t control it but at least smarter scheduling can reduce some of these situations. We’ve seen enough times at Martinsville since the spring race was moved to March where it has been cold and raw that someone would figure that maybe a March date doesn’t fit that track.

I agree with both writers on this, but Massie put the nail on the head.