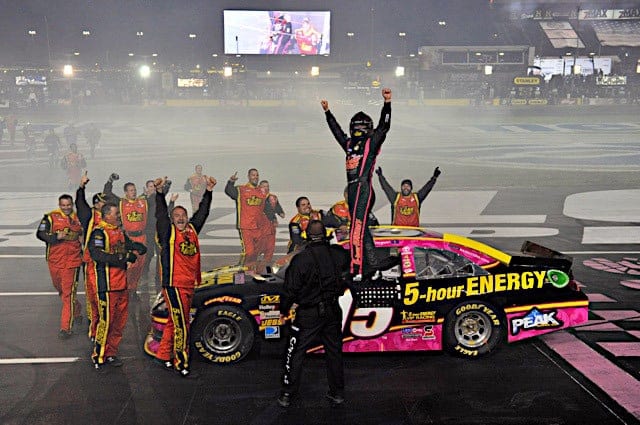 1. More than half the field from the 2012 Bank of America 500 is no longer racing in the Cup Series

Take a look at the field for the 2012 Bank of America 500. One thing fans will be sure to notice is the number of drivers who have exited the Cup ranks since that night. Of 43 starters, 24 are no longer racing in the Cup ranks, at least not full-time. A few, like Landon Cassill, JJ Yeley and Reed Sorenson still run on occasion.

One other full-time Cup driver, Dale Earnhardt Jr. didn’t race that night due to an injury (Regan Smith filled in) but has also since retired.

A few went on to race in different series. Five (Smith, Bobby Labonte, Casey Mears, Jeff Burton and Jeff Gordon for those keeping score) are now television analysts. Three (Burton, David Gilliland and Dave Blaney) have sons now racing in NASCAR’s national touring divisions. In addition, only one of the four drivers who failed to qualify for that race (which puts the entry list at 47) is still racing: Cole Whitt, and he’s running a partial schedule this year as well.

Also, no longer in NASCAR is the team Bowyer drove for, Michael Waltrip Racing.

Keselowski was the first first-time champ since 2006, but three of the next five titlists — Kevin Harvick, Kyle Busch and Martin Truex Jr. — were also first-timers. Only Jimmie Johnson was a repeat champ during those years, and he won two of them, bringing his total career titles to seven.

Bowyer finished seventh in 2013 but hasn’t made a title run since.

Good weekend for our @jimmyjohns team but man an I proud of @ClintBowyer @BugaMike14 and everyone @StewartHaasRcng ?

Johnson may be in the midst of a losing streak of his own right now, but he has earned 25 race victories since Bowyer’s 2012 chart topper. The driver of the No. 48 is currently tied for sixth on the all-time wins list. In October 2012, he was eighth, just below Dale Earnhardt and above Rusty Wallace.  Johnson is currently tied with Cale Yarborough at 83.

4. William Byron became old enough to get a driver’s license

2018 Rookie of the Year candidate Byron was all of 14 years old when Bowyer wheeled his pink 5-Hour Energy machine into Charlotte’s Victory Lane, over a year away from being able to legally drive a car. He was just getting started racing Legends cars. By the time Bowyer won again this weekend at Martinsville, Byron was racing against him.

The famous loaded tube steak underwent an overhaul a few years ago, switching from local favorite Jesse Jones to Smithfield, and the fans were not happy. Sure the toppings—mustard, chili, slaw and onions—remained the same and the dog was still a shocking shade of hot pink, but it wasn’t quite the same.

Starting in 2018, the speedway brought back the original Jesse Jones version, and there was much rejoicing and bragging about the number consumed.

Danica’s cup career came and went during that period.