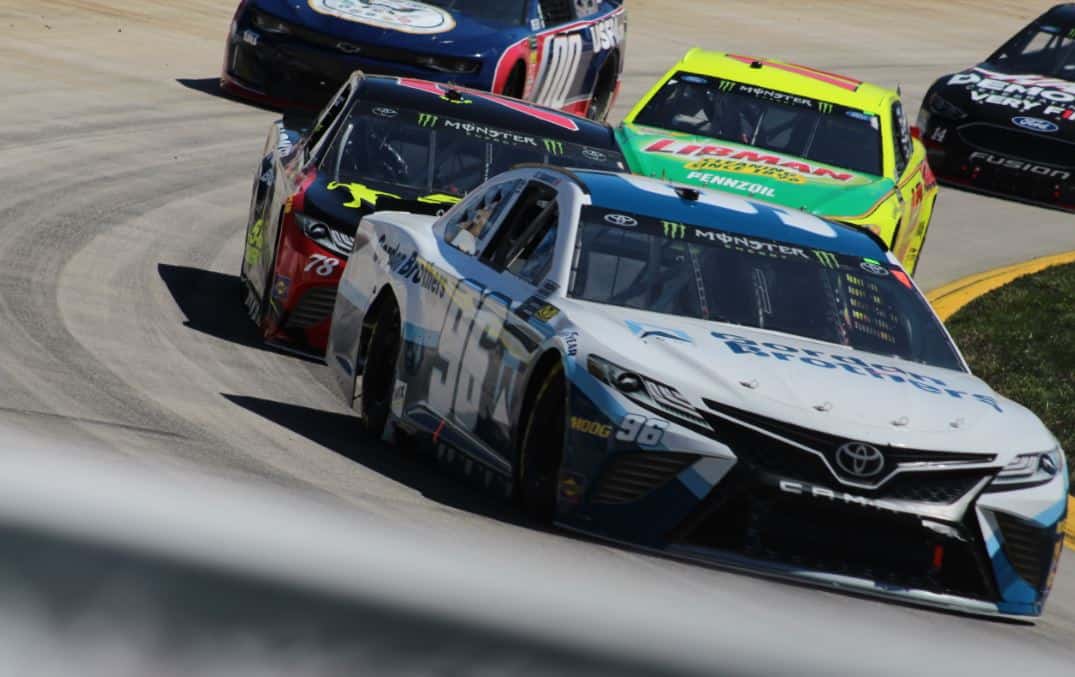 Martinsville Speedway is known to be full of history, and each time we visit the last remaining original track on the circuit, we seem to add another layer. Sometimes those new layers include an underdog story.

The spring weekend of 2018 will be remembered as the snow day, as both the Monster Energy NASCAR Cup and Camping World Truck series were put on hold until Monday due to massive snowfall late Saturday into Sunday. Though it was neat seeing the teams scramble for final adjustments while battling such harsh conditions in a crammed infield, we knew the real difficulty was to come on Monday.

Clint Bowyer taking that long-awaited win sure warmed the hearts of many in the garage, but it’s not what we’d call an underdog performance considering the powerhouse team of Stewart-Haas Racing.

Bower’s victory notwithstanding, there were still a few underdogs that came through in the STP 500.

The Truck Series was the first to hit the pavement — arguably the most “green” pavement we’ve had in a long time — before Cup had its 500 laps. By the time race time came for the top series, the sun was out and the track had a decent layer of rubber down from the trucks.

And surprising to some, the race went fairly clean, posting only one incidental caution on the day. Of course, maybe you wouldn’t have thought so judging from the condition of most of the cars post-race.

As mentioned, the track conditions were a bit of a curveball for all the teams. With about 48 hours between the last practice time to the green flag Monday, there were a few unknowns to sift through.

Perhaps this is what threw our underdogs off more than usual this time around. Generally, a short track like Martinsville breeds a handful of smaller teams near the top 15, with a couple usually piercing through for a top five or top 10.

This time, it was more straightforward. AJ Allmendinger was by far the highlight of the afternoon, earning the title of Frontstretch’s “Underdog of the Race” for the second time in the last three races. His No. 47 JTG Daugherty Racing Chevrolet came home eighth, his best result this year in six races.

But perhaps more impressive is what came in the 499 laps prior to the finish. Allmendinger ran in the top 15, running all but 36 laps in that part of the field. This showed the consistency that JTG has been clawing toward for years. Even coming on a short track, it’s important for the team to capitalize on their stronger suit.

“I think a driver can make more of a difference,” Allmendinger said. “I got a good feel for what I want around here. Just took it in the race and made the best of it.”

The final two drivers who came out of Martinsville with a little smile on their faces were Michael McDowell and Ty Dillon. Usually, when you finish three and four laps down, it was a tumultuous day at the track. However, the three green-flag runs that surpassed 100 laps were partially to blame for that result.

McDowell finished 21st for Front Row Motorsports, his best result since a top 10 in the Daytona 500. Furthermore, he had been outrun by teammate David Ragan in the four races since Daytona, a streak that ended at Martinsville.

Meanwhile, Dillon completes this short group, finishing 22nd for Germain Racing. Nothing spectacular — another mild, quiet day for the organization — but it was a step up from his struggling start to 2018. In fact, it was the team’s best all year.

There were certainly more teams in this category than usual at Martinsville, but I suppose a population as large as Cup Series underdogs are inherently bound to have some struggles.

Chris Buescher was lackluster at a track he did well at one year ago. The then-first-year JTG driver finished 11th in this race in 2017 but was unable to repeat the speed this time, finishing 23rd.

Kasey Kahne was another mid-pack guy throughout the weekend and quietly finished 24th for Leavine Family Racing. He was followed by David Ragan.

JJ Yeley made his first start of the year for Premium’s No. 55. Though showing superior pace against teammate Chastain early, the veteran faded to finish 31st. Matt DiBenedetto matched his car number to finish 32nd.

Darrell Wallace Jr. had significant sway bar issues, forcing him to bring his STP Chevy to pit road on multiple occasions before hitting the garage early in the race. He finished 14 laps down in 34th.

Harrison Rhodes returned to the series for the first time since Atlanta, finishing 35th. Gray Gaulding finished 36th and 2018 debut, Landon Cassill, failing to finish for StarCom Racing in 38th.

The Truck Series had it tough. Not only was their race rudely interrupted by rain/snow on Saturday, but they were thrown onto a fresh track before anyone else. Can’t get any respect around here.

But the underdogs fought back and brought the heat in the 250-lapper Monday morning led by Kyle Benjamin. The debut driver finished second for new team David Gilliland Racing, giving race winner John Hunter Nemechek the bumper in the final corner for the win. Unfortunately for the teen, he failed to complete the run part of the bump-and-run.

Brett Moffitt continued a blazing start to 2018 with Hattori Racing Enterprises, finishing third while Timothy Peters returned to the series to earn seventh for Ricky Benton Racing’s No. 92 Ford.

As far as my DA mistakes… Geez, my @RPMotorsports guys gave me a badass racecar that not only looked good but drove awesome all weekend. One mistake ruined our chances. It's a humbling sport for sure! This one will sting more than others?
Thanks for sticking around fans!

Has bad as it was starting 25 today. Watching @AJDinger work his way through first stage was very impressive to watch. Great top 10 for the 47 team. Stage points in every stage. Great day at the ? for @JTGRacing

Things got hairy for @HarrisonRhodes on the last lap of stage one.@dennyhamlin gets through it all to take stage one of #STP500 pic.twitter.com/SICt5nU25F

I can’t thank Phil & Judy Viger enough for their support, and for allowing me to honor their daughter, Angie Dean this weekend.

Each race reminds us that Bubba and the RPM team are who we thought they were.