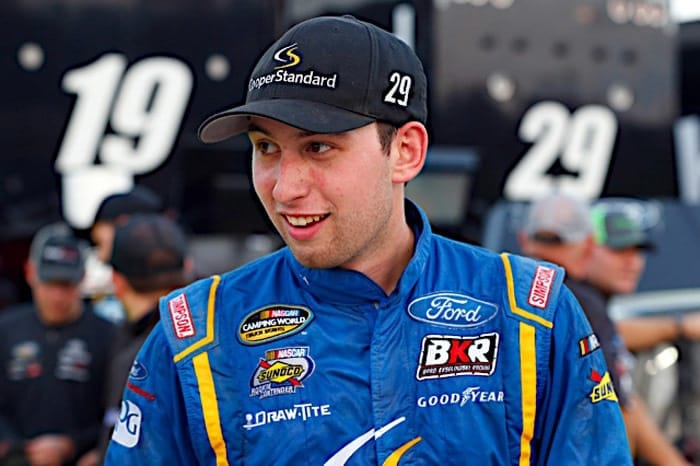 NEWS: SHR will field @ChaseBriscoe5 in five #NASCAR Xfinity races in 2018, beginning with the April 14 #Fitzgerald300 at @BMSUpdates. Briscoe will drive the No. 98 @FordPerformance Ford Mustang alongside SHR teammate @ColeCuster00. Release: https://t.co/BXwtvNcoec#SHRacing10Yrs pic.twitter.com/pqF2cm7tPR

Briscoe will debut with the team at the spring Bristol race on April 14. Other races include April 28 at Talladega Superspeedway (which had already been announced), May 26 at Charlotte Motor Speedway, Sept. 29 at the Charlotte road course and Oct. 20 at Kansas Speedway.

“If you grow up in Indiana racing sprint cars and you want to make a name for yourself in NASCAR, I don’t think there is anyone better to be around than Tony Stewart,” Briscoe said in a press release. “He’s one of my idols. To get the opportunity to drive a Ford for his race team is beyond my wildest dreams.”

Briscoe, 23, from Mitchell, Ind., won the 2016 ARCA championship and was the 2017 Camping World Truck Series Rookie of the Year and Most Popular Driver while competing for Brad Keselowski Racing.

His pre-NASCAR background is in dirt racing, and the past two years he has competed in the Chili Bowl Midget Nationals in Tulsa, Okla., finishing 22nd in the 2017 A main.

He also shares the Roush Fenway Racing No. 60 Ford Mustang with Austin Cindric and Ty Majeski and is scheduled for 12 XFINITY starts in that car. He began his stint with a 15th-place finish at Atlanta Motor Speedway.

“He’s done a great job for his amount of experience,” Greg Zipadelli, SHR vp of competition, said in a press release. “He has a good head on his shoulders and is a racer at heart. That’s the kind of people we surround ourselves with at Stewart-Haas Racing.”