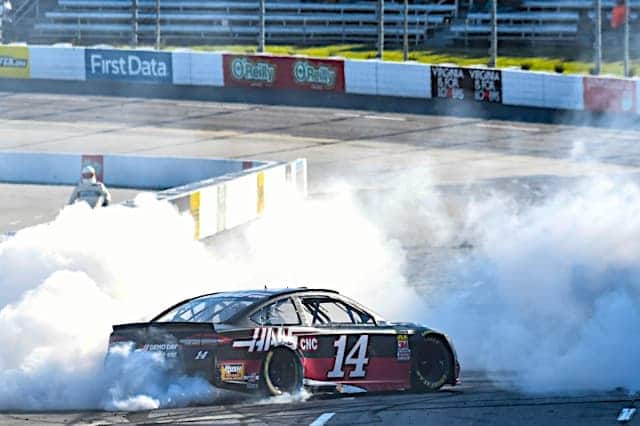 Clint Bowyer‘s 190-race winless streak was nothing to shake a stick at. At the time, it was the second-longest losing run in the Monster Energy NASCAR Cup Series among active drivers who had won previously, bested (or, uh, whatever the negative-connotation version of that word is) by Paul Menard, whose streak out of Victory Lane is approaching 250 races.

But what’s more, perhaps, is the fact that he broke it at all.

When Bowyer prevailed at Martinsville Speedway on Monday (March 26), it not only meant one of the longest winless streaks in Cup had come to a close. It also meant the driver of Stewart-Haas Racing’s No. 14 could join a new distinction in the NASCAR statistics world: longest time in between wins.

And boy, is he up there.

In fact, Bowyer’s 190-race streak between wins ends up the third-longest in Cup history, dating back to the series’ inception. It’s a mark exceeded by just one active driver and leads a plethora of other veterans of the sport who experienced similar droughts.

The following, then, is a top 10 list highlighting those streaks between victories. It’s worth pointing out that such streaks were calculated using just actual starts by each driver, not races (meaning that if a driver didn’t start a race, it doesn’t count — no DNQs or missed weekends entirely), and that the counter starts with the first race after the last win and ends with the last race before the next victory.

Between 1976 and 1982, Marcis went winless in 137 starts (basically during his late-30s). His 1982 triumph that broke the streak, coming at Richmond Raceway in the season’s second race, was his last, though he stuck around for nearly two more decades in the series.

Mayfield’s two most memorable stints in the Cup Series arguably came with Team Penske and Evernham Motorsports, which whom he won all of his five series wins with. But after three wins with Penske between 1998 and 2000, the Kentuckian hit a dry spell that didn’t let up until his third season with Evernham in 2004, when he pointed his way into the playoffs by winning Richmond.

When Dale Earnhardt Jr. joined Hendrick Motorsports, it was supposed to herald a new, winning-laden era for the sport’s most popular driver — and in a way, it did at first, with Earnhardt scoring a 2008 victory at Michigan International Speedway. Then came the next two seasons, during which the No. 88 could barely score a top five, let alone challenge for a victory. That all ended in 2012, when Earnhardt won yet again at Michigan.

Not Labonte’s only 100-plus-race losing streak (check out his early ’90s years, too), but his tougher times between 1999 and 2003 were his lengthiest during the close of his full-time Cup career with Hendrick. His 1999 victory at Texas Motor Speedway might have been his last — and thus would have marked one of the longer winless periods to close a career — until he managed a popular win in the 2003 Southern 500 amid his penultimate full-time season (though he’d show up intermittently before finally hanging up the helmet for good in 2014).

Few probably expected Jamie McMurray to miss out on Victory Lane for over four seasons after scoring a win at Charlotte Motor Speedway in just his second Cup start. But that’s exactly what happened to the Missouri native, running the rest of his initial stint with Chip Ganassi Racing winless. His Roush Fenway Racing career seemed destined to produce similar results until his second season with the team in 2007, when he broke back into the Winner’s Circle at Daytona International Speedway. That said, he’s currently riding one of the series’ longer losing streaks, having missed out on Victory Lane since 2013 at Talladega.

Marlin was lights-out at Daytona in the mid-1990s, but after a victory at the track in 1996, he went cold for a number of years. Then came Dodge’s entrance into the Cup Series, and Marlin was most certainly a beneficiary of the manufacturer’s runaway success early on, taking the checkered flag twice for Ganassi in 2001 and ending up third in points.

After a knockout few years for Roush in the late ’90s and early 2000s, Burton underwhelmed as his career stretched on, eventually departing Roush for Richard Childress Racing… and promptly scoring just three top fives and six top 10s in his debut season with the team in 2005. He could only improve from there, and that he did, taking the No. 31 to Victory Lane at Dover International Speedway in the fall amid a late-career revitalization.

There he is! Bowyer was one of the harder-hit personalities in the sport following the rapid decline and eventual demise of Michael Waltrip Racing, going from three wins and a runner-up points finish in 2012 to ending up with the underfunded HScott Motorsports in 2016, landing just three top 10s all season. But Tony Stewart’s retirement gave the veteran one last shot at success, and though he couldn’t quite pull it off last year, 2018 at Martinsville was the charm. Now to see if he’ll grab any more.

Martin Truex Jr.‘s rise to the 2017 Cup championship is all the more impressive when one realizes how many fans had written him off close to a decade ago. No, really — if you asked viewers in 2012 if Truex would end up a one-hit wonder in the series, there would have been plenty of dissenting opinions on the two-time XFINITY Series champion, who had only won once in NASCAR’s highest level — in 2007 at Dover. Finally, he triumphed at Sonoma Raceway in 2013, and while he still might have appeared on the way to an altogether underwhelming Cup career at that point, well, here we are now.

Like Marlin, another beneficiary of the Dodge boom of the early 2000s. Following many hit-or-miss seasons driving for his own team, the series’ long-running Most Popular Driver award winner moved to Evernham’s fledgling team — an organization that also helped Mayfield out of a jam — and its No. 9. Maybe he wasn’t a bona fide star results-wise that year, with five top fives and nine top 10s to his name by season’s end, but once he won from the pole at Homestead-Miami Speedway in 2001, an otherwise middling season was long forgotten — and the best was yet to come.