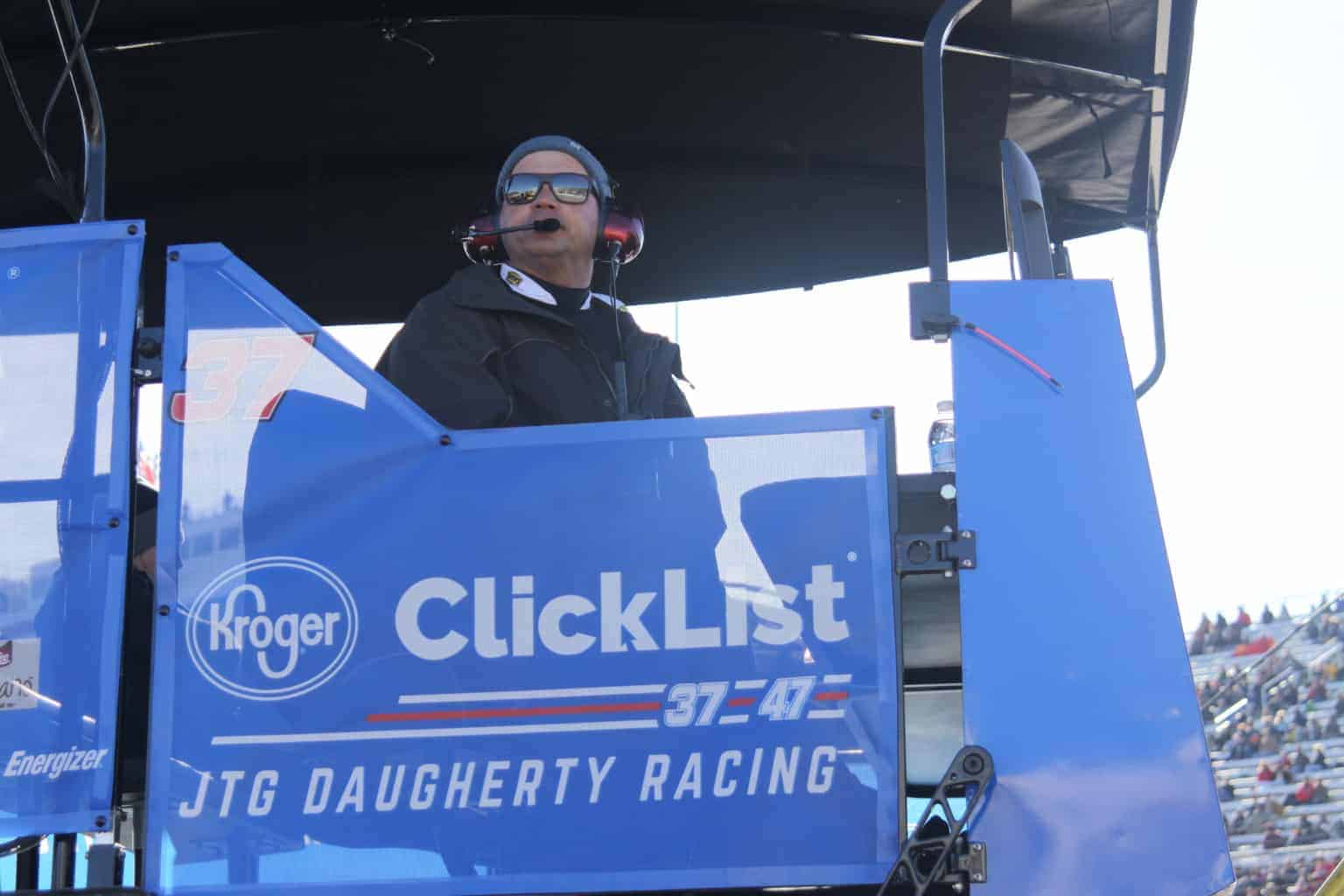 The Monster Energy NASCAR Cup Series survived Snowmaggedon 2018 at Martinsville Speedway and is now on Easter vacation — and with the season six races old, we’re taking a little different look at the season through the eyes of a crew chief.

In this edition, Chris Buescher’s crew chief Trent Owens looks back at the beginning of the year from the No. 37 team’s perspective, and analyzes what has been good and what has not been so good.

Mike Neff –  How do you feel like your season has shaped up so far?

Trent Owens – Not too bad, really, from a performance standpoint, [though] we haven’t gotten the finishes that we are looking for. We’re really happy about the performance of the car at Las Vegas [Motor Speedway]; we came away with a decent finish there. Happy about the performance of the car at [Auto Club Speedway] as well. We had a flat tire there with 10 laps to go, which ruined our finishing position. At least at the intermediate tracks we’re in a lot better spot than where we ended the year; that is what you want to do… improve your cars over the winter and hopefully see the improvements when the season starts, which we have.

Our short-track program, [ISM Raceway] and Martinsville, were both a struggle for the No. 37 team. The No. 47 car [driven by AJ Allmendinger] ran really competitively at Martinsville, so hopefully, some of the things that they were doing can help us in the future. We’ll look at all of that going forward.

It was great seeing one of our cars being a top-five car at Martinsville. It looks like we made it better than we were there last year. We’re now looking forward to Texas [Motor Speedway], which, for us with Chris driving, is one of his favorite tracks, so it is one we always circle at the beginning of the season.

Neff – You have new rules that went into effect for 2018. Since Daytona International Speedway, do you feel you’ve made strides in making your cars faster with the new rules?

Owens – Yeah. Daytona and Talladega [Superspeedway] are on their own island, so to speak. We survived Daytona and had a great finish there. I want to be top 20 and pushing into top 15s at intermediate tracks, and we weren’t there at the finish of 2017. With the new scan process that NASCAR has put in place along with the new splitter and some other things, I feel like our car against the other competition was at least better than we ended the year. We still need to get about another tenth of a second of speed out of the car.

I’m really looking forward to Texas and seeing what we have there. After what we found at Vegas and California, now that we’re back on the East Coast and we can do a little more work on our cars, since they aren’t being shipped all over the country, I think we can be a little more competitive there.

Neff – You are in a new Chevrolet this year. There was a lot of work, especially by the bigger teams, figuring out the new car. Do you think the Chevy teams have come out of the box as fast as they thought they would after the amount of effort that went into the car during the off-season?

Owens – The Camaro has been a help for us. … The drivability, the driver feedback, it is a better balanced racecar for this lower downforce package that we’ve switched to it. From that side of things, it is a better car for us.

As a whole, the Chevrolet camp expected more, probably thought there would be more speed than any of the teams have shown. There is some more work to be done to completely understand it. However, from where I’m working, we have a lot better balanced racecar, especially on entry into the turns. We just have to figure out how to get it quicker on exit and faster throughout the turn.

In time, it is going to be a better racecar. To your point, it is a little disappointing, I guess, since we don’t have the speed that we thought we were going to have. I know it is there, we just have to understand the car a little bit better.

Neff – Does it seem like the pit gun problems are starting to get cleaned up a little bit as the season goes along?

Owens – Yeah, a little bit. It is a change. Our sport — and the people that work in our sport — are really tough about not wanting to change. It is a situation where the guns are definitely slower. It is a less-engineered gun than we’d started using. The hand speed of the changers themselves have had to slow down.

It’s definitely been interesting, to say the least, with getting used to the guns. It has been tough rolling them out like they did at the beginning of the season. They’ve addressed any problems they have had immediately. For the most part, those problems have been fixed. They are trying hard.

Neff – Do you think you have your process and the cars that you’ll need to run through the next couple months in the state you need to succeed?

Owens – Yeah, I feel like, for our size [of a] race team, we’re doing a really good job. As I talk to you today, our Texas car is ready to be set up on Monday. That car is well ahead. Our Bristol car will be on the floor Monday, ready to be assembled. Even with the West Coast swing, I feel like we’re in a good place.

Now, the only thing you can’t predict [is that] our total inventory of cars is not that large. If we get into a situation where we have some misfortune on the track, that is going to put us behind. Right now, I feel like our systems that we have in place are doing a really good job of getting our cars to us in time to prep them like we need to with the proper details to be fast on the racetrack.

Neff – You used to have an alliance with Richard Childress Racing, but now you only use the Earnhardt Childress Racing engines. For the most part, you’re on your own. How is that working out for you this year?

Owens – We’re on our own. We build our own front clips now. We do lease ECR engines, and we use the Hendrick Motorsports simulation tools. We have been forced to look at our racecars and make them better, and we have. The challenge will be sustaining a level of performance, which is what is really hard for a small team. Usually you can build the first wave when you have time over the winter and make good gains. However, as the season goes on, sustaining and continuing to build is where you have to be careful and hopefully do the right things.

Neff – Has Buescher gotten better as a driver? Or it is more that the two of you have become a better team?

Owens – I think, as we are in our second season together, we’ve definitely become a better team. I think he has gotten a lot better in his feedback and his confidence in what he needs to feel in order to go race. He’s been able to get me to really get the cars a lot closer.

This is my fifth season in Cup racing and I’d hope that I’ve learned (laughs) through making some mistakes, how to be a little better at preparing the car, as well. I think it is a team effort, and I think this is going to be a really good season for us. I’m really happy about some things that we’ve done on track. I just wish the finishes would reflect some of the gains we’ve made. We had a loose wheel at Atlanta [Motor Speedway], a blown tire at Phoenix, flat tire at California, and all of those races we were running really well. We’ll see as the season goes on.

It is really good working with Chris. I think he’s developed into a confident driver who knows what he needs and is really capable of getting up there and running with anybody.

Neff – Is the sport to the point where those minute little changes are what gain you tenths of seconds vs. the big things that teams used to find in order to go faster?

Owens – It is down to that; it is down to the road crew adjusting 32nds of inches. Every little detail. I don’t know if you’ve read the rulebook lately. They basically tell you how to build the racecar and how they want the racecar built with very little tolerances, so the smallest items are the ones that make the big differences.

When talking about the Camaro this year, you can’t leave the teams out. Ganassi has been relatively inconsistent for years, last year was an anomaly. Their performance so far this year isn’t much different that their performance a few years ago. RCR has struggled to put cars consistently into the top ten for years. Last years two wins was also an anomaly and broke long winless streaks for both drivers. RCRs performance with the Camaro is not much different than years past. Hendrick is still considered a Cup Superpower, yet their performance as an organization has been lack luster for several years. Jimmie/Knaus has been the only consistently high performer at HMS for the last 8 to 10 years. Chase was the top performer last year, yet he went winless. HMS is looking like Roush during their downfall. It is possible that the lack of performance has as much to do with the current Chevy teams as it does with the aero peccadillos of the Camaro.

good points. with the modern nascar the difference is strictly down to the teams, not the cars.

RUSS & MOPARJEFF JUST HANG ON NASCAR WILL FIX THERE PROBLEMS BECAUSR GOVERNMENT WILL STEP IN & MAKE THERE VOICE HEARD.