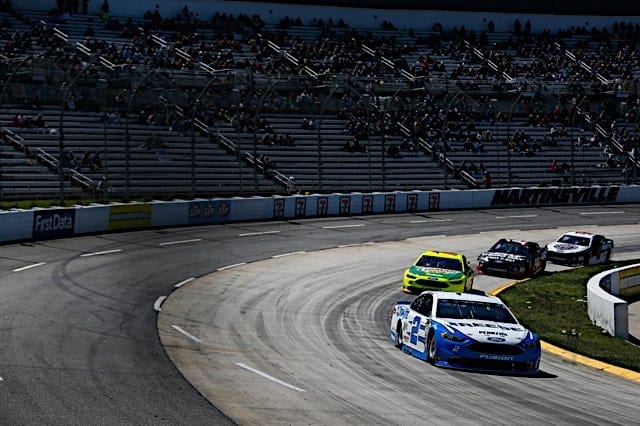 Heading into the Easter weekend break, there are a number of notable items that are ripe for discussion at this point in the Monster Energy NASCAR Cup Series season: who’s hot, who’s not, the usual state of the sport hand-wringing that has become en vogue the past few (well, several) seasons, and what we can expect now that we’ve blown through the West Coast swing and have few races under our belt so far in 2018.

Let’s take a look at who’s trending upward, who’s going down and what else there is to think about before the engines fire up again.

Stewart-Haas Racing has put the NASCAR world on notice that its first-year Ford growing pains have turned into GAINS, brother.

If not for Austin Dillon‘s bumper-buster going into Turn 3 on the white-flag lap in the Daytona 500, SHR would be looking at three of their four drivers in the playoffs already, and would have gone five for six in 2018 — and had Kevin Harvick not been as aggressive early on at Auto Club Speedway, it’s not unrealistic to say it’d be undefeated this year.

Clint Bowyer‘s win at Martinsville Speedway has proven to be a popular one and has put the other teams on notice: This is an organization that doesn’t really have a weakness in its armor at this stage of the game. They’ve been the cars to beat on restrictor plate tracks, intermediates and short tracks.

Factor in the three Team Penske entries of Ryan Blaney, Brad Keselowski and Joey Logano, and it would appear that the Blue Oval is the brand to beat so far in 2018. It doesn’t do much to support Keselowski’s assertion late last year that the Toyotas were in another league, and that Ford was out to lunch until the Fusion was replaced by a different model. Six races into the season, and that appears largely debatable.

Chevrolet’s new ZL1 Camaro sure does look bitchin’ in race trim, but once the race starts, it’s a different story.

The Bow Tie Brigade has been singing a bit of the new car blues, despite the No. 3 Richard Childress Racing Chevrolet’s Daytona 500 triumph. That pointy proboscis that moved Aric Almirola out of the way seems to also be creating a bit of a balance problem thus far. Pinned at the nose from making all that front downforce, the
Camaro is a bit loose for most teams, though Kyle Larson wheeled it to a third-place finish at Auto Club Speedway. Then again, Larson seems to run best when he’s hanging it out against the wall, so that shouldn’t come as much of a surprise.

That Jimmie Johnson has yet to register a top-five finish seems a bit odd, but lends credence to the teething period the new car seems to be having.

That said, let’s give the Chevrolet teams a bit longer to figure things out. There really wasn’t a lot of time to make changes while on the other side of the country, with cars prepped and loaded weeks in advance. Texas Motor Speedway might be too soon to see some changes, but once the teams get through Bristol Motor Speedway, Richmond Raceway and Talladega Superspeedway, it’ll be on to Dover International Speedway and Kansas Speedway. While it will be mid-May at that point, the Chevy teams should have a handle on what they’re working with by the time they get to Charlotte Motor Speedway for the Coca-Cola 600.

If they don’t, the summer stretch is going to be a painful one, particularly if the Ford and Toyota teams continue to ramp up wins and stage points, solidifying their playoff positions.

Something New to Complain About:

What was supposed to be a weekend worth looking forward to at Martinsville ended up being an unfortunate turn of events weather-wise. Everything leading into the return to NASCAR’s oldest track was lining up nicely — talk of hot dogs, Darrell Wallace Jr.‘s No. 43 looking right with race sponsor STP livery and one of the old-school tracks that everyone looks forward to visiting twice a year.

A spring snowstorm popped up Saturday night and ruined the party on Sunday, leading NASCAR to cancel the race due to first responders needing to tend to actual emergencies outside of the racetrack, and the south being unable to cope with what we up north deal with for five months a year.

Sorry, have to get that dig in whenever I can.

These untimely events put NASCAR in a no-win situation. The roads leading to the track on raceday were mostly clear, but what about parking and getting people in and out of the track safely in weather many in this area aren’t accustomed to or in vehicles equipped to negotiate frozen weather? What are the chances that a bunch of cars would have ended up getting stuck with no tow trucks available to pull them out as they were tending to other incidents in the area? Then people would have been complaining that it was too cold, the bleachers had ice on them, and how much fun it isn’t to sit and watch a race when it’s 35 degrees out.

It’s common sense that if you’re going to a race on Sunday, it’s a safe bet to take Monday off in case of a rain delay — or at the very least, in case you get after it too hard and don’t feel so hot the morning after, particularly during the summer. I went to the 2012 Daytona 500 as a spectator, enduring a 36-hour rain storm followed by a racetrack engulfed in flames. We didn’t get back to our hotel room until 2 a.m. Tuesday morning.

Best part? I had a job interview Wednesday at 11 a.m. So you know what I did? I dealt with it. A couple of Monsters and a shot of 5-Hour Energy, hauling 21 hours nonstop back to Michigan. Oh, and we ran into an ice storm upon entering the winter wonderland at 11 p.m.

Why bother getting all twisted up over something you have zero control over — and nobody else does, either? Just because you have an instant electronic forum doesn’t grant you grieved status. It is a shame, though, what took place, as a terrific Camping World Truck Series race that virtually nobody watched took place on Monday morning, while some were just getting off work as Bowyer’s son, Cash, was running down the frontstretch toward him in what might become one of the most iconic Victory Lane images in motorsport history.

If I had my druthers, I would have suggested holding off on starting the Truck race until 3 p.m. and running the Cup race in prime-time under the lights. Judging by the stands, there wouldn’t have been that many more people that bailed on it than did on Monday. Sure, it might have been cold, but people gut it out in Green Bay in colder temps, and we pack in over 100,000 here for outdoor hockey games here. It also would have been a nice test for the lights and NASCAR in prime-time on a weekday again, something that is often suggested as yet another way to help
buoy ratings and viewership.

After the drubbing laid on the field by the winners of Atlanta and Auto Club, I’m not so sure that following things up with a five-second margin of victory at Texas is going to do much to generate excitement from the fans next weekend.

When a Martinsville race is as boring as Monday’s race was, it’s silly to lament the boring races at Texas or Fontana. NASCAR has managed to make ALL of its races boring at any venue.

And to call any part of this race or its aftermath “one of the most iconic Victory Lane images in motorsport history” goes beyond hyperbole to sheer silliness, especially since so few fans saw it.

Finally, running the race Monday night would have been even worse than running it on a Monday afternoon. It was obvious the teams and the fans just wanted to get this thing over with. And whenever a sport falls into the category of “let’s get the event over with,” it has definitely jumped the shark.

TV coverage is really to blame for most boring races. I’ve been to Fontana 5 times in the last 15 years and have never seen a boring race in person. Now, on TV, that’s a different story.

True, nascar and Fox coverage, have managed to make all the races boring. And attendance and viewership numbers reflect this. At this point in time, there is no end in sight for the weekly decline in nascar until the current tv contract runs out. Then it will get real interesting very fast. By my count there are now at least 13 way underfunded cars starting in Cup every weekend. And as the year drags on that number is going to grow. Richard Petty had almost full sponsorship for only 6 races this year and we have faced 6 races so far. What happens next, will Richard fund the cars himself soon out of the huge memorabilia sale his family foundation is having in May. I don’t think his youngest will allow that lol. By years end the number of outside fully funded teams will be in the mid teen range and that is scary for Brian. It should be a huge slap in that red face of his. But we will never know because Brian is in hiding and hasn’t been seen since Daytona.