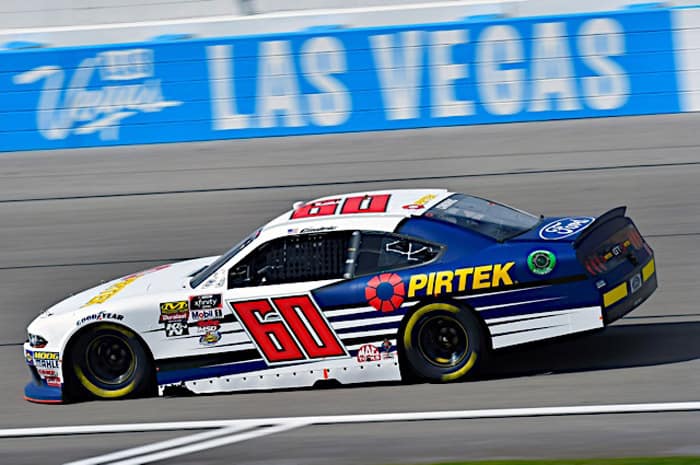 Austin Cindric was in unchartered territory coming into the 2018 season, knowing as a rookie he would be competing in the full NASCAR XFINITY Series schedule with three different teams and two organizations.

Fast forward five races and Cindric has stumbled out of the gates, with a best finish of seventh at Atlanta Motor Speedway with Team Penske. Meanwhile, two of his four starts with Roush Fenway Racing have resulted in DNFs due to crashes at Daytona International Speedway and Las Vegas Motor Speedway.

“It hasn’t been a great start by any means, but I think I’ve learned quite a few lessons and heading into the summer I think everyone, including myself, is going to be more prepared,” Cindric told Frontstretch. “I’m learning the steps that drivers need to learn to be in that position. They are the same lessons that I went through in the Truck Series, just trying to understand where I need to be the most effective as a racecar driver.”

Cindric, 19, is coming off a Truck Series season in which he was a part of the championship race at Homestead-Miami Speedway, finishing third in the title battle. But just like last year, he expects that it will be a constant battle throughout the season, and shall he be playoff eligible come Kentucky Speedway in September, he may have a shot at the title.

“There is a lot of time, but it’s a lot of time that I need to spend on bettering myself and better-preparing myself to be in those positions. I need to look at the path I made for myself last year in the Truck Series to where I came from to where I ended and kind of stride for the same.”

Competing with three different race teams has its challenges, according to Cindric. Thus far, he has had veteran crew chief Mike Kelley calling the shots in four races, while Matt Swiderski sat atop the pit box when he competed in the No. 12 car at Atlanta en route to the seventh-place finish. Next weekend at Bristol Motor Speedway, Cindric will get his first shot of the season in the No. 22 machine with Brian Wilson leading the way.

After shutting down one of its programs last season, Roush Fenway Racing has Cindric, Chase Briscoe and Ty Majeski making up a full season in the No. 60 car. However, a lot of the team is “pretty fresh to stock car racing.”

In comparison to other rookie drivers, it’s unique for Cindric to be competing with three different teams. But of course, it can make for a lot of anxious moments.

Because Brad Keselowski Racing shut down at the end of the 2017 Truck season, it forced Cindric to make a move, and up the ladder, he climbed to the XFINITY Series, though at the time he wasn’t sure if he was ready.

“I feel like if BKR wouldn’t have shut down, Chase [Briscoe] and I both needed one more year in trucks to be fully prepared,” Cindric said. “I feel like my learning curve had a bit of a forced-acceleration, but it’s one of those scenarios where you have to swim to the surface and do your best. I feel like I have the people around me to best prepare me.

“It’s just about learning in the right situations and getting myself to where I am prepared to fight for fifth, wins and then a championship the time that the playoffs come around just like the truck season last year.”

Currently, Cindric sits 18th in the championship standings, 48 markers behind Kaz Grala, who currently holds the coveted 12th position. However, for the next seven races, he will be competed with Team Penske, returning to Roush Fenway Racing at Michigan International Speedway in early June.

Last season both William Byron and Daniel Hemric made the Championship 4 at Homestead in their rookie season. Cindric fully believes that he has what it takes to make the playoffs, then hopefully fight for the title.

“I think so, especially with the teams I’m driving for and the equipment I’m in,” Cindric said on whether or not it’s expected he makes the playoffs. “I don’t see any reason why I can’t. I think last year the XFINITY Series wasn’t quite as competitive as it is this year. I feel like there’s a lot of good drivers and a lot of good cars, and I think that’s good for me because I’m racing in a competitive series with really good guys racing against the best.”

The series heads to Texas Motor Speedway this weekend where Cindric finished second last November in the Truck race.